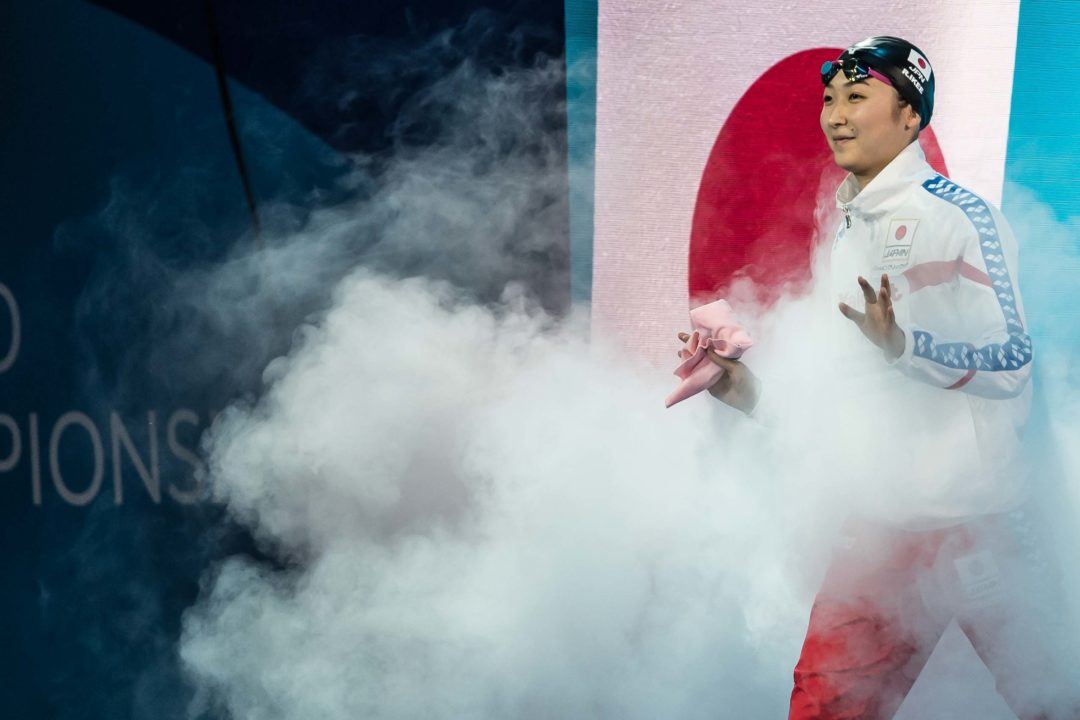 After earning an honorable mention in last year’s Swammy Awards, 17-year-old Japanese phenom Rikako Ikee earned her spot as top female junior swimmer in the world for 2017. Firing off national records and World Junior Records in almost every final in which the teen competed, Ikee has filled out her resume with field-crushing swims at both the junior and senior levels.

Ikee kicked off 2017 with impressive post-Rio performances at the Kosuke Kitajima Cup in Tokyo, blasting a national record in the 200m freestyle in a mark of 1:56.33.  That hacked over 2 seconds off of her 1:58.49 performance at the 2016 Olympic Games. Showing her versatility, Ikee also racked up a World Junior Record in the 200m IM at that meet, setting the mark at a speedy 2:09.98.

One of the few teenage swimmers who made both her nation’s squads for the World Championships at both the junior and senior levels, Ikee’s highest finish in Budapest garnered her a 6th place finish in the women’s 100m butterfly. Her time of 57.08 was within striking distance of her monster 56.86 produced in Rio last year.

Ikee was much more dominating placement-wise at the World Junior Championships in Indianapolis, however, where she nabbed 3 individual titles, taking the top prize in the 50m fly (25.46), 100m fly (57.25) and 50m freestyle (24.59).  All 3 performances resulted in championship records, with the 50m fly also scorching a new World Junior Record.

Not resting on her laurels, the Japanese teen crushed 2 more national records at the FINA World Cup stop in her home city of Tokyo. Ikee earned a mark of 57.75 in the 100m IM and 25.14 in the 50m butterfly, both of which checked-in as a new WJRs.

With the Tokyo Olympics now less than 1000 days away, Ikee’s trajectory has the teen on a path towards host country glory come 2020.

Regan Smith (USA) – A breakout star for the United States at just 15 years of age, Smith raced her way to a gold medal in the 100m backstroke at the World Junior Championships. Her swift time of 59.11 beat out Canada’s Taylor Ruck and claimed a World Junior Record in the process. On the mixed medley relay, Smith outdid herself one further, cracking an opening split of 58.95 to help boost the stars n’ stripes to silver in that event in Indy. Smith also did damage to the individual 200m backstroke, firing off a personal best of 2:07.45 to win gold by well over a second for another championship record.

Li Bingjie (CHN) – At 15 years of age, China’s Li Bingjie already has 3 senior World Championships medals under her belt. In Budapest, the teen freestyle specialist earned silver in the women’s 800m freestyle, followed by bronze in the 400m freestyle event. She was also a crucial member of China’s silver medal-winning women’s 4x200m freestyle relay. Competing at the Tokyo stop of the FINA World Cup Series, Bingjie cranked out a new World Junior Record in the SCM 400m freestyle, registering a new mark of 3:59.14.

Ariarne Titmus (AUS) –  Ariarne Titmus has been taking Australian mid-distance swimming by storm, overtaking 2016 Rio Olympian Jess Ashwood as the premier freestyler to keep chasing America’s Katie Ledecky. Surprising the field in Budapest by finishing 4th in the women’s 400m freestyle, Titmus took things to another level at this month’s Queensland Championships, scoring a new Australian National Record in the event. Her time of 4:02.86 checked in as a new NR and personal best to give her momentum heading into next year’s Commonwealth Games Trials.

I get declaring Rikako Ikee as the junior of the year. Lots of great performances this year. But considering Taylor Ruck is officially the most decorated athlete in the history of the World Junior Swimming Championships, not to mention the amazing December she’s had, she’s far more worthy of being an honorable mention than Reagan Smith. That’s not a knock against Reagen, who still had a good year in backstroke. But Taylor Ruck shows consistency in both freestyle and backstroke, in both long and short course. For one, she’s now the only junior female besides Penny Oleksiak to swim the 100m freestyle in less than 53 seconds. She tied the Canadian record in the 200m freestyle long course as part… Read more »

I think I need to see a bit more from Ruck before describing her as “consistent”. She has certainly looked like she is heading that way over the past few months but the real test will be at the next Canadian trials meet. Her last two trial events have been well down on what she’s capable of. There was some suggestion of injury at the Olympic trials but it may have been nerves in 2017.

She was ill in 2016, not injured. She said something about not training hard enough before the 2017 trials in an interview, and really stepped it up after failing to make the national team, but otherwise I won’t argue.

Swimmer- No Canadian trials in the spring of 2018 … next big meet for Ruck is the Commonwealth Games in March.

Interesting choices here. On the one hand you’ve got Ikee with the multiple world junior records and golds in addition to multiple NRs. On the other you’ve got Bingjie who I don’t believe competed at the juniors at all, broken only (I say that not to belittle, just as a comparison to Ikee’s many records) one WJR. However she has 2 individual medals at world champs, and the junior records in those two events are ridiculous due to a certain US swimmer. I may may agree that Ikee has had the better year as a junior swimmer, but Bingjie has had the better year as a swimmer, if that remotely makes sense.

On that note I wonder how these decisions… Read more »

Bingjie might be getting female breakout swimmer or Asian swimmer of the year so it might be a spread the wealth type of thing, especially when Bingjie did not focus on any junior competition

That’s a good point. It’ll be interesting to go over all of these awards when it’s all done , especially looking at people who could fit into more than one category. I think you’re right though now you mention it, I remember something like this happening last year e.g. Someone winning a continental award but not winning their country.