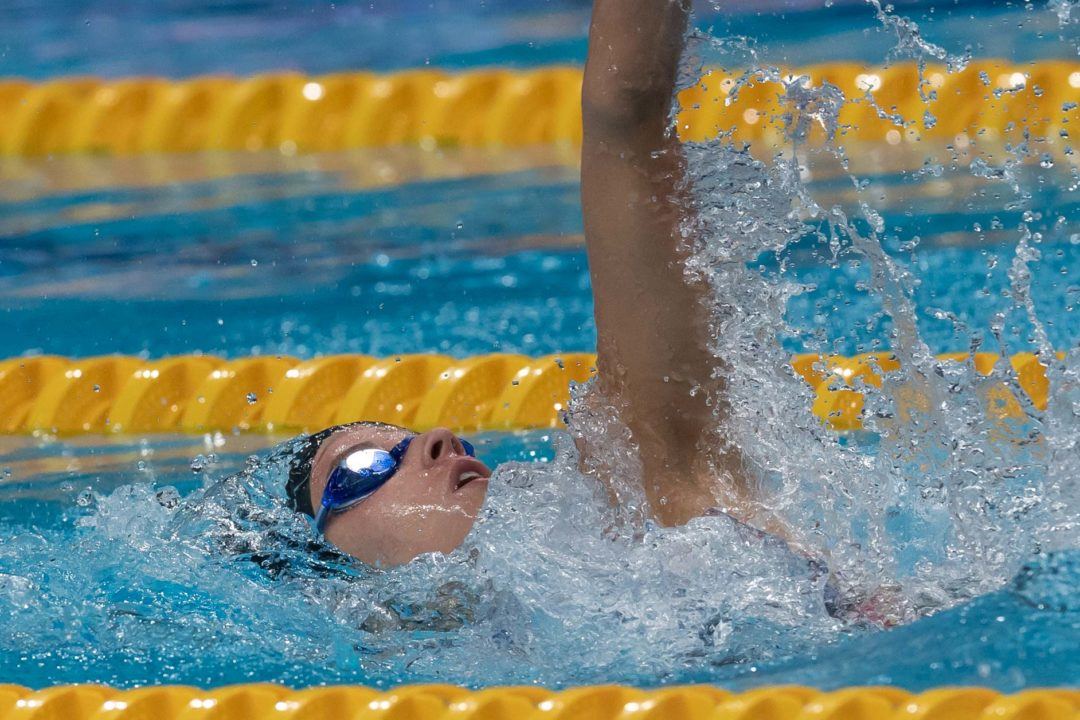 Regan Smith equalled her junior world record in the 100 back leading off the medley relay. Archive photo via Mike Lewis/Ola Vista Photography

Regan Smith equalled the junior world record she set in the 100 back final leading off the American medley relay, touching the wall in 59.11 for the second time this week.

Smith was a bit more aggressive on the front half in the relay, out in 28.46 compared to 28.70 in the individual race. She went even better in the mixed medley relay, leading off the U.S. in 58.95, which does count as a national age-group record but not as a junior world record (due to a FINA rule relating to males and females competing alongside one another).

Smith’s first swim of 59.11 broke the record set by Taylor Ruck in the semi-finals of 59.28. When Ruck broke the record, she lowered Australian Minna Atherton‘s mark of 59.34.

What a great season! Hope she continues to improves and reaches a higher level in coming years. What sets her apart from other promising young stars with great talents is that she is humble and has great support system (Dad is a swim coach, Coach Mike P’s experience, etc.). Speaking of coaching, this past week she was coached by her coach Parratto and head coach Lundsten, a master backstroke coach (also from Minnesota) who has coached some of best backstrokers include Bootsma.

Her next major event will be 200 Fly. Didn’t swim it this year but by next summer, with added strength, will be very competitive. Likely 2:09 low range or better. And congrats to coach Mike Parratto. Doing great work w Smith.

Three possibilities here, in my mind:
1) Smith continues on this trajectory and becomes an insanely fast backstroker, fighting for gold in 2020.
2) Smith’s improvements in backstroke level out around 58high and 2:06, but she improves her other strokes and becomes a world class 200 and 400 IMer by Tokyo, while still having backstroke as her best stroke.
3) She just gets stupidly fast at everything, becoming an insane IMer and backstroker, not unlike Hosszu (which is a funny comparison because IIRC backstroke used to be Hosszu’s weakest stroke).

The women’s 100 back is blowing up! So much depth.

definitely if she continues to progress in 2019 world she have the chance, 200 back is harder though.

I wish people would stop with these crazy predictions. Yes she had potential, but let her build to it. Don’t put such high expectations on her shoulders.

Totally agree with you. Enough with the crazy predictions and crowning of the next phelps or Franklin. Continuous improvement is the goal. Focus on effort not times.

Smith is having an amazing year. Congrats to her. Can’t wait to see much more from her.