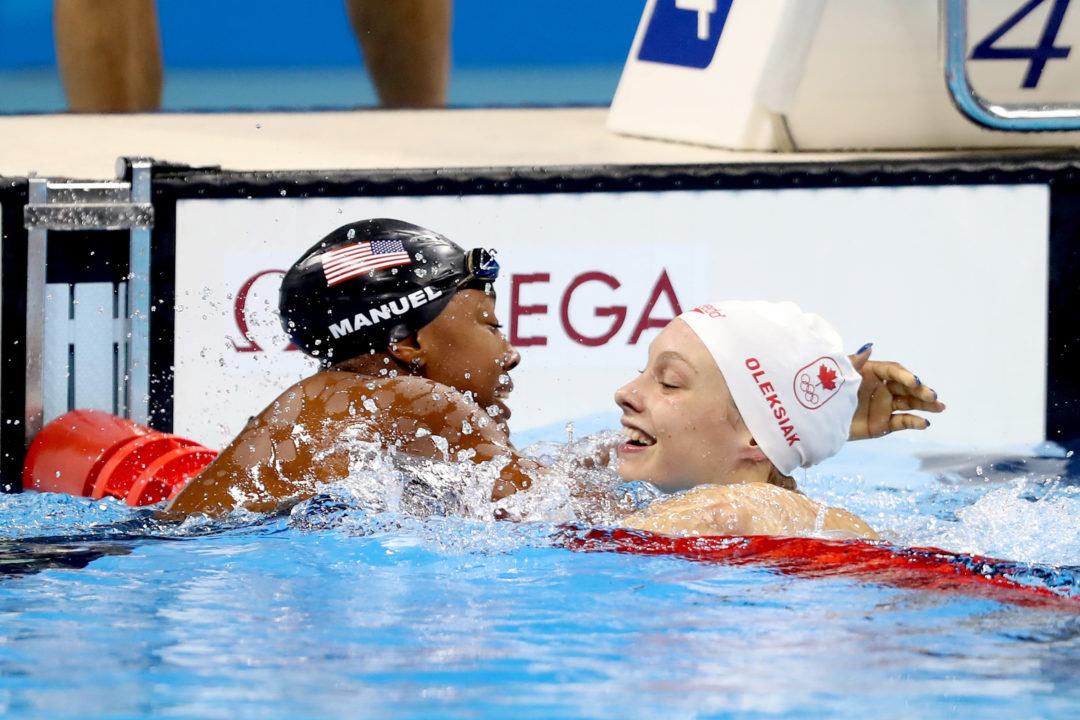 Surfing atop the new wave of Canadian swimming was Penny Oleksiak, who capped off an impressive summer in Rio with an Olympic gold in the 100 freestyle, where she tied with American Simone Manuel. Archive photo via Simone Castrovillari

Surfing atop 2016’s new wave of Canadian swimming was Penny Oleksiak, who capped off an impressive summer in Rio with an Olympic gold in the 100 freestyle, where she tied with American Simone Manuel. She also added a silver in the 100 fly over 2012 Olympic champion Dana Vollmer, and provided key splits on Canadian free relays that both earned bronze.

While many might not have expected her to go as fast as she did in Rio, Oleksiak left plenty of bread crumbs on her path to success this Olympiad. She smashed world junior records left and right in the sprint freestyle and butterfly races, and ended the year with multiple Canadian records. This year, Oleksiak set national records in the 100 fly, 100 free, 400 free and medley relays, and 800 free relay in LCM. She racked up more at the FINA World Championships in Windsor, breaking marks in the 100 free and four out of the possible five relays.

Oleksiak is by far the most versatile and valuable junior in the world right now. Not only does she threaten the podium in more than one individual race, but she’s a consistent player on any relay. She can sprint, yet had, by far, the strongest Canadian split in the 800 free relay in Rio. Meanwhile, she’s Canada‘s #1 butterfly weapon, though she only swam fly on the 200 medley relay in Windsor.

The Canadian women have built a stable foundation over the last two years or so for their future, and Oleksiak has been at the heart of that movement. She had a substantial medal haul at the biggest meets of 2016, and was recently named Canada’s athlete of the year. As Canada continues to surge with growing international relevance, Oleksiak will be leading the movement as she focuses next on the 2017 World Championships.

No doubt at all. I’m looking forward to her continued development and success. During the next two Olympics, she’ll be 20 (approximately the age of Simone Manuel now, Pellegrini in 2008, and Jodie Henry in 2004), and 24 (approximate ages of Sarah Sjöström, Vollmer, Steffen, Trickett in their gold medal-winning races).

Pretty clear winner for this one. Oleksiak and Ikee have very similar event profiles, which is actually pretty interesting when you look at the junior men’s side of things with Chalmers and Scott (who also swim pretty much the same things).