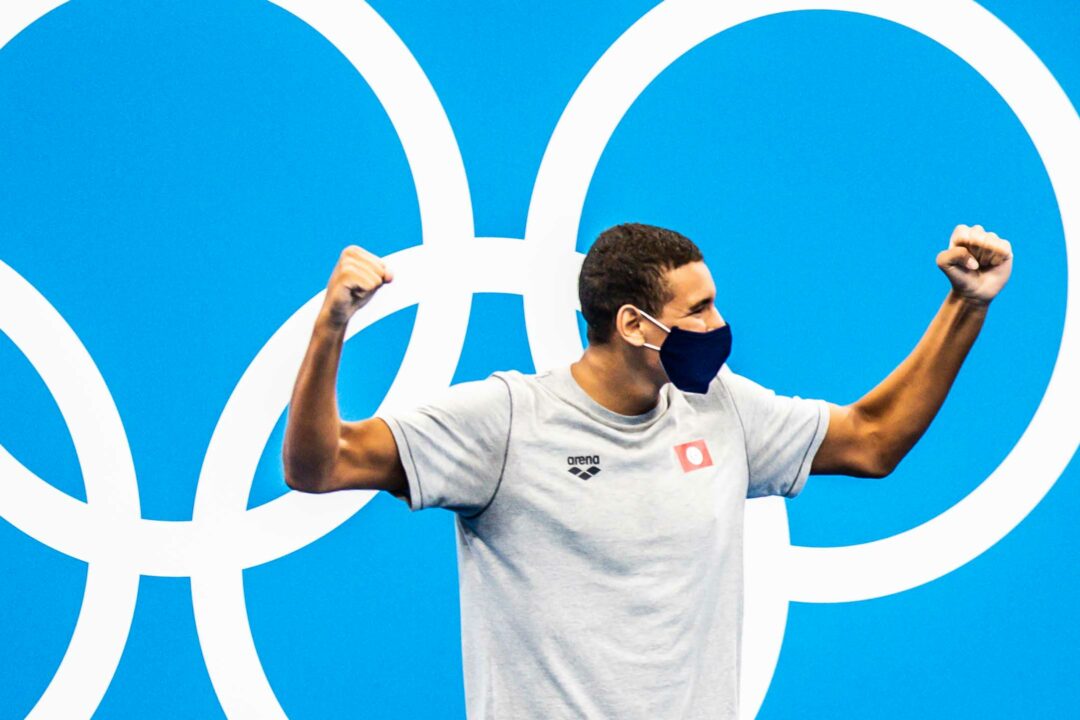 The man behind one of the most talked-about swims of the year; Ahmed Hafnaoui soared to Olympic gold this year in the 400 freestyle. Archive photo via Jack Spitser/Spitser Photography

Hafnaoui’s first 400 freestyle in 2021 was in May when he posted a 3:47.79 and he was slightly faster the next month with a 3:46.16. That time gave him a 16th-place entry in the event for the Tokyo Games, which would be his debut Olympics for Tunisia.

16th place is a solid position for most events at the Olympics, but the 400 freestyle features only a prelim and a final. That means that you need a top 8 finish right off the bat in order to vie for a spot on the podium. Hafnaoui did just that in the heats and just barely got himself into the final with a 3:45.68. The swim was only 0.14 seconds quicker than the 9th place finisher Antonio Djakovic of Switzerland who posted a 3:45.68.

Had Hafnaoui gone just 0.15 seconds slower than he did in the finals, the historic moment that made headlines would have never happened. Hafnaoui of course went on to place first in the Olympic final from lane 8, shaving more than two seconds off his PB with a 3:43.36. It was a spectacular victory over the likes of Jack McLoughlin from Australia (3:43.52) and Kieran Smith of the USA (3:43.94).

Ahmed Hafnaoui‘s Olympic gold medal swim, which almost never occurred, was one of the swims of the meet and of the year and makes him the standout favorite for this award. Hafnaoui’s only other swim at the Games was the men’s 800 freestyle where he placed 10th overall with a 7:49.14.

After a relatively quiet fall, Hafnaoui returned to the world stage in December to compete in the 2021 World Short Course Swimming Championships. The situation that almost precluded him from the final in Tokyo kept him out of the final at Short Course Worlds. He placed 10th overall in the 400 with a 3:40.30, which was 0.57 seconds slower than 8th place Marco de Tulio of Italy.

Despite missing out on the short course 400 final, Hafnaoui managed to get into the 1500 freestyle final with a 14:25.77. Heading into the final as second seed meant he would be joining the European trio of Mykhailo Romanchuk, Florian Wellbrock, and Gregorio Paltrinieri in the top 4. After the four of them battled it out over the first few laps, Hafnaoui, Wellbrock, and Romanchuk broke off to lead the field.

Ahmed Hafnaoui looks like one of the shining stars of the future of distance freestyle and a changeup of his training base in the upcoming year will create a potential for a new level of speed. In 2022 Hafanoui will be making the trip to Bloomington to race for Indiana University collegiately, leaving us with much excitement about how he fares in the short course yards pool.

I can’t wait for him to become the champion of the world championship next year….
I don’t know the future yet, but I’m expecting him to get a 400m freestyle and a solid position

I think he’ll do something special in the 800 at world champs next year, he’s got the speed (400 olympic champ) and the endurance (just won 1500 World Short course Silver), all the ingredients to be a world champ in the 800 imo.

Tatjana was a good story but his is the stuff of literal movies.