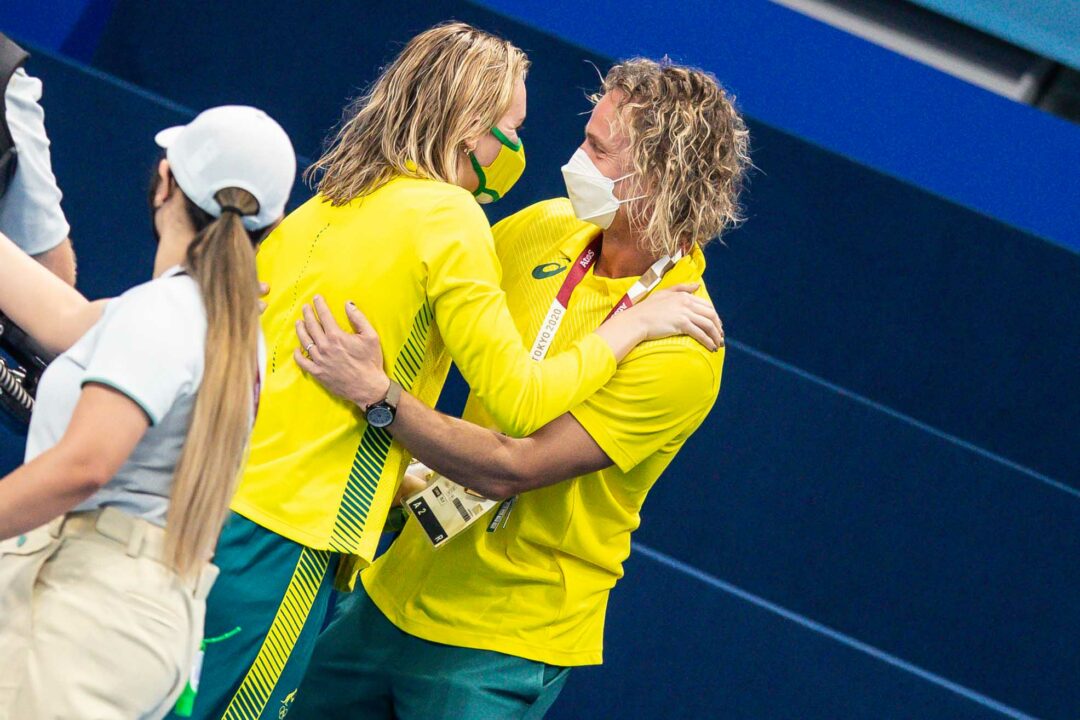 Dean Boxall, who guided his star pupil Ariarne Titmus to a pair of individual golds in Tokyo, is our Oceania Coach of the Year. Current photo via Jack Spitser/Spitser Photography

For the third time in his career, St. Peter’s Western coach Dean Boxall takes home the Swammy Award for Oceania Coach of the Year. Best known for his work with freestyle superstar Ariarne Titmus, Boxall won the award in 2018 and 2019 as well.

It was Titmus’ historic performances at the Tokyo 2020 Olympic Games that gives Boxall the edge for this award. On the first night of the Games, Titmus went head to head with American Katie Ledecky in the 400 free and came from behind to win with the second fastest time in history, behind only Ledecky’s winning time from the 2016 Rio Games.

Titmus’ win also resulted in Boxall becoming an international sensation overnight, with video of his celebration going viral on the internet.

Titmus’ great meet didn’t stop there, though, as she also claimed gold in the 200 free, topping a loaded field that included Ledecky, Siobhan Haughey, Penny Oleksiak and Federica Pellegrini in a new Olympic Record of 1:53.50. Titmus also took silver in the 800 free behind Ledecky and led off Australia’s bronze medal winning 4×200 free relay with the relay’s fastest split of 1:54.51.

In addition to Titmus, several of Australia’s other top swimmers call St. Peters Western their home, including Elijah Winnington, who won a bronze medal as a prelim swimmer on Australia’s 4×200 free relay, and Mitch Larkin, who competed on Australia’s 4×100 medley relay in Tokyo.

Honorable Mention (in no particular order):

Boxall coached Titmus to victory over Ledecky in the 400 and 200 free. Mission accomplished.

The 400 free victory was perfect execution of pacing and strategy. Right when Katie slowed down, Titmus accelerated past her and then kicked like crazy the last 50.

No wonder Boxall went into gyrations after watching his swimmer deliver such a brilliant race.

Yeah, Seebohm’s last 50 of her 200 back was great swimming to get her on the podium.

Plus ZSC. It made the results even more exciting. Basically they didn’t slow in the last lap as much as the others.

I noticed the other day that Atherton’s club has changed to Bond so I guess she’s coached by Mooney now?

Hard to go past the first woman to win 7 medals at one Games…in any other year McKeown or Titmus would have one.

thats what I was thinking too, but at the same time, relays disproportionately favor sprinters and/or freestyles (and McKeon is both) so it seems somewhat unfair to put too much significance on total medal count

Does this mean the railing won oceanic swimmer of the year?

The last thing this guy needs is a bigger head than he already has.

He is quite modest actually. Not joking,

Comes across as humble in his interviews.

It’s like anyone else, as soon as they’re well known there’s a million opinions based on a photo or a quick snippet that really isn’t grounded in the truth. The media could make anyone look like a douche if they felt it would help drive clicks.

““So when we were there, Katie wasn’t there with a coach. So I followed Katie, when she got on the bus I sat behind her, stalking. I watched her on her warm-up and then sat right next to her, right next to team Australia was next to the United States at that stage, and how she did her video analysis, and then sat with my American friends to see what she ate for breakfast, lunch, and dinner. I just wanted to watch what this girl was doing. So I stalked her, in a very good way,” said Boxall.”

I don’t think you know what modest means.

He wasn’t stalking them for “lols/funsies/giggles” but to learn from them and you have to be pretty modest to tell everyone the great lengths you went to in order to learn from your adversaries.

waiting for your swimmer’s rival’s coaches to not be around, waiting the perfect chance to be next to said rival and watching her every move instead of waiting for the right time to approach and ask question like a normal person is weird af and not all modest.

Weird maybe but weird is not the opposite of modest. Conceited/boastful is.

you don’t have to get all nitpicky over a word, the point is that boxall isn’t this nice and humble guy that yall are saying he is

No one actually claimed that he’s nice so you’re arguing against a point no one made.

No mention of Vince Raleigh?

Bohl should have won IMO. But because he doesn’t steal the limelight not as ‘cool’?

Did the railing file a case with SafeSport?

The fact that he coached O’Callaghan, Larkin, and winnington was the deal breaker between him, bohl and Mooney I guess

And he coached Meg Harris too.

I know what you mean about OÇallaghan, but I saw in an interview where a swimmer described how incredibly hard it was to do a prelims swim at say 1000PM, get back to the village and get asleep by 0200AM, and then get up again at 0500AM for the morning finals. They made a covincing argument for fresh swimmers. So the fact OCallaghan did a 1:55 in prelims was no guarantee she would swim that in the final on 3 hours sleep.

It only seems convincing until you realise Australia was the only team not reusing swimmers from the prelims with both teams ranked ahead of Australia having two swimmers from prelims each.

Yes, that puts a hole in the theory….but I still found the logistics of evening heats/ morning finals an interesting point, I know I couldn’t perform on 3 hours sleep!

Last edited 1 year ago by torchbearer
4
0
Reply
Tyson
Reply to  Ledecky will go 3:55 in Paris

That was Boxall’s call believe it or not they’d always decided to go with 4 in prelims and 4 in finals and because relay swimmers had to be used if they were bought to the games there was no room for O’Callaghan in the final line up. Boxall admitted to this on Brett’s podcast and took blame for the choice.

Throssell and Cook weren’t relay only nor were they top 6 at trials so could’ve been left off the relay.

Dean Boxall gets minus points then because he was the one in charge of the relay lineups.