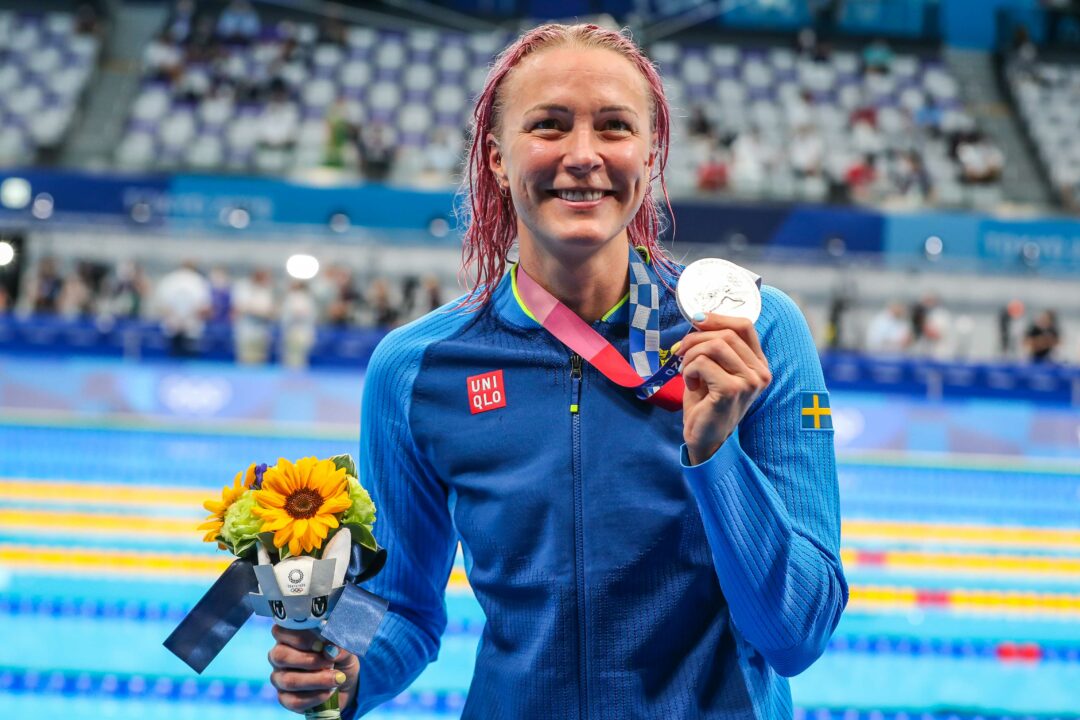 For the third time in her career and the first time since 2018, Sarah Sjostrom is the European Female Swimmer of the Year. Archive photo via Jack Spitser/Spitser Photography

2017 and 2018 recipient of this award Sarah Sjostrom had yet another standout year and is the recipient of the 2021 European Swimmer of the Year. Sjostrom got off to a rocky start in 2021 when she broke her elbow in early February. With only months to go until the Tokyo Olympics, the poorly timed break put her Olympic hopes into jeopardy.

She didn’t race for a few months after the injury, sitting out of the 2021 European Swimming Championships. She made her return to the pool, however, in order to make the trip to Tokyo. Sjostrom entered in three individual events in Tokyo; the 50 freestyle, 100 freestyle, and 100 butterfly. At the last edition of the Games 5 years earlier Sjostrom picked up three Olympic medals when she placed first in the 100 fly, second in the 200 freestyle and third in the 100 freestyle.

In Tokyo, Sjostrom was solid in all three prelims and placed 3rd, 4th, and 5th in the 100 fly, 50 free, and 100 free, respectively. She advanced to the semi-finals and seemed like she could be vying for a medal in all three events.

She qualified for the final in all 3 events as well, but ultimately only landed on 1 podium when she took silver to Emma McKeon‘s victory in the 50 freestyle. She just missed the 100 freestyle with a 52.68 for 5th and wound up in 7th place in the 100 fly. Sjostrom’s 3-final performance in Tokyo was a little short of what she did in Rio in 2016 but was still the strongest overall performance by any European woman at the meet.

Sjostrom continued to race in the fall of 2021 and returned for a third season with the International Swimming League’s Energy Standard. She was once again dominant in a wide variety of events and was a major player towards her team’s ultimate season win. Sjostrom won the 50 freestyle 7 times, the 50 butterfly 7 times, the 100 butterfly once, the 100 IM twice, and the 50-meter skins race three times throughout the season.

She won the MVP title at Match 1, Play-off 3, and during the final match of the season. Additionally, she finished the season as the highest-ranked swimmer in MVP points with 511.5. She became the first ISL athlete to clear 1,000 MVP points in her career. Sjostrom was the highest earner during the ISL season, raking in an estimated $269,125.

Curious what people think would happen in a scored meet between the US v. Mainland Europe v. Asia v. The commonwealth. Probably depends on how many people you enter in each event. I think the US women and European men would win but very unsure of that. Like I said probably depends if you only go like 2 deep vs. 4 deep in each event. Us and Europe would thrive with more depth

If you take Britain out of Europe, then it might be Americans winning on the men’s side. I would love to see a North America v. Europe v. Combined team of Asia and Oceania. I think it will make it more even among teams.

I think the commonwealth teams will be much better than you’re imagining. On both sides. Canadian/Australian women. GBR/Australian men. At two deep I’m not sure the US wins that women’s competition. I think it would be interesting. I think commonwealth wouldn’t win men’s though.

Hard to bet against the commonwealth women here considering they won 8/14 golds and 16/42 individual medals in Tokyo. USA and Asia tied gold-wise with 3/14 and won 15/42 and 7/42 individual medals, respectively. McKeon/Titmus/McKeown/Schoenmaker/Masse/MacNeil is a dangerous group to put on the same team.

I mostly don’t think the US would win because I doubt they get Ledecky to race at a meet like this.

Men’s race I think would be between Europe and USA.

But imagine rylov peaty milak and miressi on a relay

oversight on my part.

anyway, actually pretty even between europe and the us. back/free are on par would probably give a similar advantage to each team. of course if peaty replaced kamminga it would be europe no contest

Commonwealth would challenge for the win with Peaty too.

Rather Duncan on free

Commonwealth dominate the womens side imo. Mens probably the US if GBR are part of the Commonwealth team instead of Europe.

weakest performance for the european women in a long time. probably related to hosszu and sjostrom doing most of the heavy lifting in the last decade. hosszu’s a middle distance swimmer and her 30s, and sjostrom was injured last year. no young europeans have broken out enough to have success at that level yet, although there are a few good prospects.
its also the only olympics other than 1956 where a european team didn’t win a women’s relay medal (the dutch were 4th in the 1976 freestyle relay so this still holds up if you exclude ddr)

still, very resilient for sjostrom to do seasons bests for all her events in tokyo, and win a 50 free silver after… Read more »

Was a really weak Olympics for the European women….or perhaps AUS and the US were just too strong……..

Feel sorry for quadrarella getting sick weeks before OG. She could have put a major fight and maybe an upset on 800/1500