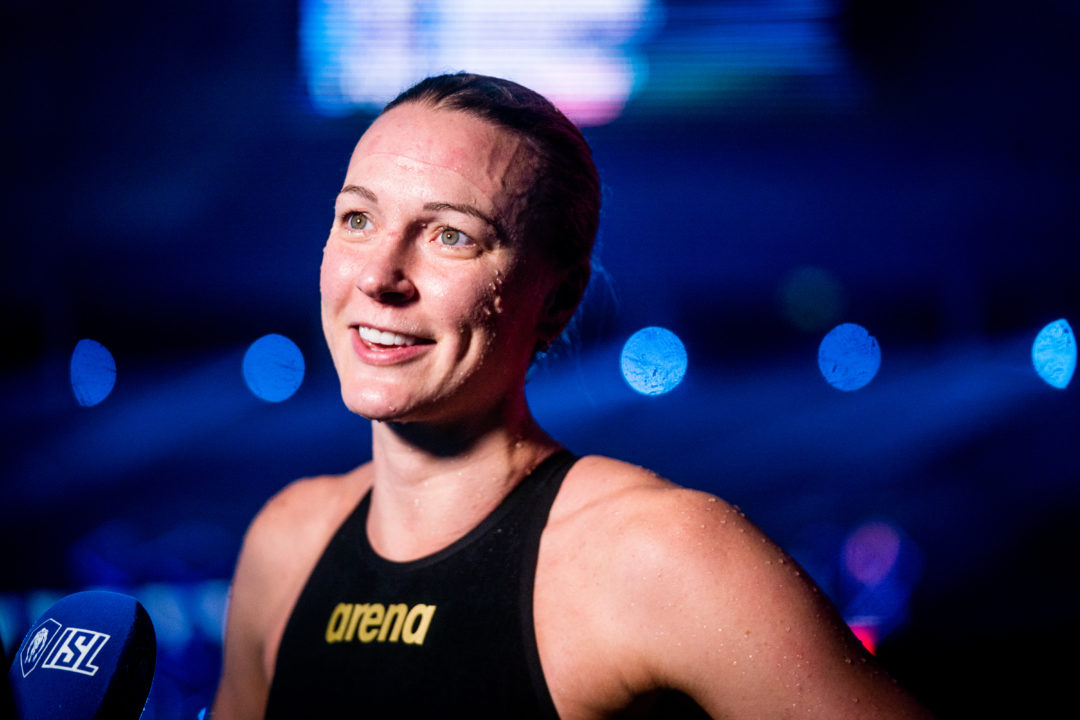 In total, the league awarded almost $6.9 million in prize money during the 2021 International Swimming League season, led by Sarah Sjostrom (above). Archive photo via Mine Kasapoglu for ISL

Sarah Sjostrom came away with $269,125 in prize money from the 2021 International Swimming League season, making her the top earner.

The $100,000 bonus that she received from being league MVP, plus the $20,000 bonus from being Finals MVP, made up almost half of Sjostrom’s prize money. MVP awards continue to be the best way for the league’s top swimmers to earn big money.

The top 3 earners all came from the league champion Energy Standard club.

This is due primarily to two factors. One is that there was simply more prize money available, an extra $850,000-or-so, which offset a dramatic reduction in “solidarity payments” (also known as athlete stipends or salaries).

The other is that, with so many of the league’s stars skipping all-or-part of the season, by choice, by illness, or by injury, there were more opportunity for the next tier of swimmers to earn more money. That means that swimmers like Robert Glinta, by virtue of showing up for all of Iron’s matches, was able to break the $50,000 barrier.

The top-earning rookie in 2021 was LA Current’s breakout backstroker Ingrid Wilm. After not swimming in the ISL last season, she earned $74,900. Not only is she a rookie, but she’s an undrafted rookie – LA Current head coach David Marsh says she was the last addition to the team in the post-draft free agency period. That’s a pretty good return on a last-pickup.

The highest-earning swimmer to not qualify for the Playoffs was Tokyo’s Daiya Seto of the Tokyo Frog Kings. He ranked 18th in the league with $63,975, in spite of only having 5 matches (as compared to 8 for the rest of the league, save the New York Breakers).

160 men versus 152 women earned prize money this season, but women earned slightly more money. Female athletes earned $3,486,100, while male athletes earned $3,382,800. That’s a gap of $103,300 in favor of the women. The likely explanation there is the way that the team prize money for team results is distributed. If a team only has 12 male swimmers at a meet, then only those 12 swimmers get the prize money based on their team’s finishes. Throughout the season, women’s rosters tended to be bigger than men’s at meets, so more “team finish” prize money was distributed to female athletes just by nature of their showing up.

In total, $6,868,900 in prize money was awarded during the ISL season. When that money will be paid remains to be seen – Adam Peaty recently revealed, publicly, that he still has not been paid in full for the 2020 season.

We examined last year’s money here coming into the season. The top-earning team this season, Energy Standard, earned almost the same amount as last year’s top-earning team, Cali Condors, did throughout the season – about $43,000 less. The bottom end of that ranking, the New York Breakers, has come up by about the same amount as the top end dropped, though that’s a much bigger percentage (about a third) for the bottom end.

So, the wealth-gap is getting better. Without knowing how recruitment works or will work next year, it’s hard to know if that will provide more motivation for swimmers to stick with bad teams, though the good teams have still made out way better.

What is it with the stories that they have yet to receive? Did they get paid? Current and past due money?

one swimmer earning more than an entire club , yeah, ISL

How many swimmers are still waiting to get paid from last season? If Peaty isn’t fully paid yet, what is the situation of the less known swimmers?? what a joke!!

After yesterday’s scandal and If Dressel and King decide to quit, then Konstantin’s league will fall apart.

The league was never going to be sustainable. There’s a host of sad reasons for that. Not least of them is that there has never been any more or less sound business idea. It’s still a charity toy project that the delusional owner can’t really afford anymore because of his dwindling fortune, but he can’t bring himself to face up to it either. Heading for a disaster.

I was really rooting for Nic Fink. Congrats to Sarah nonetheless

I’m rooting for the athletes being paid.