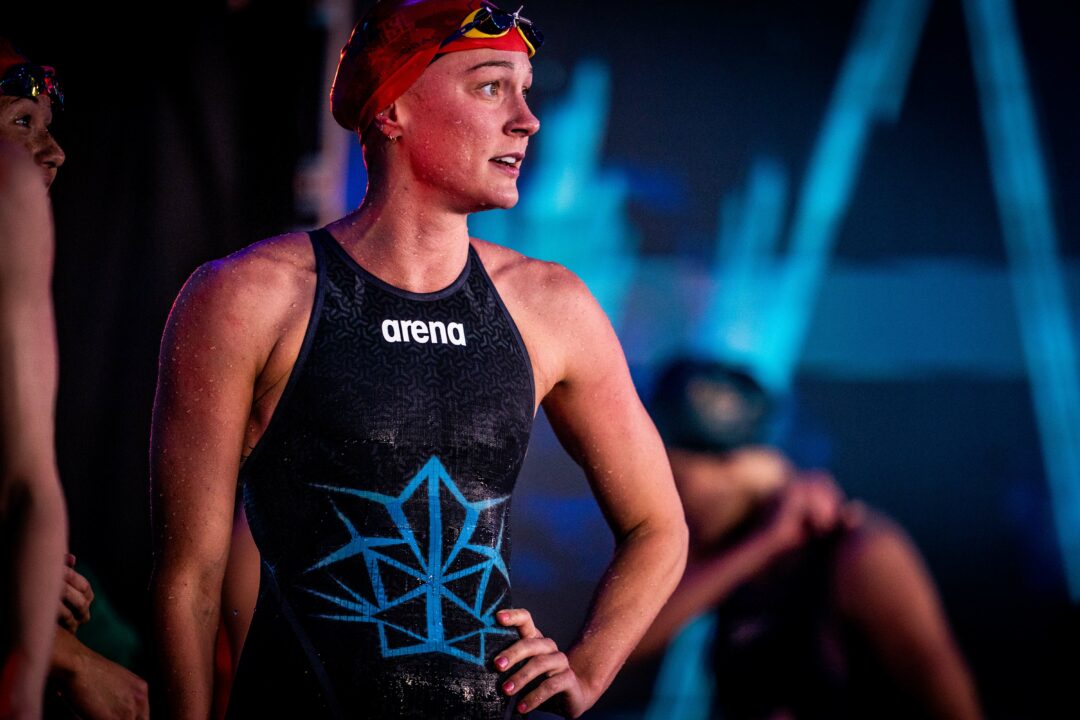 Sarah Sjostrom is the International Swimming League MVP for the 2nd time in 3 seasons, and this year doubled up as the Finals MVP. Archive photo via Mine Kasapoglu/ISL

This marks the 2nd-straight season where the Finals MVP and season MVP were the same swimmer: last year, Cali’s Caeleb Dressel pulled the double. In season 1, Dressel was Finals MVP, and Sjostrom was season MVP.

Not much changed dramatically in the season-long MVP top 10 at the end of the road. In fact, the top 7 from the MVP standings coming into the meet were the same as the top 7 coming out of the meet.

There was some movement at the bottom of the money: Ranomi Kromowidjojo, whose Iron team didn’t advance to the final, fell out of the top 10. She did race in the “Death Match” at the end of the regular season, so ultimately got the same number of matches as the rest of the swimmers in the top 18, though weaker relays still hurts athletes on weaker teams.

Tom Shields hung on to the 10th spot – his empty lane in the final match in the 200 fly doesn’t actually count against him, he just gets 0 points, otherwise his teammate Wilm would have beaten him by three-quarters of a point.

Wilm finishing 11th in MVP scoring is easily the biggest surprise of the ISL season. Wilm was virtually-unknown internationally before the ISL season, but starting with an early Canadian Record, she turned into one of the true stars, surprise or not, of the 2021 season.

Only one award is given for finals MVP, and that too went to Sarah Sjostrom.

Nic Fink, after another 19-point Jackpot performance in the 100 breaststroke on Sautrday, looked in position to win the $20,000 prize for Finals MVP. Energy Standard loaded Sarah Sjostrom up with four races on the final day, though, and grabbed wins in the 100 IM and 400 medley relay, and 2nd-place finishes in the 50 fly and 100 free.

And so it was her quantity, swimming 8 races, over Fink’s quality, swimming 5 races but getting more Jackpots, that made the difference.

Of note, Fink would have won MVP if the infamous Cali Condors women’s medley relay hadn’t been disqualified. That DQ moved Sjostrom’s Energy Standard relay into first place and earned her 4 more points. The gap between the two was only 1.5 points.

Maybe they do not appear because they have not been paid?

I think Dressels points we’re added incorrectly for the 2 days! Unless I am missing how it’s done, with 34 skin points, he should be over 60 points!??

Skins points only count half for MVP scoring.

This DQ will be the talking point no matter what….It affected soo much things in the end it is crazy!!!…..Fink really swam out of his mind in this Final…..

Sarah s do the right thing
maybe you dont give the money to fink
but you know if no Bogus DQ ,,,you dont win the 20k
MVP…
donate to charity or swim foundation

I would suggest she’s been doing it for years and not questioned!

Big fan of hers, not her fault, but Hard to see Fink not get it directly due to a false dq

Not her fault!
Swimmers are taught not to do this. Her face suggested she was caught this time!
She’s an Olympic swimmer she should know

Well done Sarah! Always a pleasure to watch her swim

Well deserved victory for Sjostrom. What a joy to see her swimming.