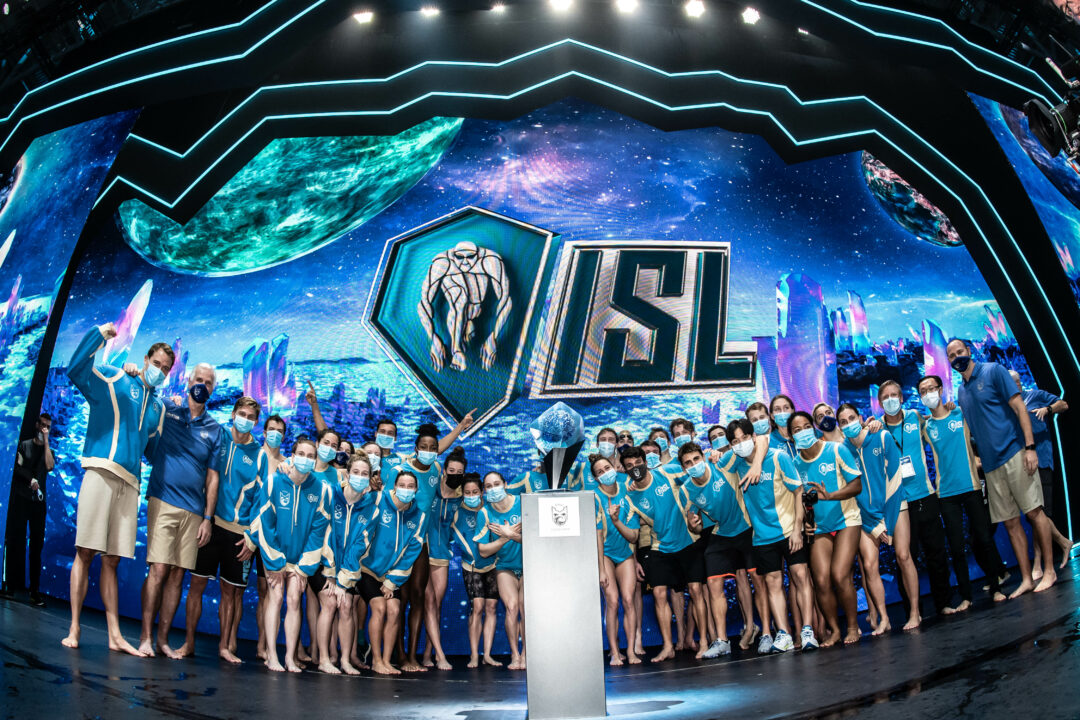 This week, the International Swimming League moves into the second phase of its recruiting cycle, a 30-day free agency period.

With teams having between 20 and 27 swimmers on their rosters after a period of retaining top swimmers and drafting more, this free agency period will likely only make incremental changes in teams’ fortune for the next season.

While the draft made overtures of trying to seek ‘parity,’ the league is still set up in essentially a European model where there are ‘wealthy’ clubs, ‘poor’ clubs, and a huge gap in between them. As a demonstration of this, in the 2020 season, the top team in the ISL, the Cali Condors, distributed more than $1.4 million dollars to its athletes. That’s as compared to the last team in the league, the Aquacenturions, who distributed only $158,600 to its athletes in prize money. That’s a gap of almost 10-times the payout – and not because the Condors are pulling in tons of revenue due to their popularity, but because they were simply the better team. At present, all money is paid to athletes via the league.

These numbers exclude the solidarity payments. All athletes were given the same solidarity payment, though to varying degrees in the first three seasons, certain stars have been given extra ‘ambassador’ money by the league to encourage their participation (which, again, heavily favors the top teams, which have most of the big stars).

The origins of the dominance of the top teams is through not fault of their own. Prior to the full expansion of the league, there was an annual four-team meet of a similar format. The four teams that lead the league are borne out of that four team format – meaning that in the first open recruitment period, they already had relationships built, teams built, and groups of athletes who wanted to be on teams together because they were friends or college teammates.

There are a few ways to further close these gaps, all with different strengths and weaknesses. One would be a total blowup of team rosters – something that thus far, the league has not been willing to do. That might look something like only allowing teams to retain 5 athletes, and then re-drafting.

Another option would be to change athletes’ incentives. While uniform salaries paints a picture of solidarity (and makes recruitment less of a headache), allowing athletes to negotiate for higher salaries could convince a star to go swim for a weaker team.

In European leagues, notably the English Premier League in soccer, there are some limitations on teams’ spending. But, generally, there’s not much effort to force the richest teams like Manchester United and Liverpool and Manchester City into a level playing field.

We see this in American sports in baseball to some extent. Though there are still more controls there via luxury taxes, the richest teams can buy the best players. The NFL salary cap is the tightest in terms of forcing parity, while the NHL and NBA fall somewhere in the middle. This is a little bit of a different mechanism, because it’s a matter of salaries rather than the ISL’s financial bonus reward system, but the outcome is ultimately the same.

Even in those European leagues, though, there is an ability for a team through deft coaching and a golden generation of youth to make a burst into the top of the table. As the ISL exists now, that’s not really possible, given the lack of long-term contracts and the short season to do any major athlete development.

The ultimate hurdle is the fear that many of the athletes don’t want to be told where to swim. This is talked about behind closed doors, but not publicly. The concern that if athletes don’t get to pair with their training partners, romantic partners, or coaches, that they might opt out of the league all together. I don’t think that fear by league runners is unjustified, but it is something that needs to be conquered for the league to succeed. There just aren’t enough ‘lucky bounces’ or ‘brilliant tactics’ or ‘hot streaks’ for the league to ever become competitive otherwise. On their best day last season, Aqua wasn’t going to come within 200 points of the Cali Condors on Cali’s worst day.

So here’s to hoping that the league continues to work on closing this gap, so that the excitement of the show that ISL puts on carries over into more excitement on the scoreboards. And let’s hope they get it figured out before the honeypot runs dry.

After reading this article earlier I thought the draft wouldn’t really change anything with this disparity between top and lower clubs payments or position to much but then it just sort of hit me while looking through some other things as theres more races this year.

Wouldn’t the difference in money get worse this year assuming they still pay extra money for advancing to different stages and give money to the race winners and mvps for each race?

I wonder this because last year 9th/10th raced 4 season meets, while 5th-8th had 1 extra semi meet and finalists a 2nd meet extra compared to 9/10th. Where as I believe it’s 4 season meets, 3 play off meets and then the… Read more »

How did the good/bad teams situation happen in the first place, though? How did it work out that Aqua and the NYB (and DC to a lesser extent) ended up with lower ranked athletes, non-Olympians, etc.? Did coaches just do a lot of strategic private recruiting to stack the Condors, Roar, and Energy?

The answer to your question is laid out above.

The 4 good teams were the original 4 teams lined up to compete in the once a year ISL format, but not league, event. So most of the top swimmers were committed to one of those four teams, and were not given any incentive to change.

Would swimming off events be fun? The sprint br swim 2fly. The distance freestyler swim 100im (if they don’t have 100im they could add it). Someone like Dressel would still be great. When the coach knows which off event the swimmers are doing, then it might help the coaching matter? The meets might be a bit more unpredictable. Or maybe they did this already? I think it might be interesting.

This draft was a big step in the right direction. Allowing the top teams to protect fewer swimmers would have evened out the field a bit more, but I’m sure there was some pushback from the owners and it risks having some swimmers quitting altogether if they can’t stay with the same coaches/team. Eventually the top teams will lose talent due to retirement, and the lower teams will grab the high end NCAA grad type of talents via the draft, and we will see great parity. Perhaps they should allow trades and a trade deadline?

The rules are being tweaked too, don’t forget. Last year was a flaw in that the Condors needed to simply win the women’s relay and… Read more »

It is definitely more entertaining than the usual.

But the problem is – that’s not good enough. The amount of money this league needs to make to sustain once Konstantin Grigorishin can’t or won’t fund the entire thing anymore is huge. So “better than what we have” isn’t good enough for it to continue to exist.

Pray for a long line of billionaires

Is Konstantin looking for outside money? I thought I heard that he isn’t doing that so he can maintain 100% control.

Could be totally wrong though.

While I disagree with many of his decisions in running the league, KG is a smart guy.

I’m sure he’d love to keep control. But also, a billion dollars in net worth only goes so far at $50-$75 million/season. So yes, I think he’s looking for outside money.

The league leaves easy money on the table that would double as advertising. Silly.

For sure. Merch could help close the gap. But wowee does it take a lot of t-shirts to make $50 million.

Agree, trying to think of a pro sports league that follows a revenue sharing model within a team?

You would lose that bet handily.

I think a great storyline (that the ISL needs) is one of these lower-tier teams upsetting a higher-tier team and placing into the finals… everyone loves an underdog. At least right now, I think it’s unlikely but time will tell.

Yeah that would be AMAZING for the model. That would be the best thing that could happen.

FIS and IBU (the skiing and biathlon federations) organise season long world cups in primarily individual sports ( there’s also relays and team events), These competitions are highly esteemed and successful. ISL and its flashing effects, strobe lights short course nonsense is to be blamed on FINA’s inability to organise an engaging attractive world cup series or league or whatever you’d call it…

A bunch of Norwegian asthmatics battling their affliction across the snow fields .Everyone is simply amazed people who cannot breathe standing still can do this stuff. Some even stop & shoot stuff & off again .
I admit I do watch it because its very cooling mentally when its 40′.C here . I like to watch the original Titanic too . Very refreshing .

I have not seen any ISL yet . I might if it was outdoors in the snow like ice swimming . I also love the Orthodox Ephiphany clips !