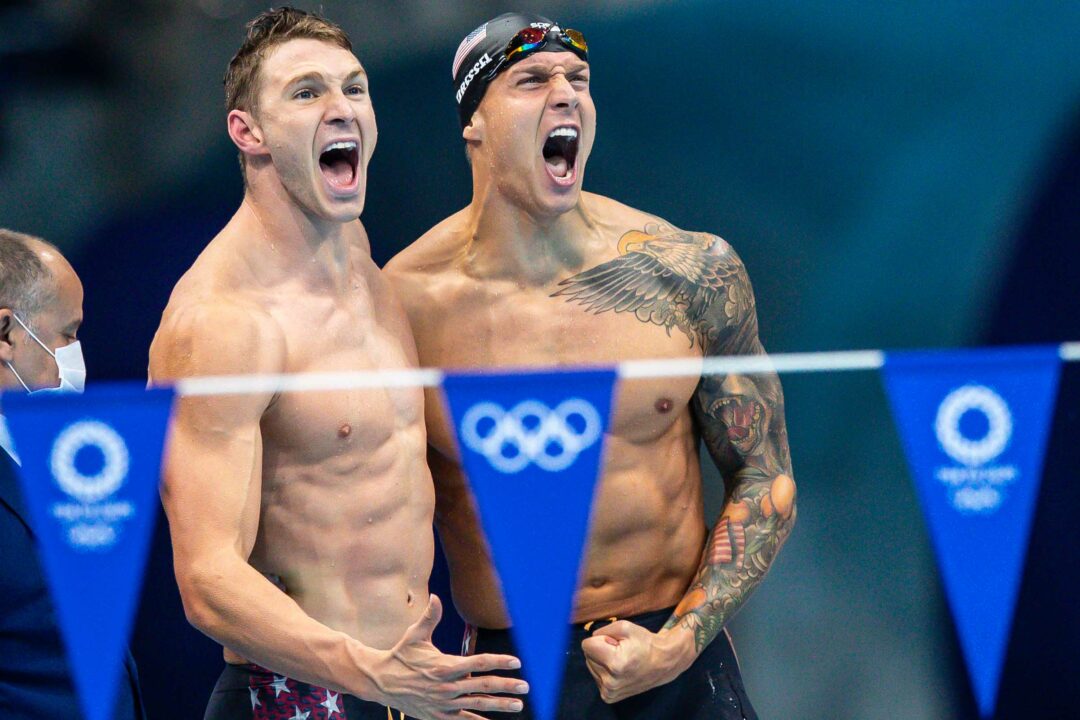 Olympians Ryan Murphy (left) and Caeleb Dressel (right) were among the 51 women and 63 men that will make up the 2021-22 National Team roster. Archive photo via Jack Spitser/Spitser Photography

Nathan Adrian and Matt Grevers have each earned 14 National Team Selections, while Allison Schmitt has now been named to the National Team 12 times. Some of the first-time members include Lydia Jacoby, Hunter Armstrong, Bowe Becker, Brooks Curry, and Katie Grimes.

Selection to the National Team was based on the athletes’ performances from January 1, 2021 through August 31, 2021. In some cases, the athletes are no longer swimming. Madisyn Cox, for example, is now attending medical school. In other cases, athletes who represented Team USA at the Olympic Games Tokyo 2020 did not make the National Team (e.g., Brooke Forde and Catie DeLoof).

Sandpipers of Nevada put five athletes on the team, making it the most-represented, non-collegiate club on the roster. The University of Texas and Cal tied for the honors of universities with the most athletes name to the roster, with 11 current, former and incoming athletes from each school.

U.S. National Team Members enjoy several key benefits, including access to monthly stipends, meet reimbursement, athlete health insurance, and Olympic Training Center access, among others. You can read more about those benefits here. Athletes named to the 2021-2022 National Team will be members of the team from September 10, 2021-September 8, 2022.

The selection criteria for the 2021-22 National Team were as follows:

Note that being a member of the Olympic Team doesn’t guarantee an athlete a spot on the National Team roster. At least two Tokyo 2020 Olympians, Brooke Forde and Catie DeLoof, did not qualify for the National Team.

The full roster is listed below. Click here to view the official women’s roster by event; click here for men.

who were selected after they swam the 10K at the Olympic Games Tokyo 2020. The roster will also feature the top-five finishers in the 10K at the Las Vegas Open Water Championships Cup, which takes place October 8-10, 2021.

National Team athlete bios can be found at https://www.usaswimming.org/meet-the-team.

Whoa I just realized Cody didn’t make the team for the first time in… eons, right? Doesn’t that mean he loses his health insurance? Yikes. Especially with his wife expecting another baby.

Can’t be saying casas is still at a&m

36-year-old Grevers still on the National Team. Coleman Stewart makes the 100 fly. MA with the “N/A” for college, but most events on the men’s side (though there should be a significant deduction for his last 50 of the 200 IM). Seems weird that as overall dominant as Dressel is, he makes it in “only” 3 events. Wonder what Ledecky could do in the 10K.

the fact that he has ‘07 next to northwestern made me go 😳 bc there’s some swimmers on the national team that were like little kids/practically babies when he graduated. really makes you go huh

My boy MA is the only male to qualify in 4 events!

Do they name coaches? Would like to see who coaches who. Not necessarily implied by their team

When do they announce the Junior team?