2019 Swammy Awards: US Male Swimmer of the Year Caeleb Dressel

After a rocky 2018 Pan Pacs, Caeleb Dressel rose to the top again at the 2019 FINA World Championships. Dressel set his first individual World Record in 2019. 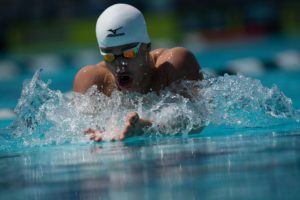 Andrew Wilson of Athens Bulldog Swim Club broke the U.S. Open meet record in the 100 breast in prelims with 59.28. 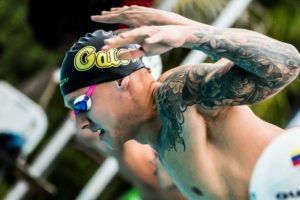 World record holder Caeleb Dressel is slated to swim both the 100 fly and the 200 free during prelims of Day 3 of the 2019 US Open Championships. 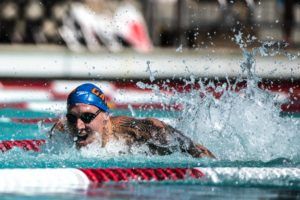 All four American ISL teams are meeting this weekend in College Park, with the top two heading to Las Vegas next month for the ISL Championship.

Jay Litherland
Jay Litherland is a versatile swimmer originally from Alpharetta, Ga. Litherland has been a member of USA Swimming’s National Team as well as the National Junior Team. He’s currently in his Junior season at the University of Georgia where he’s majoring in Business. He’s one of three Litherland swimmers on the Georgia team, as Jay, Mick and Kevin are triplets. Litherland has triple citizenship in the U.S., Japan and New Zealand – he can also speak Japanese. He started swimming at the age of 8, and he says that swimming was the only sport he was good at, although recently as a college student he also enjoys skateboarding in his down time. 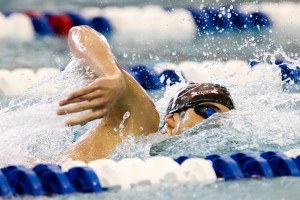 He’s primarily an IM swimmer, was named to the National Junior Team for his performance in the 200 IM and even got his first NCAA ‘A’ cut in the 400 IM in his first season as a Bulldog. Born Aug. 24, 1995 to parents, Andrew and Chizuko Litherland, he attended Chattahoochee High School, and he swam for Dynamo Swim Club coached by Franz Resseguie. He also was a high school All-American.

As a freshman Litherland competed at the Georgia Invite where he went best times in many of his events. He also swam at the SEC Championships – he finished seventh in the 400 IM, 10th in the 200 backstroke, and 13th in the 500 freestyle.

Litherland made huge improvements in his second year at Georgia. At the NCAA Championships he won bronze in the 400 meter medley and came 14th in the 200 meter backstroke. On the 800 meter freestyle relay, Litherland helped Georgia to finish 5th. 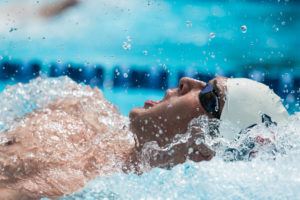 Jay once again performed well on the biggest collegiate stage his junior year. Swimming to a best time of 4:14 in the 500 free on the second day of the 2017 NCAA Championships, Jay just missed making it back getting 18th place in prelims. In the 400 IM, he followed up his mid-season performance of 3:38.18 with a prelims swim of 3:38.39 to secure 2nd place headed into finals. Although Litherland only added .27 from his morning swim, he slipped to 7th place in finals. After swimming to 13th place in prelims of the 200 back on the final day of the meet, Jay dropped a personal best of 1:40.03 at night to move up to 10th place.

International Competition
Litherland competed at the 2014 Junior World Championships in Dubai as well as the 2013 World Cup in Asia. He was also a 2012 U.S. Olympic Trials qualifier finishing 53rd in the 400m IM and 36th in the 200m backstroke.

Litherland won gold in the 400 meter medley ahead of his USA teammate, Josh Prenot in 4:12.43. 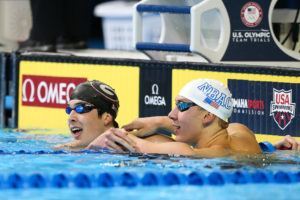 In the first event of the 2016 Trials Litherland finished 2nd in the 400 meter medley behind his Georgia teammate, Chase Kalisz, to punch his ticket to the Rio Olympics. At the 300 mark Litherland was two seconds behind Ryan Lochte in 2nd but he powered through the freestyle leg with a 57.38 split to take the silver in 4:11.02. That time moved him up to fourth in the world so far this year.

In his Olympic debut Litherland joined his USA teammate, Chase Kalisz, in the 400 meter medley final on the opening night in the pool. With the medals accounted for, it was a close battle for fourth, fifth and sixth in the final stages of the gruelling event. On the last 50 meters, Litherland managed to overtake Australia’s Thomas Fraser-Holmes but didn’t have enough left to take down Great Britain’s Max Litchfield. Litherland finished fifth in 4:11.68. His compatriot took silver in 4:06.75.

Litherland qualified for his first senior World Championships with a silver medal in the 400 meter medley in a new best time of 4:09.31. Just like at the Olympic Trials, he finished behind Kalisz. 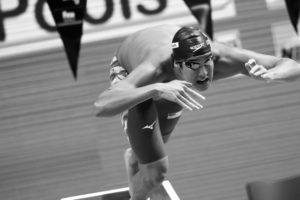 In Budapest Litherland swam in the heats on the 4×200 meter freestyle relay posting a split on 1:47.48 to help qualify Team USA through to the final in 7th position. Blake Pieroni, Townley Haas, Jack Conger and Zane Grothe combined in the final to finish third. Litherland picked up a bronze medal for his efforts in the heats.

On June 11, 2019, Jay Litherland was announced as a member of the DC Trident ISL team, headed by GM Kaitlin Sandeno.

In his only event of the week, Litherland won his first individual world champs medal in the 400 IM. Litherland nearly ran down heavy favorite Daiya Seto in the last 100, touching just .27 behind him in a time of 4:09.22.