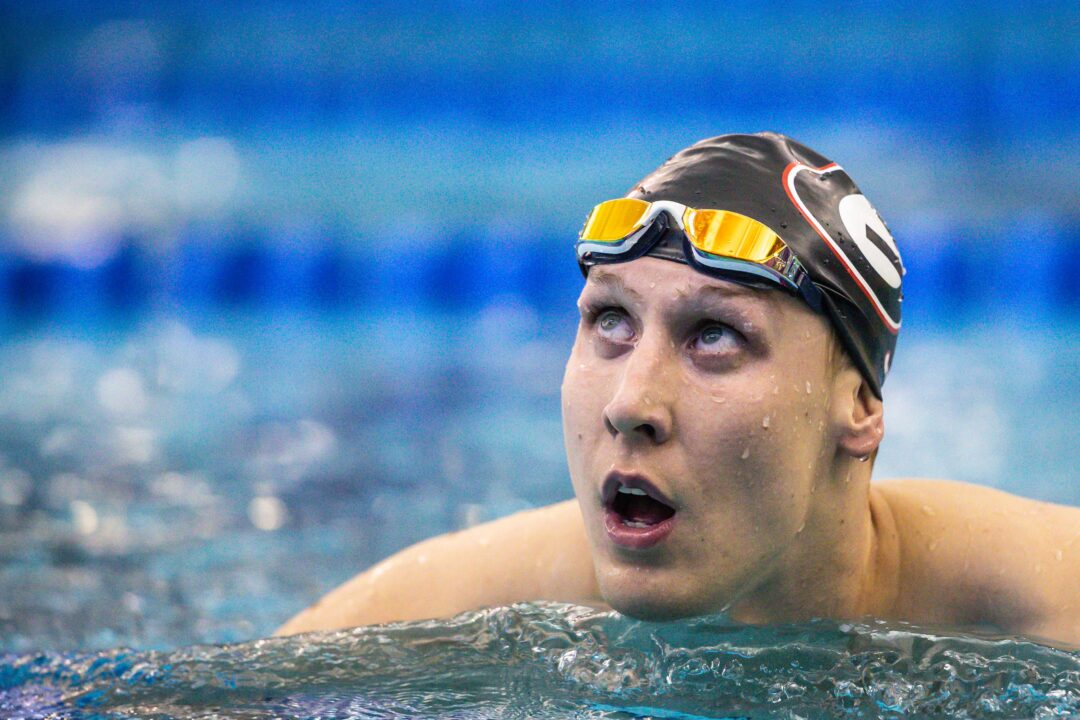 Kalisz's move means he will reunite at Arizona State with Bob Bowman, who was his age group coach at the North Baltimore Aquatic Club. Archive photo via Jack Spitser/Spitser Photography

Did you think Regan Smith moving to Arizona State was enough big swim news for today? Well, you thought wrong. Because Tokyo Olympic gold medalist Chase Kalisz just announced on Instagram that he would be leaving his alma mater of Georgia to swim at ASU with his former age group coach, Bob Bowman.

After 10 years it’s finally time to say goodbye to Athens. Thank you to @jack.bauerle & @ugaswimdive for all the incredible memories and experiences!
Excited to be getting back to the old age group coach 😉 Time to get to work! 💪🌵☀️

Kalisz trained at Georgia under head coach Jack Bauerle from 2012, his freshman year of college, up until now. He made the 2016 and 2020 Olympic team in his time at UGA, winning 400 IM silver in Rio and gold in Tokyo. He also earned seven World Championship medals, which he accumulated from swimming at the 2013, 2015, 2017, 2019, and 2022 World Championships. In June 2022, Bauerle announced his retirement from coaching after dedicating 46 years to the sport.

During his age group career, Kalisz swam for the North Baltimore Aquatic Club where Bowman coached from 1996 to 2005. Kalisz will now reunite with Bowman at ASU, where he also coaches reigning 200 and 400 IM world champion Leon Marchand and 400 IM Olympic bronze medalist Hali Flickinger. ASU now has 2/3rd of the men’s 400 IM podium from this year’s World Championships, as gold medalist Marchand and bronze medalist Kalisz both train there now.

At 28 years old, there was speculation that Kalisz could be approaching retirement. However, his decision to change training bases seems to indicate that he is still plaining on training towards at least the 2024 Paris Olympics. He recently swam his fastest 400 IM time (4:07.47) since 2017 at Worlds, so that was probably a push for him to keep swimming as well.

Jay Litherland, who took 400 IM silver at the Olympics and trained at Georgia alongside Kalisz, also recently announced a move to ASU.

That could rival the Olympics live results posts for number of comments.

Wonder if UGA swimming/diving without Jack Bauerle will crash and burn like gymnastics has there since Suzanne Yoculan left?

why, pro swimmers are different and gymnastics also very different from swimming….

Y NOT GO TO IRONLADY OLD COACH AND BE EVEN FASTER?

Gorra push Leon to that WR

Gotta keep up with Leon somehow…..

This change of scenery is going to be a really good thing for Chase – could be just what he needs to stay right in the mix along with MA, Shane & Carson for one of the two slots in Paris in the 2IM.
Along with women’s 100 back, this event is shaping up to be two of the more loaded, intriguing events leading up to ‘24.

So that’s now Reagan, Chase, and Jay now all with Bowman

Marchand too….Ik he isn’t American. But that is an insane group

Its amazing that Bowman is continually coaching so many high-caliber pupils after Phelps.