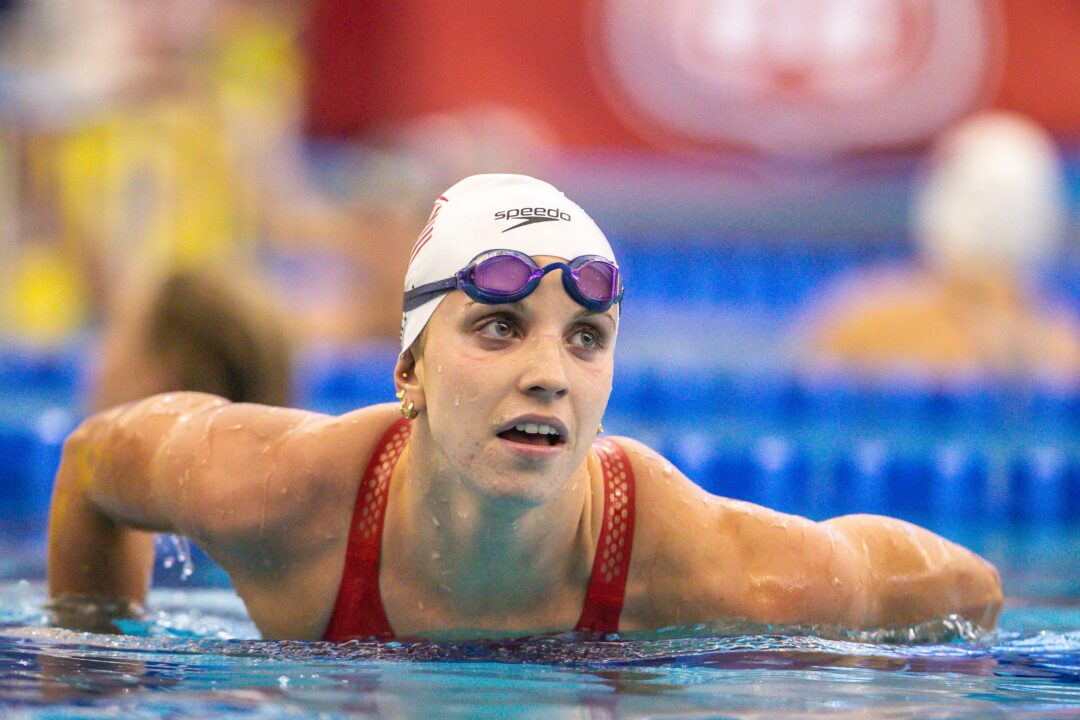 Smith is leaving the Cardinal after racing just one season in the NCAA, having won the national title last year in the women's 200 backstroke. Archive photo via Jack Spitser/Spitser Photography

In a surprising turn of events that will alter the course of the collegiate swimming landscape this season, three-time Olympic medalist and current world record holder Regan Smith has announced she is leaving Stanford University and will turn professional.

Smith, who is coming off winning two gold medals at the 2022 World Championships in Budapest, will move to Tempe, Ariz., to train with the pro group under Bob Bowman at Arizona State University.

In a statement, the 20-year-old said that she believes Bowman will lead her to where she needs to be for the 2024 Olympic Games in Paris.

“After a tremendous amount of reflection and soul-searching, I have chosen to pursue my competitive swimming goals as a professional athlete,” Smith said.

“After spending a substantial part of the last two years on my mental game, it’s time to focus on increasing my training intensity. I’m entirely confident that Bob’s leadership and training will have me exactly where I want to be for Paris 2024.

“I believe that, in the long run, this is the best way for me to continue to develop as an athlete.”

The move comes after Smith has only raced one NCAA season with the Cardinal, having deferred her freshman year in 2020-21 to prepare for the Olympic Games.

During the 2021-22 collegiate season, Smith was the NCAA champion in the women’s 200 backstroke and placed second in the 200 butterfly and third in the 100 back at the national championships.

A native of Lakeville, Minn., Smith says she will delay her collegiate studies to try and take full advantage of the next few years in the pool.

“At this time, I am postponing my college degree to maximize my athletic competitive window and could not be more excited for this journey,” she said. “I want to thank Greg Meehan and Tracy Slusser, the Stanford staff and my Stanford teammates for their unwavering support and I wish them continued success.”

Bowman, who currently trains Hali Flickinger, who Smith has frequently raced head-to-head both domestically and internationally in the 200 fly in recent years, is excited to add such a talented swimmer to his pro group.

“Regan is a special athlete, and I look forward to helping her work towards her goals in the coming years,” Bowman said. “She has a clear picture of where she wants to go and how to get there. Having tremendous respect for both Mike Parratto and Greg Meehan, I am honored to build on the strong foundation they have given Regan.”

Shortly after the news that Smith would be heading to Tempe dropped, we learned that Chase Kalisz and Jay Litherland were also moving to ASU and joining Bowman after training at the University of Georgia.

The two swimmers will be reunited with former UGA teammate Olivia Smoliga, who moved to ASU last year.

Smith forgoing her remaining three seasons of NCAA eligibility is a major blow for the Cardinal, as the team was climbing its way back into national title contention after falling to ninth at the 2021 championships.

Smith led Stanford with 53 individual points at the 2022 NCAA Championships, and along with super-senior Brooke Forde (44), freshman Torri Huske (43) and the return of Canadian Taylor Ruck (36), the team managed to jump up six spots and place third overall, just seven points shy of runner-up Texas.

Despite the loss of Forde, many believed the 2022-23 season was when the Cardinal would legitimately challenge the Virginia Cavaliers for the national title, particularly with the addition of superstar Claire Curzan, an incoming freshman.

Curzan has the ability to essentially fill Smith’s shoes from a points perspective for Stanford, but it’s certainly a blow for Greg Meehan and his staff to not have both in the mix moving forward.

Smith is not the first prominent female swimmer to turn pro early and forgo some remaining seasons of NCAA eligibility. Katie Ledecky did the same thing at Stanford in March 2018, as did Simone Manuel in the same year. Other recent examples include Cal’s Missy Franklin and Kathleen Baker.

Despite only spending one year on The Farm, Smith showed progress in the long course pool under Meehan.

This year she was faster in both the 100 and 200 backstroke compared to the 2021 Olympic year, though her fastest performance in the 200 fly came last year.

Her best times in the 100 and 200 back still stem from the breakout 2019 World Championship showing she had when she was training at her home club, Riptide Swim Team, under Mike Parratto.

Now turning her entire to focus to the long course pool, Smith will look to build off a successful World Championship showing in June where she won gold in the 100 back, placed fourth in the 200 fly and fifth in the 50 back individually. She also led off the victorious U.S. women’s 400 medley relay.

After her gold medal victory and world record-setting performance in the 200 back at the 2019 World Championships, Smith has had two consecutive third-place finishes at U.S. selection meets in the event and therefore failed to qualify to swim it on the international stage in each of the last two years.

Where is this “supposed” sprinter announcement?

**BREAKING NEWS**… Kevin Durant has just announced that he will be leaving the New Jersey Nets immediately to join Bob Bowman’s Pro group at Arizona State. Something about improving his starts…

I don’t know who needs to hear this but the Nets haven’t played in New Jersey in a decade.

Just listened to the breakdown and LOL when did Regan say she was mad that SwimSwam didn’t pick her to win gold in Tokyo? That’s hilarious.

It shows you that most swimmers are soft at the highest level. They can’t accept criticism.

Calling swimmers ‘soft’ with a username like that is pretty ironic don’t you think? 😂

i mean is it any secret? the same thing happened at UCSD, these coaches take these jobs for the pool space they get which means they can attract pros/dont have to charge them anything

Go add the dancing queen to the list! What a day!

Anyone know who the other “major sprint star” is that is set to join ASU pro group as hinted by Braden on twitter?

Omg if it’s Simone. We know she didn’t fully quit since she tried out Tennessee for a bit after Tokyo. Would love to see her back on the national team!!!!

it could also be abbey weitziel

I hope its either of these women, but he said “HUGE” sprinter on Twitter. That sounds like much more recent success.

Maybe Flo Manaudou. Bob was the coach of the French world team so makes sense.

I hate “teases”. It’s more fun when the announcements come out of the blue.

My safer guesses are, Simone Manuel, Penny Oleksiak, Abbey Weitziel, Justin Ress, Coleman Stewart, Erika Brown, or Zach Apple. My holy cow guesses are Bjorn Seeliger, or Brooks Curry. My blow up SwimSwam forever guesses are Dean Farris or Chlorine Daddy. But come on, I think deep down we all know it’s gonna be Santo Condorelli.

I was under the understanding that it is Ryan Hoffer

But he’s not a sprinter

Certainly not stating anything new that hasn’t already been said in the comment section, while the move is surprising I do think it will benefit her a lot. While she has still been successful since 2019 (bringing home multiple olympic medals is nothing short of incredible) you have got to believe it has been frustrating to not make the team in her signature event two years in a row. I would assume this is why she feel like she needed a change. The Pro group at ASU is now joke, and she now gets to work with one of the best, if not the best swim coaches!

The pro group at ASU is definitely not a joke:

As for the pro group at Stanford, ….. [crickets]