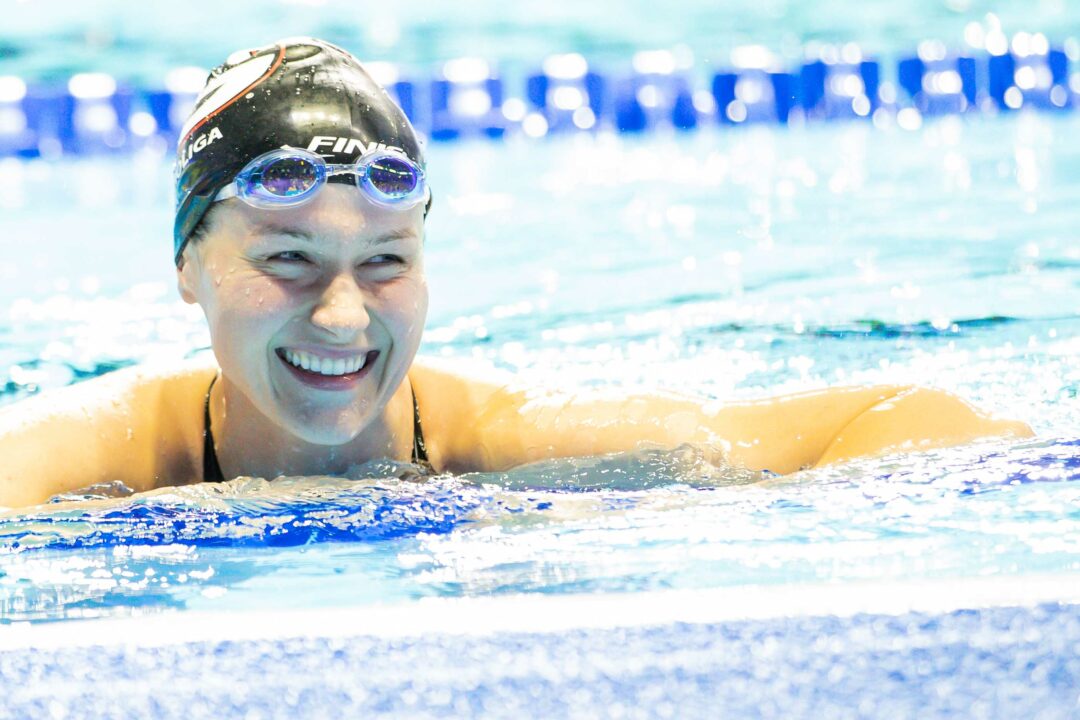 Olivia Smoliga made the move from Athens, Georgia to Tempe, Arizona, where she is training with Bob Bowman at Arizona State.  Current photo via Jack Spitser/Spitser Photography

We sat down with 2x Olympian, 14x world champ Olivia Smoliga, who is currently in Eindhoven for the ISL season 3 playoffs. Just before arriving in Eindhoven, however, Smoliga made the move from Athens, Georgia to Tempe, Arizona, where she is training with Bob Bowman at Arizona State.

American swimmer Olivia Smoliga has confirmed her move to train under Bob Bowman and the staff at Arizona State University.

Smoliga confirmed the move, long-rumored, on the SwimSwam Podcast on Wednesday.

She’s the second Georgia Bulldog to have made this move recently – Hali Flickinger, who was a year ahead of Smoliga in Athens, moved prior to the Olympic Games to train under Michael Phelps’ former coach.

“This has been kind of brewing in my mind for the past couple of months, after this summer, after the Games. Even earlier this year, I had the opportunity to talk with..Bob (Bowman)…which is really nice.

“I had a pretty nice reflective period after the Games. I was able to go home, and didn’t do really much of anything for 5 weeks and I was just thinking about what I wanted to do, where I wanted to go. It seemed like a smooth transition, because Jack Bauerle, the coach at University of Georgia, is good friends with Bob (Bowman), so it was a really easy connection to make.”

Smoliga says that after 8 years of Georgia, she was ready for a “change of pace” and to “switch up the environment.”

Smoliga says the post-grads train with the college team at Arizona State. She’s spent the last 3 weeks adapting to the base, saying that it’s similar to what she had at Georgia, but that there has definitely been an adjustment.

Smoliga says that she’s been mostly training with Bowman, but has spent 1-2 days per week doing power work with Rachel Straton-Mills, the Associate head coach at ASU, who is the primary coach for the women’s team and works with 200-down swimmers. Smoliga’s sharing a lane with Jack Dolan and Patrick Salmon, members of the Sun Devil varsity team, when she trains with Bowman.

She goes on to talk more about the training, her training partners, and her ISL experience this season.

Smoliga qualified for the U.S. Olympic Team in both 2016 and 2020, winning gold as part of the 400 medley relay in 2016 and bronze as part of the 400 free relay in 2020. She was a relay-only swimmer in Tokyo. She missed individual swims in the 100 free by .04 seconds, behind Abbey Weitzeil and Erica Brown, and in the 100 back by .12 seconds, behind Regan Smith and Rhyan White. That 100 backstroke miss was especially painful, given that she swam 58.31 in May that was a personal best and faster than anybody else went at Trials.

Smoliga is in Eindhoven preparing for the Playoff round of the 2021 International Swimming League season. Swimming for the defending league champion Cali Condors, Smoliga was ranked 94th in MVP scoring through the regular season, even after missing her team’s first match of the season. She averaged almost 23 points/match in her last three. The Condors open their season on Thursday against Energy Standard, DC Trident, and Iron.

I really think she could’ve got that second spot in the 200 free. Backstroke is really crowded, you can’t make the team by just having that last 50 down, need more speed now for sure. Her 100&200 frees have been looking way better lately.

I am just here waiting for Bobo Gigi’s comment. He never fails to remark when there is an article about Smoliga. Bobo, Mon Cheri…?

Did you listen to the podcast?

I wonder what the AD thinks about the club program being more important than the underperfoming college program?

Underperforming according to you.

How did they do last ncaa season?
Why did they redshirt the season? What were the advantages to redshirting?

Did someone tell you that it was more important? 🤔

Why would she go train with Bob and his distance group? Makes no sense. Go somewhere that will harness her speed and change it up.

I remember her saying something about wanting to get the 200 free “under her belt” during the lead-up to trials. Perhaps she’s hoping to improve her endurance in order to swim the 4×200 internationally?

McKeon cut her 200 free and it gave her advantage in sprint.

Well, it’s not exactly like Baurle is known as a sprint coach.

When she was at Georgia and swimming her best, she wasn’t training with Bauerle but with sprint coach.

While it isn’t necessarily the decision I would make this is the sort of mindset that had people thinking that Dressel made a mistake going to Florida.

Lots of different training philosophies and programs out there that work. A good fit is a good fit. She obviously thinks its a good fit, only time will tell.

Dressel would have gone 16.9 if he went to Auburn, smh /s

Yeah, look what a disaster it was for Caeleb Dressel to go to Florida to train under Gregg Troy. Too bad Olivia didn’t check with you first.

If only Olivia would’ve consulted with you, Chas E, she could’ve avoided this tragedy.

Best of luck to Olivia. I heard McKendree was a close second! 🙂

I just love her mood! Such an inspiring athlete

Best of luck in your next chapter!