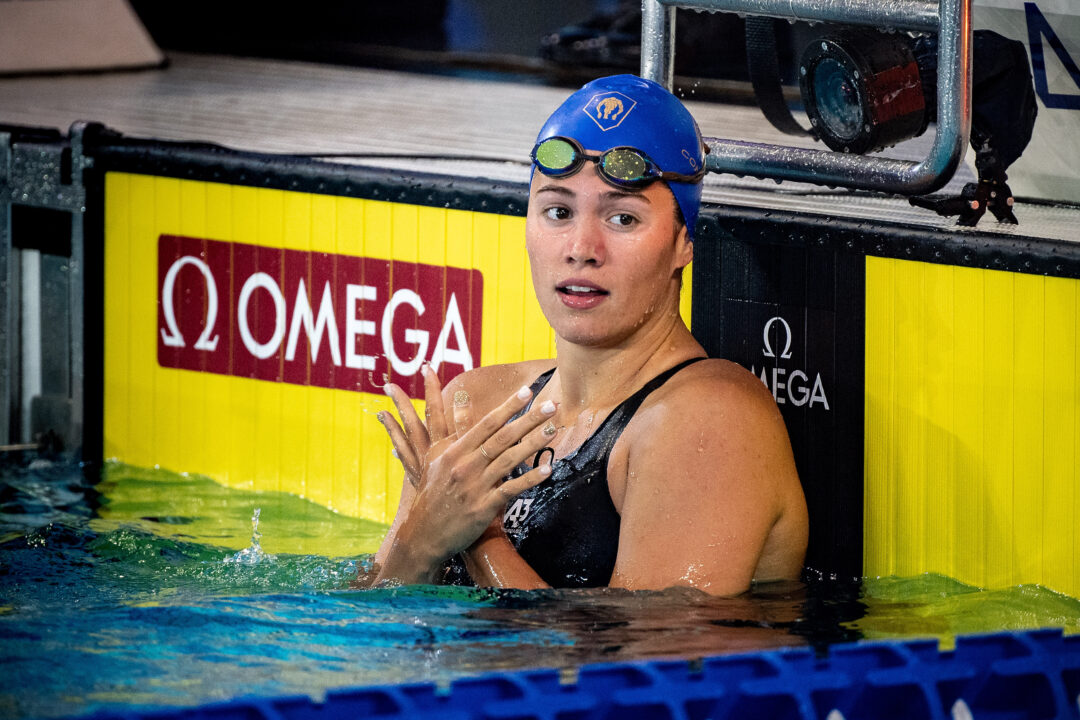 Beata Nelson, who led all swimmers in regular season earnings in the ISL, is expected to race for the Cali Condors on Thursday. Archive photo via Giorgio Scala / Deepbluemedia / Insidefoto

CBS Sports Network will air Match #1 of the 2021 International Swimming League playoffs on Thursday and Friday of this week. Match #2, which is scheduled for Saturday and Sunday, is not listed on the network’s television listing, and a request on Wednesday to the league for more information about the Playoff television schedule went unanswered.

During the regular season, all matches in the United States that weren’t on CBS Sports Network were aired on the ISL’s website, for a fee.

ISL Playoff #1 will feature Energy Standard, the 2019 champions, Cali Condors, the 2020 champions, DC Trident, the “Match of Death” winners, and Iron, the last seed, #8, to sneak into the Playoff rounds.

While we don’t know exactly which swimmers have arrived, reports are circulating that a number of named Playoff athletes have withdrawn from their first match, or from the Playoffs altogether. For Energy Standard, the latter group includes at least Florent Manaudou.

Still, those two teams are good enough that they will likely have no issue taking the top two spots in this match against the bottom two seeds and beginning their journey toward the final in early December in Eindhoven.

Match #2 features one American team, LA Current. They’ll face off with London Roar, Toronto Titans, and Aqua Centurions. With the way that the ISL has set up the playoff schedule, LA, effectively, has to beat Toronto in that matchup, and really could use a win to advance to a third straight final.

Even with a number of notable absences, Match #1 is still expected to have some of the league’s biggest names, including Chad le Clos, Siobhan Haughey, Sarah Sjostrom, Beata Nelson, regular season World Record breaker Coleman Stewart, and Ranomi Kromowidjojo.

We won’t find out for sure who is racing, though, until start lists are unveiled shortly before the meet on Thursday.

I set my DVR to record the ISL any time it was on CBS Sports. On almost all of them it just ended up recording “The Jim Rome Show” that played in its place instead. (One of the bigger owns a TV network can do.)

Consider subscribing to ISL to support the league.

Ooooooh so ISL is a charity now? Good to know. That changes my whole perspective on the constant frustration I have with them.

Do you like watching it? If it doesn’t become financially viable soon it will probably fold. “Charity” is about doing something selfless. Paying for something that you like and want to continue existing is not “charity”.