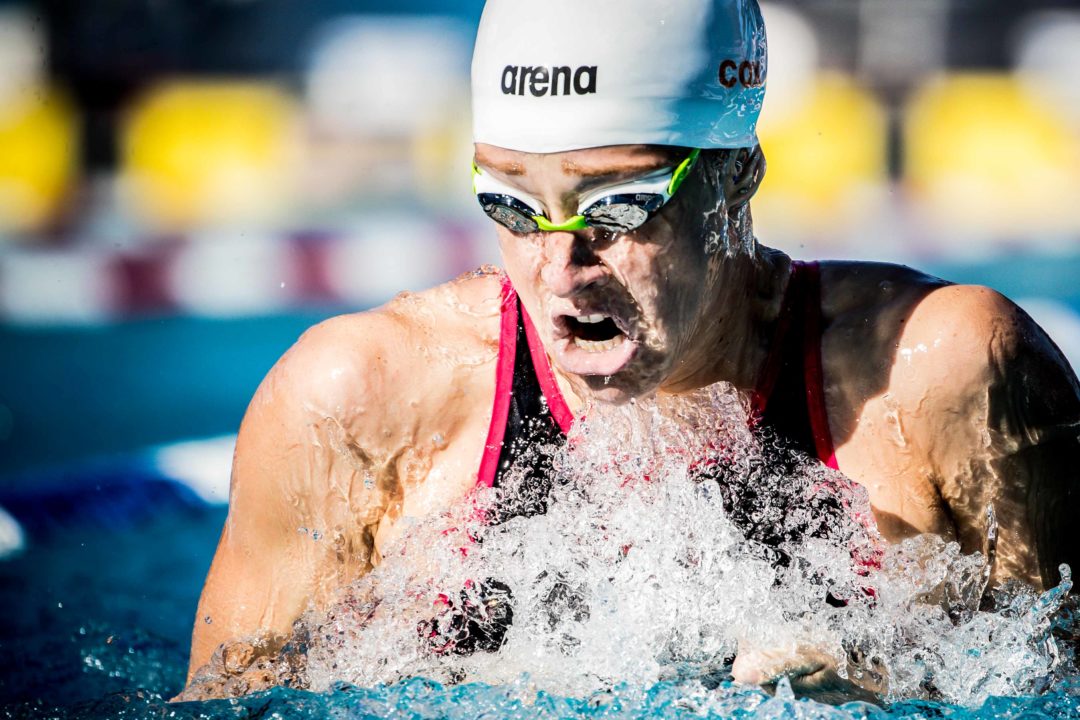 The IMer was supposed to go to med school this fall after what would've been her final summer as a competitive swimmer. Now what? Archive photo via Jack Spitser/Spitser Photography

With timelines pushed back a year for the next Olympic Games in Tokyo, swimmers are re-adjusting their preparations for the new schedule. However, some swimmers, like Madisyn Cox, had plans for their lives after swimming that could now conflict with a 2021 Games.

In 2019, Cox announced her intention to go to medical school after the summer of 2020 (Olympics or not) and stop swimming. She’ll now have to figure out if she can defer admissions to a school for a year to realize her Olympic aspirations or end her competitive career.

“As of right now, I’m not exactly sure what [my plans] look like yet,” Cox told SwimSwam.

“I do know I am going to try to work it out so that I am able to train for [Olympics] Trials next year. There are a few moving pieces that factor into whether I will be able to do so or not. The first being the dates of both the Games as well as the start dates of medical schools I am still looking at. Another piece of it being which medical school I actually end up going to and if they will let me defer a year so that I can train.”

Since Cox said that, the IOC announced the 2021 dates of July 23 to August 8. She’ll now have to figure out what school she wants to attend and then work with that school to defer her start date until after the 2021 Games.

“I’m going to try my best to work it out so that I can swim,” she said.

An All-American and very successful collegiate athlete at the University of Texas, Cox continued to progress postgrad and looked to be a serious threat in the IM races to score a spot on Team USA’s roster for the 2020 Olympics before the coronavirus pandemic ultimately postponed the Games. As it stands in the 2019-20 season (which is now all but over), Cox is ranked sixth in the world in the 200 IM and 11th in the 400 IM (fourth among Americans in the 200 and third in the 400).

Love seeing stuff like this. Hope people like Madisyn and Katie Meili can show athletes that you dont need to focus on one dream and can pursue both if you want and do it excellently.

Med school has increasingly shifted to more independent learning and less of a structured 8A-5P class structure. Tough call…everybody learns and studies differently. Some of the material is repetitive from college classes but the volume of material is substantial. At least there aren’t any Boards 1st year.

There is zero chance you could train at an even remote level and do full-time first year (or any year) medical school).

As someone who has been a medical student and D1 collegiate swimmer, I can attest to the incredible demand of med school (and compare it to swimming). The days are much longer than 8-5 regardless of curriculum style and the level of material is not even comparable to undergrad. It would be very difficult to succeed in school, prepare for boards (which students are already studying for 1st year), and train with the intensity of an elite swimmer.

Defer!
(Honestly, this didn’t cross my mind for Madisyn until you posted this article. She likely would NOT have the time to train physically and mentally 5-6 hours per day AND do the intense schooling.)