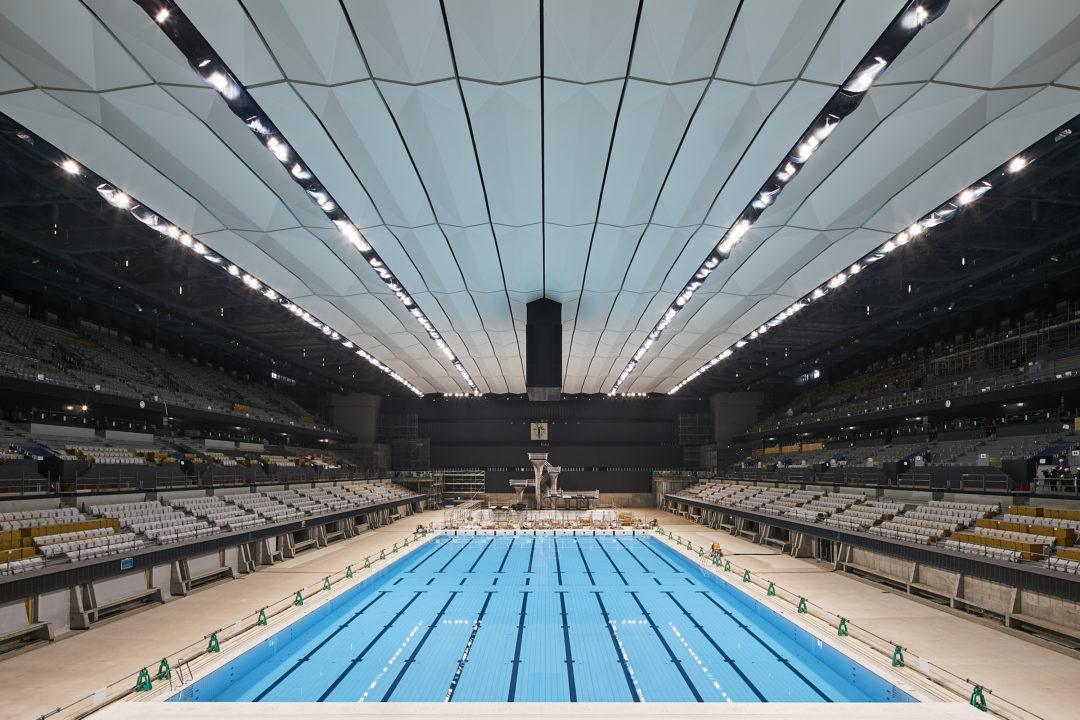 Let the countdown begin, as the IOC announces the official new start date of the 2020 Olympic Games, rescheduled to next year due to the COVID-19 pandemic. Archive photo via Tokyo 2020

The New Dates for the Tokyo 2020 Olympic Games are July 23rd to August 8th. That comes almost exactly one year after the original dates of July 24th to August 8th

The Paralympic Games will be held from August 24th to September 5th.

“This decision was taken based on three main considerations and in line with the principles established by the IOC Executive Board (EB) on 17 March 2020 and confirmed at its meeting today. These were supported by all the International Summer Olympic Sports Federations (IFs) and all the National Olympic Committees (NOCs):

Additionally, the dates allow Games organizers to deal with the ‘constantly changing landscape and disruption caused by the COVID-19 pandemic.”

In the original schedule had the Games been held in 2020, pool swimming would have taken place July 25th – August 2nd. With the revised dates reflecting almost an identical timeframe for the 2021 edition, congruity would have pool swimming running July 24th-August 1st.

We will publish the official competition schedule as soon as it has been revealed.

Following today’s decision, the IOC President Thomas Bach said: “I want to thank the International Federations for their unanimous support and the Continental Associations of National Olympic Committees for the great partnership and their support in the consultation process over the last few days. I would also like to thank the IOC Athletes’ Commission, with whom we have been in constant contact. With this announcement, I am confident that, working together with the Tokyo 2020 Organising Committee, the Tokyo Metropolitan Government, the Japanese Government and all our stakeholders, we can master this unprecedented challenge. Humankind currently finds itself in a dark tunnel. These Olympic Games Tokyo 2020 can be a light at the end of this tunnel.”

Andrew Parsons, the President of the IPC, commented: “It is fantastic news that we could find new dates so quickly for the Tokyo 2020 Games. The new dates provide certainty for the athletes, reassurance for the stakeholders and something to look forward to for the whole world. When the Paralympic Games do take place in Tokyo next year, they will be an extra-special display of humanity uniting as one, a global celebration of human resilience and a sensational showcase of sport. With the Tokyo 2020 Paralympic Games 512 days away, the priority for all those involved in the Paralympic Movement must be to focus on staying safe with their friends and family during this unprecedented and difficult time.”

The President of the Tokyo 2020 Organising Committee, Yoshirō Mori, said: “IOC President Thomas Bach and the Tokyo 2020 Organising Committee held a conference call today to discuss in detail the revised dates of the Tokyo 2020 Games. Minister for the Tokyo Olympic and Paralympic Games Hashimoto Seiko and Tokyo Governor Koike Yuriko joined the call. I proposed that the Games should be hosted between July and August 2021, and I really appreciate that President Bach, having discussed this proposal with the various international sports federations and other related organisations, kindly accepted my proposal.

“A certain amount of time is required for the selection and qualification of athletes and for their training and preparation, and the consensus was that staging the rescheduled Games during the summer vacation in Japan would be preferable. In terms of transport, arranging volunteers and the provision of tickets for those in Japan and overseas, as well as allowing for the COVID-19 situation, we think that it would be better to reschedule the Games to one year later than planned, in the summer of 2021.

“Notwithstanding the postponement of the Olympic and Paralympic Games for the first time in history, and various other issues that have already been highlighted, the event schedule is the cornerstone of future preparations, and I am convinced that taking this decision promptly will help speed up future preparations. I would like to thank all the stakeholders, including the host city Tokyo and the Government of Japan, for their hard work during this short period. The Tokyo 2020 Organising Committee will continue to work hard for the success of next year’s Games.”

not having the olympics would be truly devastating. not having the scheduled world championships would be less soif they can be properly implemented in the calendar. i’d say Olympics summer ‘21, world champs late spring ‘22 (is short course championships time) and all the others (pan pacs, etc) will just be the way they are. the people will swim fast either way lol

Sounds like a reasonable solution.
OFF TOPIC QUESTION: Before the current shutdown, I was planning to do some backyard remodeling. Now, I’m seriously considering adding an Endless Pool. I’ve never swam in one. But I bet many of you have. What’s your experience? What did you like? Not like? I can get a hard workout with my Masters team. Can the Endless Pool give me 20’ of easy aerobic swimming? Many thanks.

Personally I would stick with Masters and opt to get a hotub, grill, a smoker, and maybe an actual BBQ pit in space allows.

Xman- Exactly. Swimming alone in one spot may sound like a good idea until you actually do it.

Now we have to wait for all the outdoor dates / locations changed again later because of heat (which the Japanese are not telling the IOC about). Most of the outdoor events will be moved from Tokyo, in a slow, costly process that already started for 2020 before coronavirus hit.

I think the big question is when is Worlds now rescheduled to as they are unlikely to go ahead at the same time as the Olympics. My guess is early 2021 or they cancel it. It’s illogical really to do it in 2022 as some athletes may already have multiple championships to taper for (Commies, Pan Pacs, Europeans, SC worlds) and so they would struggle to fit it in at a good time unless some events are cancelled.

Move it to summer 2022 and cancel Pan Pacs. No one will miss it.

There’s no reason to have pacs/euros when you have a world championship meet. Why not? Surely it would only be better for the sport.

Should keep Commonwealths and Asian Games though as they are bigger multi-event championships that only come around every 4 years.

No mate. Commonwealth games are lame.

Maybe they don’t have the same amount of depth as a Pan Pacs or Europeans however that isn’t going to stop me from excitedly cheering on my country England.

ya but it’ll just make worlds that much more exciting

It’s crazy that this started with the IOC dragging its feet, and then almost as soon as Thomas Bauch’s plea for “four weeks” to make a plan, the entire thing comes together in less than one. Awesome work!

In the movie Star Trek III, when Captain Kirk asks Scotty, “Mr. Scott. Have you always multiplied your repair estimates by a factor of four?” Scotty replies, “Certainly, Sir. How else can I keep my reputation as a miracle worker?”

So will FINA either keep it and have the B teams sent, or move it to the beginning or the end of the year? I’m not sure but I would guess that beginning and end of year would be pretty open as far as high level meets go since it’s now an Olympic year but they should definitely move it.