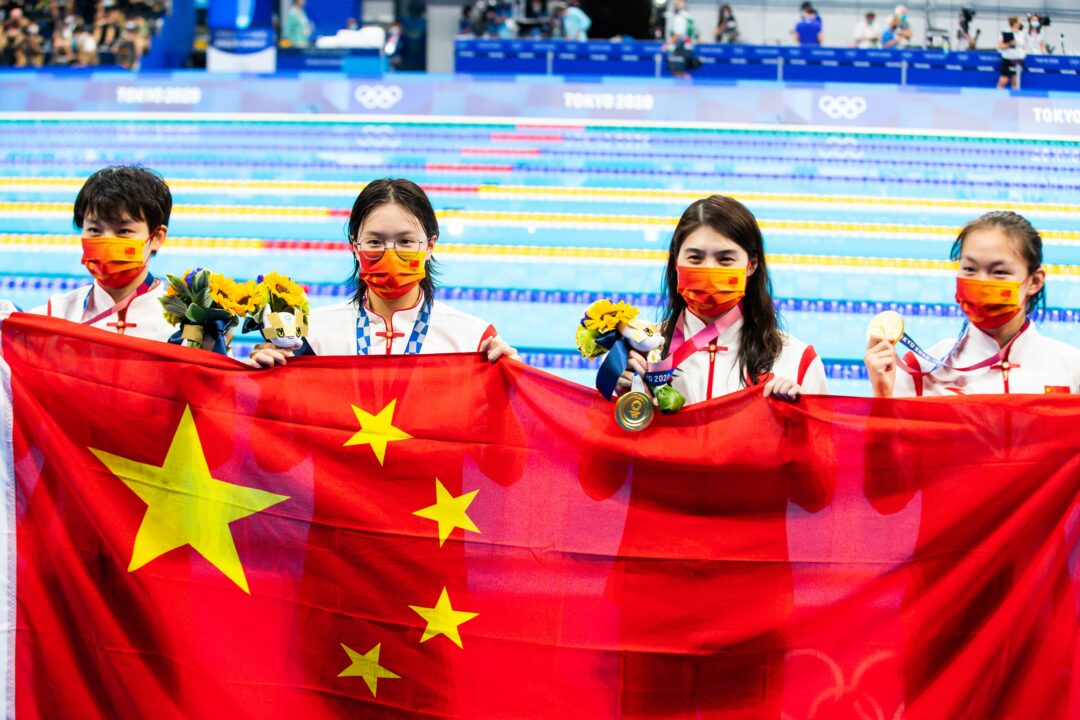 Last night there were 5 finals and 4 semifinals, which lasted 3.5 hours. A lot happened. Check out the biggest swimming headlines from day 5 here for more. Current photo via Jack Spitser/Spitser Photography

Last night in Tokyo was the longest finals session thus far in the pool, featuring 5 Olympic finals (two that were 800 meters long) and 4 semi-finals events, totaling 9 different events contested last night in the U.S./in the morning in Tokyo. A lot of big headlines happened. Read on for the biggest swimming headlines from day five of the Tokyo 2020 Olympics.

It was a dogfight for the first-ever contested Olympic title in the men’s 800 free. For the majority of the race, Italy’s Gregorio Paltrinieri looked to be on his way to winning the title from lane eight, until Ukraine’s Mykhailo Romanchuk and an accelerating Bobby Finke of the USA inched at him during the final 50.

During the final meters, however, Finke turned on his primal speed towards the wall to hit another American record and first-ever 800 free Olympic gold. Despite drastically fading in speed, Paltrinieri graciously accepted silver as Romanchuk snagged bronze in a historic final.

20-year-old Aussie Zac Stubblety-Cook stormed the men’s 200 breast final, featuring some of the fastest men in history to ever swim the event, and won the Tokyo 2020 Olympic title in an Olympic record time of 2:06.38.

Picking up his second breaststroke silver medal of these Games was Dutchman Arno Kamminga, finishing ahead of Finnish veteran Matti Mattson, who both knocked off the current world record-holder and defending Olympic champion, ROC’s Anton Chupkov.

Newly-minted Olympic record-holder Emma McKeon of Australia will accompany Campbell into the final, looking to upgrade her Olympic bronze from the 100 fly final. Also qualifying into their second 100 free Olympic final are Sweden’s Sarah Sjostrom and USA’s Abbey Weitzeil.

Reigning World champion and 100 back Olympic champion Evgeny Rylov of the ROC has set himself up to top another backstroke final, this time the 200 back. Gliding into the wall, Rylov will be joined by Brit Luke Greenbank, also registering a sub-1:55 effort.

After picking up Olympic silver in the 100 fly final, China’s Zhang Yufei demolished the 200 fly final to upgrade to Olympic gold in a sub-2:04 Olympic record. Zhang’s time marked the fastest time in the textile suit era (2010-present) and is now the No. 3 performer all-time and No. 2 performer in Chinese and Asian history.

Also upgrading her Olympic medal was American Regan Smith, who smashed a second off her lifetime best to earn silver in this event after taking bronze in the 100 back final. Teammate Hali Flickinger took her second bronze medal of Tokyo 2020 for a USA 1-2 finish.

American Caeleb Dressel was out like a lighting off the blocks for the men’s 100 free final, yet he knew that the defending Olympic champion, Aussie Kyle Chalmers, is a strong closer. It was extremely close at the finish, with Dressel and Chalmers touching 0.06s within each other for the gold. Looking at the scoreboard, it was Dressel who took the win with a new Olympic record time of 47.02.

Picking up his second Olympic medal of the Games was ROC’s Kliment Kolesnikov.

After breaking the Olympic record with the No. 2 performance in history in prelims, South African Tatjana Schoenmaker will once again swim lane four of an Olympic final, this time in the 200 breast. She will be joined by teammate Kaylene Corbett, making it two RSA representatives in the women’s 200 breast final.

Following suit were the Americans, where Annie Lazor and Lilly King will both contend for 200 breast medals alongside ROC teen Evgeniia Chikunova.

The last Olympic final that was determined on day five was the men’s 200 IM, which is shaping up to be a race to watch. Taking the top seed will be China’s Wang Shun, who came home with a blazing 27.89 closing 50 free split. Also in will be USA’s Michael Andrew, who swam a bold racing strategy that landed him 4th into the final.

Closing with an even faster 50 free split was Brit Duncan Scott, who snagged the No. 2 seed with a 27.55 closing 50. He will be accompanied by medal threat Japan’s Daiya Seto, who swam out of lane eight but is the No. 3 final seed. Rio 2016 Olympic champion in the 400 IM, Japan’s Kosuke Hagino, will also swim the 200 IM final.

It was the fastest women’s 800 free relay final in history, with the entire top 3 countries all obliterating the world record. Taking the surprise win was the Chinese relay of Yang Junxuan, Tang Muhan, Zhang Yufei, and Li Bingjie, setting the world and Olympic record at 7:40.33.

Finishing in silver medal position with a clutch anchor leg by Katie Ledecky was Team USA (7:40.73), taking down Team Australia (7:41.29). The Aussies formerly held the world record, which was a 7:41.50 from the 2019 World Championships.

Being the TEAM USA supporter, I gotta go with these 3:

And the fact that the Aussies totally shafted themselves in the same race doesn’t hurt either.

Why? In another thread, we said we were just sad for MA. But you have to cheer when Aussies get defeated. Why ?