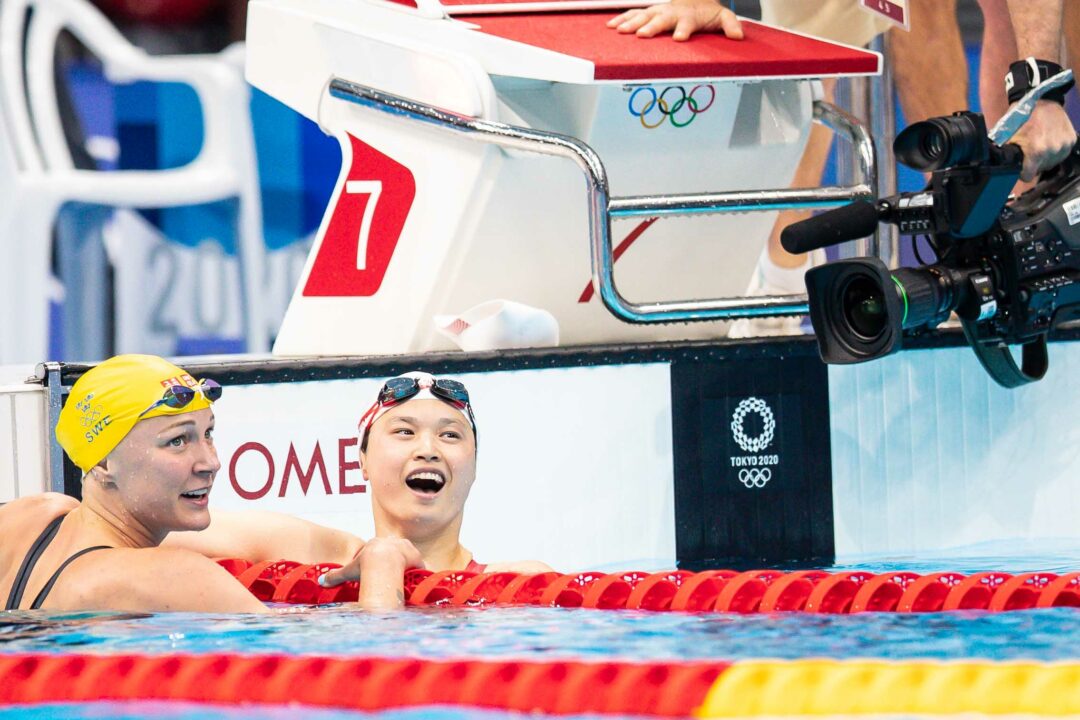 Did you miss Sunday night's action in Tokyo? Have no fear, SwimSwam has all the biggest swimming headlines from the second Olympic finals session for you.

Did you miss Sunday night’s action in Tokyo live? Have no fear, SwimSwam has all the biggest swimming headlines from the second Olympic finals session jammed in one “Tokyo Rapid-Fire” post for you.

Maggie MacNeil, the defending World champion, followed through and became the Olympic champion with a new Canadian/Americas record of 55.59, ranking as the 2nd-fastest performer in history. Her win in this event earned Canada its first-ever Olympic title in the women’s 100 fly and third-ever women’s Olympic swimming title.

With Chinese Sun Yang, the defending Olympic and World champion, out of these Olympics, World runner-up Duncan Scott of Great Britian will headline the 2020 men’s 200 free Olympic final. Scott qualified first into the final at 1:44.60, the only sub-1:45 semifinals effort of the event, which was less than two-tenths off his national mark.

It may not have been a surprise to many, but what a headline. One of the most dominant swimmers in British, European, and all-time history, Adam Peaty, nailed the optimal performance to defend his Olympic title. He now joins Japanese legend Kosuke Kitajiama as one of the only two swimmers in history to defend their Olympic title in the 100 breast.

In fact, it was a European continental 1-2-3 sweep at the medal ceremony, with Dutchman Arno Kamminga and Italian Nicolo Martinenghi joining Peaty on the podium. American Michael Andrew finished a half-second out of medal contention, yet placed ahead of Brit James Wilby and USA teammate Andrew Wilson.

20-year-old Ariarne Titmus, from the Australian island state of Tasmania, proved Katie Ledecky to be beatable at the 2019 World Championships in the 400 free. Now, she has successfully de-throned the American distance queen for the Olympic title in an Australian/Oceanian record-breaking swim of 3:56.69, which is an intimidating 0.23s off of Ledecky’s boastful 3:56.46 World Record. Titmus also became the first Aussie to win the women’s 400 free Olympic title since Shane Gould at Munich 1972.

Picking up the bronze medal was China’s Li Bingjie, re-setting her own Chinese/Asian record at 4:01.08, now ranking No. 7 all-time in event history. Meanwhile, 14-year-old Summer McIntosh placed 4th in this Olympic final at 4:02.42, a new Canadian record. 14 years old.

American backstroke powerhouse Ryan Murphy qualified first into the men’s 100 back final, setting himself up to defend his Olympic title. He will be joined by a plethora Eastern Hemisphere powerhouses, including ROC teammates 50 BK WR holder Kliment Kolesnikov and two-time World champion Evgeny Rylov.

Two-time World event champion Xu Jiayu of China has also qualified into the Olympic final alongside medal threats Italian Thomas Ceccon and Aussie Mitch Larkin. Also, France’s Yohann Ndoye-Brouard had a big crash at his only turn, which led to him missing the final and earning a DQ for pushing onto his stomach.

During the 100 back prelims, the Olympic record was broken three consecutive times. In the first semifinal, American Regan Smith, who briefly held the Olympic record between heat five and heat six of the preliminaries, re-claimed the mark at 57.86.

If you’re counting, that’s FOUR times in less than 24 hours the women’s 100 back Olympic record was taken down. It in fact happened once before during the super-suited 2008 Beijing Olympics, where the OR was sliced three times in a row in prelims and then notched once more in semifinals.

Joined by Blake Pieroni, Bowe Becker, and prelims member Brooks Curry, the US men successfully defended their 2016 Olympic title. In the 21st century, the only other time the US men won this relay title was at the 2008 Beijing Olympics (you know, *that* relay).

While Australia finished in bronze to the silver-medal Italian relay, anchor Kyle Chalmers roared a 46.44 split, which is No. 5 all-time in history.

I find it a bit disrespectful that the absence of Sun Yang is the headline in the mens 200 free. Can’t we focus on the swimmers who are there?

Seriously, how have you made the 200 free about Sun Yang rather than any of the swimmers without doping bans?