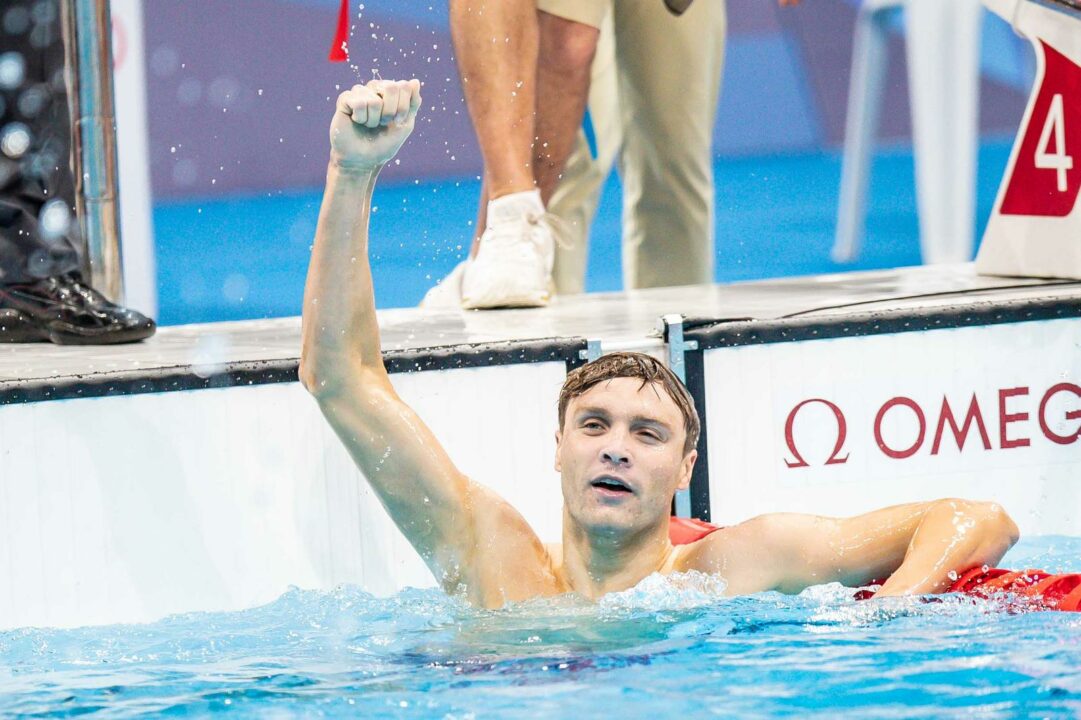 The Olympics have officially seen their first podium in the men’s 800 freestyle, with American Bobby Finke coming from behind to finish on top. Archive photo via Jack Spitser/Spitser Photography

Finke, who set the American record in the event during prelims, shattered his standard tonight, swimming a time of 7:41.87 to take the gold medal.

Reigning world champion Gregorio Paltrinieri finished second in a time of 7:42.11. Paltrinieri’s podium finish was also a surprise to some, as he barely qualified to compete in the final, finishing 8th out of prelims. The Italian superstar was diagnosed with mono earlier this year, which hindered his performances at the European Championships.

Ukraine’s Mykhailo Romanchuk touched third, slightly off of his prelims time of 7:41.28. However, he still earned a bronze medal for his efforts.

Finke’s time now ranks him 13th all-time in this event, while Romanchuk and Paltrineri remain at 8th and 6th all-time, respectively.

Paltrinieri took the race out quickly, splitting 55.15 over the first 100m, ahead of Jack McLoughlin, Finke, Romanchuk, and Florian Wellbrock.

Over the next 400 meters, Paltrinieri managed to hold on to the lead, extending it to about 3 seconds. The same group of McLoughlin, Finke, Romanchuk, and Wellbrock remained tightly bunched, battling behind Paltrinieri for the minor medals.

Then, at the 600 meter mark, Romanchuk made his move, pulling away from the pack and challenging a fading Paltrinieri. Meanwhile, Finke began to fall back from McLoughlin and Wellbrock, seemingly falling out of medal contention.

At the final turn, it appeared to be a battle between Romanchuk and Paltrinieri for the gold medal, as the men sprinted to the finish. However, on the final 50, Finke closed in a monster 26.39 to run down the field. Finke managed to get his hand to the wall first, winning the first Olympic gold in the men’s 800 free.

So far, a UF grad has medaled in all contested men’s freestyle events except the 200.

Bobby and Kieran are both rising seniors, so they haven’t graduated yet. Nesty’s phone is about to be ringing off the hook with blue-chip recruits. Florida is the future.

That was the greatest, like Misty Hyman making Australian kids call it the Hyman stroke. Took it to the titans of distance swimming and shoved it down their thoat.

Congrats to Finke, but my heart goes out to Gregorio. He had mono one month ago and still came back from disappointing heats and raced like a tiger. What a champ! I already admired him, now I worship him

This man is a racer!

IF ever there was a guy who deserved the gold, it was Finke!
The closing 30 meters were simply brilliant on his part – and the touch on the wall, perfection!

That was the most impressive last 50 I have ever seen. Absolutely a super human effort! I am lost for words to adequately describe how incredible that race was. Congratulations to Bobby and his coaches. I am breathless.