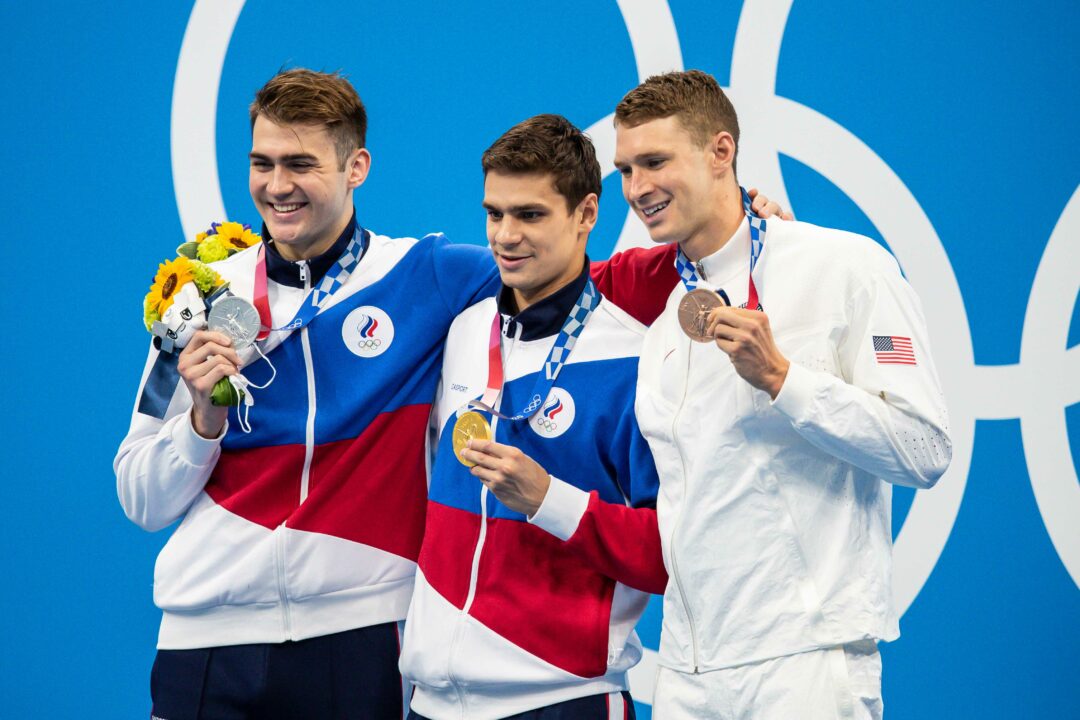 Last night was full of historical finishes and upsets across 4 finals and 3 semifinals. Check out the biggest swimming headlines from day 3 of Tokyo 2020. Current photo via Jack Spitser/Spitser Photography

Last night was an electric session in Tokyo, full of historical finishes and upsets across four finals and three semifinals events. Check out the biggest swimming headlines from day 3 of the Tokyo 2020 Olympics.

British teammates Tom Dean and Duncan Scott finished 1-2 in the men’s 200 free final, both going under the national mark of 1:44.47 from the London 2012 Olympics. Dean took the narrow win by four one-hundredths over Scott 1:44.22 to 1:44.26, both ranking No.6 and No. 7 all-time respectively in the event. Dean and Scott’s finish also marks Great Britain’s first Olympic medals in this event.

Current world record-holder Kaylee McKeown followed through and claimed the Tokyo 2020 women’s 100 back Olympic title, becoming the first Aussie woman to win the event. Her time of 57.47 was 0.02s off her own world record from this season, in other words the No. 2 performance all-time behind herself. Her time was also the fifth time the women’s 100 back Olympic record was broken during these Games. She briefly held the Olympic record at 57.88 between the last prelims heat and the first semifinal.

Taking the silver medal was Canada’s Kylie Masse, registering the No. 6 performance all-time at 57.72. Regan Smith of the USA earned her first Olympic medal, bronze, with her 58.05 finals effort. Now, McKeown, Masse, and Smith are the only three swimmers that combined to form the curent top-10 performances in history, all under 58 seconds.

Russian Evgeny Rylov made all sorts of history when he won the men’s 100 back Olympic title on day three. Rylov’s win snapped a long-standing American winning streak, which stood since Atlanta 1996. In fact, it was the first time since Melbourne 1956 that a non-U.S. swimmer won this event, excluding Moscow 1980, which the USA boycotted. Finishing in a time of 51.98, he came just 0.01s off his now-sanctioned mixed medley relay lead-off from 2019 Worlds.

Olympic runner-up and country-mate Kliment Kolesnikov stormed to the wall with a lifetime best of 52.00, finishing 0.02s behind Rylov for a ROC (Russian Olympic Committee) 1-2 finish. Kolesnikov’s time now makes him the No. 5 performer all-time, also behind Rylov.

Finishing in bronze medal position with a time of 52.19 was Rio 2016 Olympic champion Ryan Murphy of the USA.

It was the second-straight upset win where the defending Olympic champion was de-throned, this time by their teenaged teammate. As 24-year-old South African Tatjana Schoenmaker accelerated on 24-year-old defending champion Lilly King of the USA, American 17-year-old Lydia Jacoby stealthily sped up on both King and Schoenmaker to become the second 18&U Olympic champion of these Games. Jacoby’s time also made her the fourth American and seventh woman in history to break 1:05 in this event, as well as the first 18&U U.S. female to clear the barrier.

Hungarian Kristof Milak led his semifinal heat from start to finish, swimming the fastest time of the 16-swimmer field by 2.75s at 1:52.22. Along with entering the Olympic final as the top seed, Milak will contest the men’s 200 fly final as the reigning World champion, European champion, and current world record-holder.

In the same heat, Brazil’s Leonardo de Deus caught Italy’s Federico Burdisso at the finish, 1:54.97 to 1:55.11, to qualify 2nd and 4th respectively into the final. Burdisso was also able to hold off a closing Gunnar Bentz, who will represent the USA in the men’s 200 fly final seeded 6th. Polish teenager Krzysztof Chmielewski will also swim in his first Olympic final.

Before Milak’s heat, South African Chad le Clos chose the unorthodox race strategy of “flying and dying”, which came to his advantage as he held off Rio 2016 Olympic medalist Tamas Kenderesi of Hungary for the semifinal win, 1:55.06 to 1:55.17. Qualifying 8th into the final was Tomoru Honda of host nation Japan, who held off American Zach Harting by 0.04s, 1:55.31 to 1:55.35.

After leading prelims with a lifetime best, American NCAA star Kate Douglass will enter the women’s 200 IM Olympic final as the top seed. Also winning her semifinal heat and qualifying third was another American NCAA star, Alex Walsh, both staying under the 2:10-barrier at 2:09.21 and 2:09.57 respectively.

Brit Abbie Wood will be joined by teammate Alicia Wilson, who is yet another NCAA star, in this Olympic final along with Chinese representative Yu Yiting. Japanese Yui Ohashi, the 400 IM Olympic champion, will also contest in this final with Canadian medal threat Sydney Pickrem and defending Olympic champion Katinka Hosszu of Hungary.

The race I am most excited for is the W 200IM tonight. I feel this is Kate Douglass’ time to be in the spotlight.