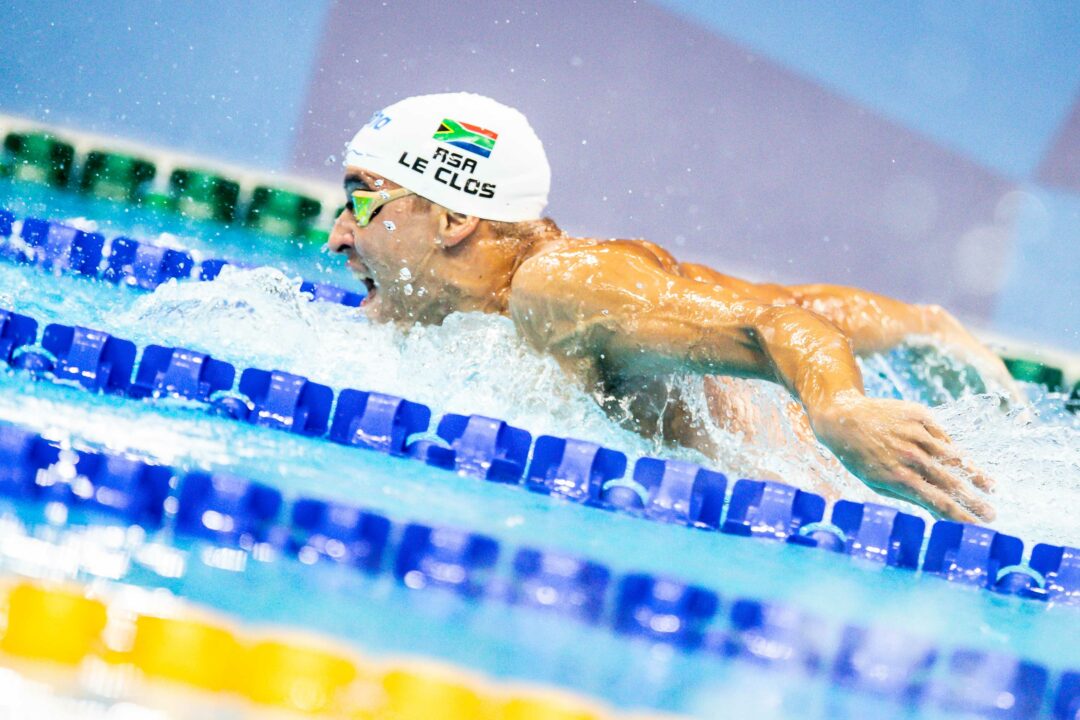 While South Africa's Chad Le Clos did earn the #3 spot in tomorrow's 200 fly final, the difference between his 2nd and 3rd 50 meters was 2.3 seconds. Current photo via Jack Spitser/Spitser Photography

South Africa’s Chad Le Clos was swimming his own race in the 200 fly semifinal on Monday. He took out the first 100 meters of his semifinals 200 butterfly about 1.5 seconds faster than he did in prelims to lead the field by 1 second at the 50-meter mark and 2 seconds at the halfway point.

Swimming out of lane eight, Le Clos turned his head to look down the pool at the swarm of competitors five times on the last 50 meters before putting his head down and throwing himself forward for three last strokes into the wall.

In prelims, the difference between Le Clos’ 2nd and 3rd 50 splits was .56. In finals, that difference grew to 2.33 seconds, an exhibit of a race plan that some call “fly and die.”

Although, when you are 2012 Olympic gold medalist Chad Le Clos, “die” still means you earn the #3 spot going into tomorrow’s final.

Le Clos touched the wall 1st in the first semifinal heat with a time of 1:55.06, .90 faster than his prelims time.

He gave a couple short nods after the race when he looked at the scoreboard, followed by a wave and thumbs up to the crowd, and a slight smile off camera. His coaches looked a bit chagrined at his strategy in the stands.

Compare Le Clos’ race to top seed Kristof Milak of Hungary who earned the top spot going into the final tomorrow with a time of 1:52.22.

Both swimmers outdid their prelims swims significantly, by .90 for Le Clos and by 1.35 seconds for Milak.

I’m trying to think of a joke about how Chad paces like Michael Andrew but I can’t think of one and I’m really tired. Goodnight swimswam, see you in the morning

He’ll win the silver medal going out a 51

He will be a nice rabbit for Milak.. I was hoping he were on de Deus side (A la Hwang)

Still hasn’t broken 55 in years.
Hopefully he will in final