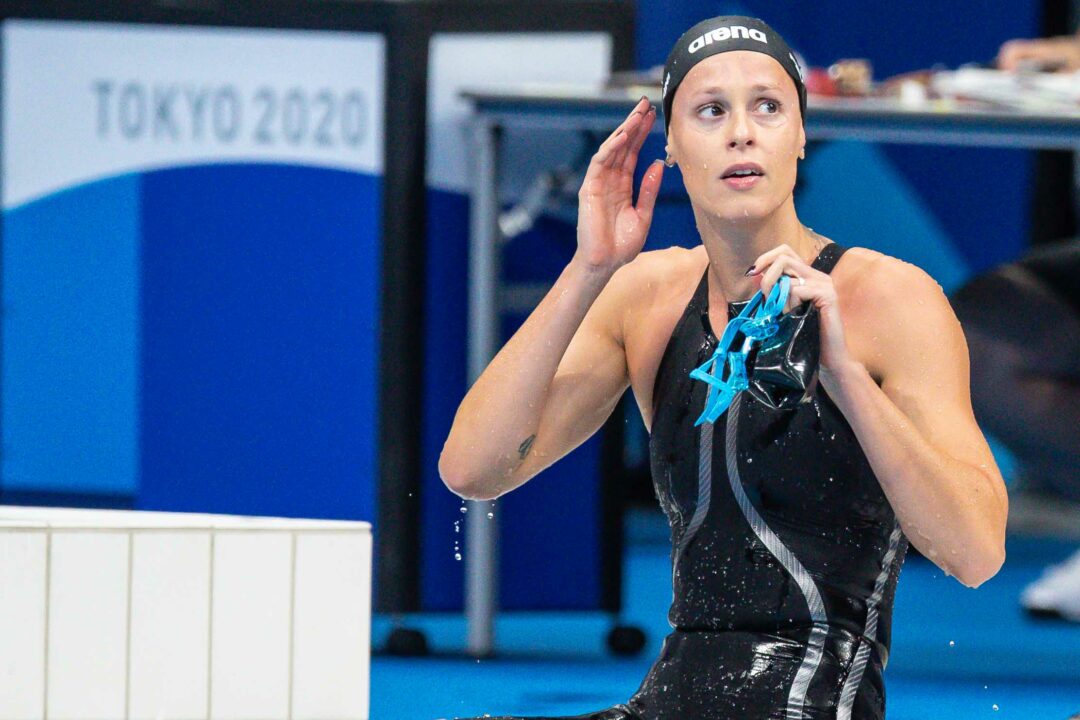 32-year-old Federica Pellegrini made history yesterday in the women’s 200m freestyle. The 32-year-old Italian qualified for her fifth consecutive career final of the event, sealing her Olympic icon status even further.

After registering a prelims time of 1:57.33, Pellegrini turned it on the following morning, posting a mark of 1:56.44. That renders her the 7th place entrant for today’s final, about a second and a half behind leader Ariarne Titmus of Australia who owns the top seed in 1:54.82.

Tracking Pellegrini’s performances, her Olympic debut at the 2004 Games in Athens at 22 reaped the silver medal, producing a time of 1:58.22 behind gold medalist Camelia Potec of Romania.

Four years later in Beijing, Pellegrini was at it again, this time wreaking havoc with a monster 1:54.82 for a new World Record and Olympic Record at the time.

Come London, the Italian fell to 5th place with a time of 1:56.73 while at the last edition of the Olympics in Rio Pellegrini posted a time of 1:55.18 to improve to 4th.

Pellegrini’s season-best headed into Tokyo sits at the 1:56.29 she scored at the European Championships. She’ll have her work cut out for her to keep up with the aforementioned Titmus, whose recent 1:53.09 nearly broke Pellegrini’s current supersuited world record of 1:52.98 from 2009.

But will she be in contention for a medal?

Don’t think it matters that much at this point.

Agree. She did it during suit era, post suits….when she was old, young…..just amazing!

Lol wait and see, nobody expected her to win again in 2017 and 2019 , she can throw a gutsy final olympic swim

She is not in contention for a medal, she might have been had Tokyo happened in 2020, but we’ll never know and it is not relevant at this point. She is already a legend for having reached the final. A pretty good last bow.

She is amazing. She won the last 2 world Championships.
Sad the Olympics was postpone and she was sick with covid. She would have been more competivive and with a shot for medal if the meeting was last year.

My original point was addressed later here, but there’s no delete button.

She will never retire. If not a contender for medals, then another final. If not a finalist then another Olympics. Etc, etc, etc…
Will we see her in Paris in three years? Sure, why not. Unless Italia produces finally a strong 200FR female swimmer. It’s long due.