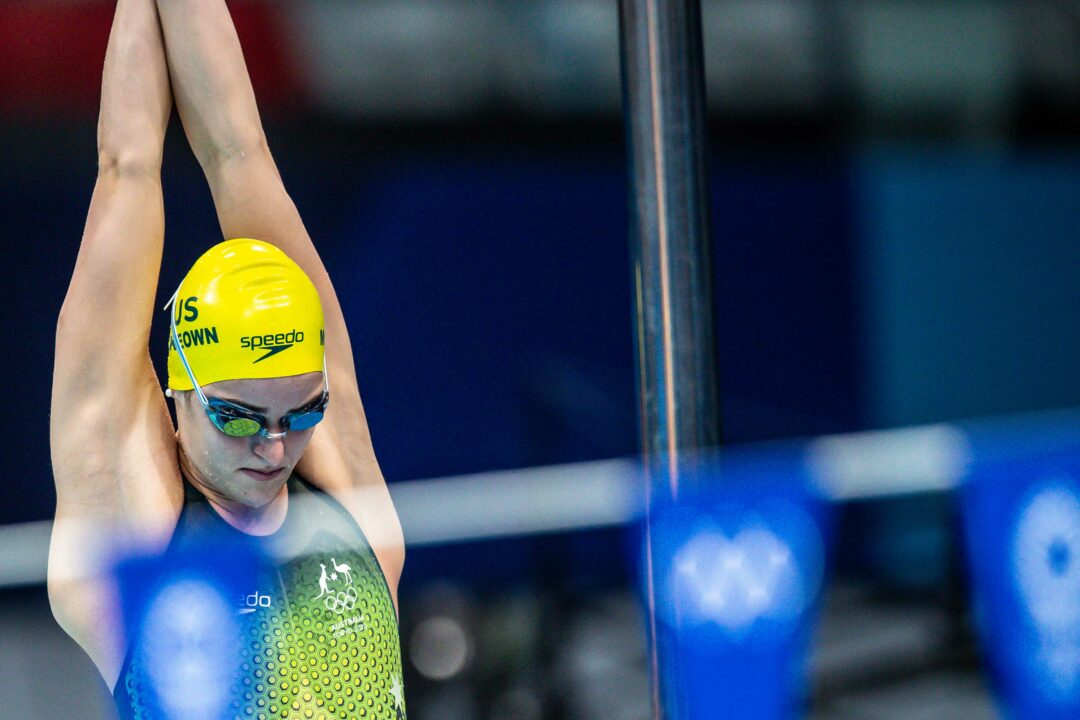 Kaylee McKeown blew away the competition in the women's 100 backstroke, putting up the 2nd fastest time in history for Olympic gold. Current photo via Jack Spitser/Spitser Photography

Kaylee McKeown has just won Australia’s first-ever Olympic gold medal in the women’s 100 backstroke with a 57.47 Olympic record. McKeown got within 0.02 seconds of her own 57.45 world record from earlier this year at Australian Trials. McKeown now holds the 2 fastest swims in the history event, along with 5 of the top 10 performances in history.

All-time Performances In The Women’s 100 Backstroke

You’ll note that the only other women who appear with the top 10 are silver and bronze medalists Kylie Masse of Canada and Regan Smith of the United States. Both Masse and Smith are former world record holders in the event, having hit a 58.10 in 2017 and a 57.57 in 2019.

Not only is this a historic swim for McKeown heat-wise, but it also marks the first time that a woman from her nation has topped the Olympic podium in the event. Australia’s first podium finish in the event was in 1932 when Bonnie Mealing took silver in Los Angles and 8 years later Judy-Joy Davies earned bronze. It wasn’t until 2012 when Australia reach the women’s 100 back podium again as Emily Seebohm delivered a silver medal swim in London.

Seebohm was also present in the Tokyo 2020 Olympic final and hit a 58.45 for 5th place, behind podium finishers McKeown, Masse, and Smith, along with 4th place finisher Rhyan White. Kathleen Dawson of Great Britain finished 6th in a 58.70 while Kira Toussaint (59.11) and Anastasia Gorbenko (59.53) rounded out the heat.

In here before the “Regan’s peaked!!!” comments

She has and Stanford won’t help. She’s a great swimmer but unlike Masse, she’s no racer.

Yeah, maybe we ought to wait to see how her 2 fly goes.

Wouldn’t be the first female swimmer to not improve past her late teens.

Here before YOZHIK screams “Meehan is gonna ruin her!”

Regan set the OLY record during the semis, not McKeown!

I thought the OR was broken 3 times in the heats by Masse, Smith and McKeown

why is this being downvoted lol it’s right

Poor Regan. Broke OR twice. And BOTH were snatched away by McKeown.

If she hadn’t already broken the world record a few weeks ago, she would have now. Great job Kaylee!

Proud Aussie here, this swim didn’t disappoint. Would have liked to see Smith post a 57 too which she was more than capable of. That was a monster swim from Kaylee, she took the first 50 out harder than the semi, I think she learnt from that semi swim, she went out too slow. Bodes well for the 200 back.

Regan only swims 57 when she is relaxed. From the outset of that race it was obvious she was not relaxed. I think the near-disqualification in the semifinal caused Regan to be overly tentative at the outset. She needed to adopt a Michael Andrew philosophy of building a huge lead.

Had she not dropped 200 IM, McKeown could have done a 1992 Kriztina Egerszegi (double backstroke and an IM golds)

Australia needs to hire D Wayne Lukas as consultant. His philosophy is you can’t win if you don’t enter. The past performances charts are so uncooperative anyway. Give yourself as many swings as possible.