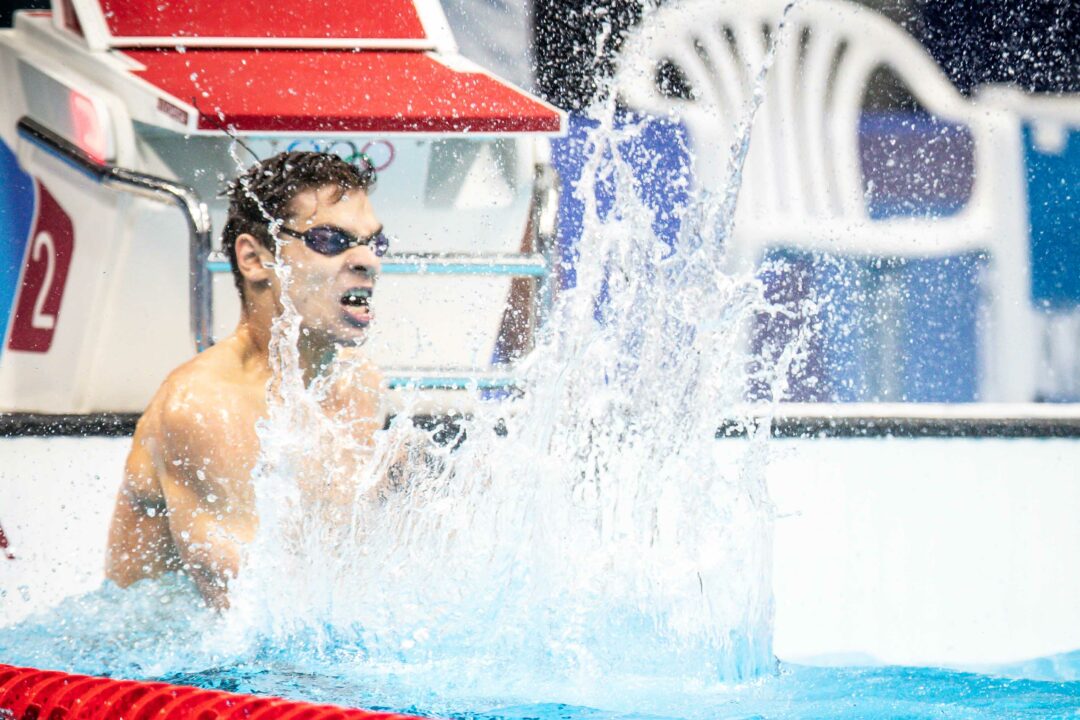 Evgeny Rylov became the first Russia to win Olympic gold in the pool in 25 years when he topped the men's 100 backstroke final in a European Record of 51.98. Current photo via Jack Spitser/Spitser Photography

Russia has long been a powerful force in swimming, landing numerous medals at major international meets in recent years, including three golds at the 2019 World Championships. But it’s been a long time since the nation won an Olympic gold medal.

Open water swimmer Larisa Ilchenko won the inaugural women’s 10km marathon event in 2008, but in the pool, Russia’s gold medal drought reached a quarter century when the Tokyo Games were postponed by one year, with the last Russian champion being crowned in 1996.

That all changed on Tuesday morning in Tokyo, as Russian Evgeny Rylov claimed gold in the men’s 100 backstroke, resetting the European Record in the process with a blistering time of 51.98.

It was actually a 1-2 finish for Russia, who are competing under the “ROC” banner due to being in the midst of serving a four-year doping ban, as Kliment Kolesnikov won the silver in 52.00.

Back in 1996, legendary sprinter Alexander Popov won a pair of gold medals in the men’s 50 and 100 freestyle, and Denis Pankratov had a sweep of his own in the men’s 100 and 200 butterfly. But after that, 25 years passed before Rylov got them back on top of the podium.

In setting some Russian history, Rylov also put a halt to a legendary American streak, as the U.S. had won six consecutive Olympic titles in the men’s 100 backstroke coming into these Games.

Defending champion Ryan Murphy was in the hunt for a repeat, but couldn’t match the early speed from the Russians and ended up with the bronze in 52.19.

Murphy is also the defending champion in the 200 back, where the Americans have also won six straight golds. Rylov, the reigning two-time world champion in that event, will now aim to sweep the backstrokes like Murphy did in Rio and put a definitive end to the U.S. dominance in Olympic backstroke.

Russia is banned. These athletes are from a cheating state & are not suppose to be here. Ignore all their results. Cheating means they’ve already lost. If you cheat and are somehow awarded something, you’ve already lost. It doesn’t carry any honor. Honor is what one is suppose to pursue. All you are witnessing is dishonor.

The thing is … people don’t seem to care. Looks like we’ve just accepted it.

Title is incorrect — Russia is not competing at these Olympics

…REBUILDING. Our good is REALLY GOOD (Dressel, Apple, Jacoby now for the women). Our bad is not terrible, but not podium-worthy. Last night felt really ‘off’ for the United states because:

None of those things happened last night. And while some semi-finals are setting up relatively good for USA (Ledecky ‘should’ medal in the 200 free, and win the 1,500 tonight), Bentz at least made the 200 fly final (doubt… Read more »

Rylov will easily win 200 back

It’s hard to believe there are clean Russian athletes.

If it’s a non-american there’s always the chance they are doping with you people right? But most Americans are cleaner than holy water lmao

The US doesn’t have an active state sponsored doping operation

Why is Russia not competing under its name?

3
-6
Reply
NOT the frontman of Metallica

Does it count as a medal for Russia though? I thought they weren’t competing under their flag…