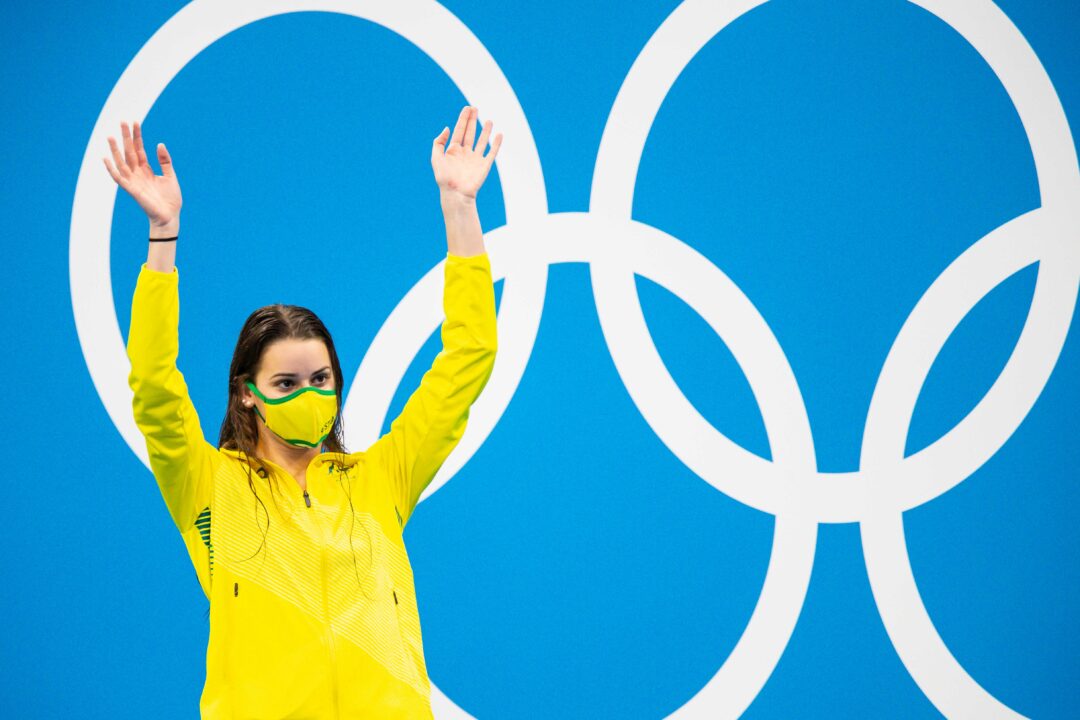 Kaylee McKeown go her hand on the wall first in the women's 100 backstroke, leaving us wondering what else the Australians have in store. Current photo via Jack Spitser/Spitser Photography

Just as Ariarne Titmus did on day 2 of the Tokyo 2020 Games, Kaylee McKeown led the way for Oceanians on day 3 of the Olympics.

Kaylee McKeown swam her way to a gold medal Olympics at her first-ever Games, topping the podium in the women’s 100 backstroke with a 57.47 Olympic record. That time for McKeown is only 2 seconds slower than the 57.45 world record she produced earlier in 2021 at Olympic Trials.

This medal for Australia is the 4th one that the country has won in just 3 days. On day 1 the Australian women won gold in the 4×100 freestyle and Emma McKeon took bronze in the 100 fly and then on day 2 Ariarne Titmus took gold for herself in the women’s 400 free.

Should they keep this pace, Australia is easily on track to beat their 10-medal total from both Rio 2016 and London 2012. They’ve actually already surpassed their gold medal count from back in 2012 where they only managed to pick up 1 victory.

Upon the completion of day 3 finals, Australia is actually tied with the US in terms of gold medals but is second overall due to the lower silver and bronze medal count:

In light of McKeown’s gold medal swim and the momentum that Australia is likely to be feeling right now, we are wondering if it’s possible for the country to catch, or even pass the USA on the medal table. It would certainly take the perfect storm of Australian swimming to acheive the feat but the country actually quite a number of medal opportunities over the next few days which include a number of events where the USA could miss the podium altogether.

Another spot where the Australian could continue to make up ground is in the 2 remaining distance events. While Katie Ledecky is a lock for a podium finish, Ariarne Titmus has proven that she can beat Ledecky, but the question reamains: can she do it again? If Titmus and Ledecky go 1-2 in the 800 free and then Maddy Gough joins Ledecky on the 1500 free podium, there would essentially be no change in the relative positions of the Americans and Australias to each other on the medal table.

The final push for the Australians will need to come from a few surprises. If the aformentioned Australians do what they need to do and close the gap a little bit, a number of swimmers remain on reserve. Namely Matthew Temple (100 fly), Jenna Strauch (200 breast), and Tristan Hollard (200 back).

Medals Table for Oceania Through Day 2