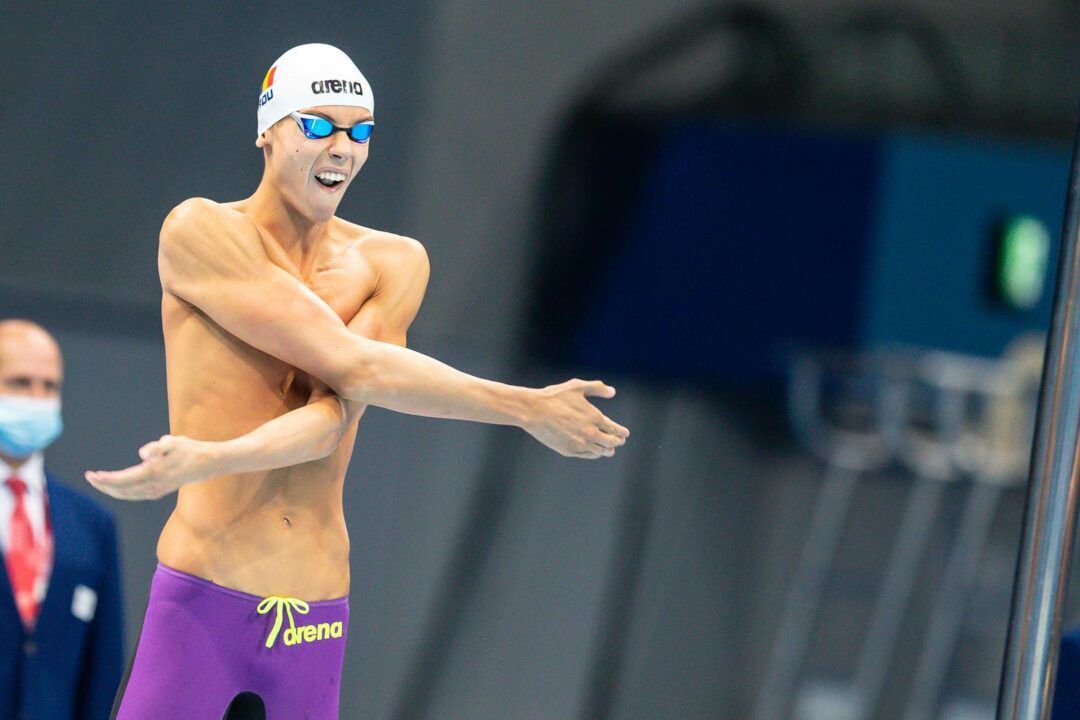 The men’s 200m freestyle was one of the most anticipated race of these Olympic Games, with the entire field of eight capable of taking home the gold.

Brazil’s Fernando Scheffer claimed the bronze in 1:44.66 but just .02 behind was Romanian teenager David Popovici who checked in with 1:44.68 for 4th place. As a consolation, 16-year-old Popovici notched a new European Junior Record for his effort.

Heading into this competition, Popovici’s personal best rested at the 1:45.26 he posted in the semi-finals of the men’s 200m free at this year’s European Championships. That result checked in as the official European Junior Record, in addition to a Romanian national record.

Earlier here in Tokyo, the Romanian hit a prelim swim of 1:45.32 then dropped that down to his first sub-1:45 outing ever.

Of note, the Olympic final in Rio saw just one swimmer, Sun Yang of China, snag a 1:44-time whereas here the top 4 were all under that barrier.

With his top 4 result, Popovici overtakes his own European Junior Record and sets himself up for a potentially explosive 100m freestyle individual event here. He will also be taking on the 50m free race toward the end of the meet.

Absolute sensational race from a 16 year old. Soon Popovici will win every single race in 100, 200 and even 400 free no matter the competition’s level/name.

Romanian dailies, like the major paper & online daily Cotidianul, are writing astonishingly negative articles about Popivici and Glinta, e.g. they “lost the podium”, instead of celebrating the remarkable achievements. They don’t even mention EJR. It is not only incompetent journalism, but it is also one that may affect not only the morale of the public but also that of the athletes… It’s good that Popovici has the mental strength to quite rightly tell them off that he WON the 4th place, instead of “losing” the podium. There is something very wrong with Romanian sport media when international specialist media is applauding the amazing achievement, but the former chooses to be stupidly negative.

Duncan Scott making sure he gets next to this kid in all the photos, makes him look like Paul “The One True Unit” De Lakis.

Seriously though, when Popovici puts on his adult muscle he’s going to be in a Milak/Peaty like different race.

PVDH finished 4th in 200free in his first Olympics (1996 Atlanta). Popovici did the same.

This guy is incredible. The only question is whether he will wait until Fukuoka 2022 to go 1:43 (for starters) or will do it before.

The PDVH-model freestyler is back in vogue!