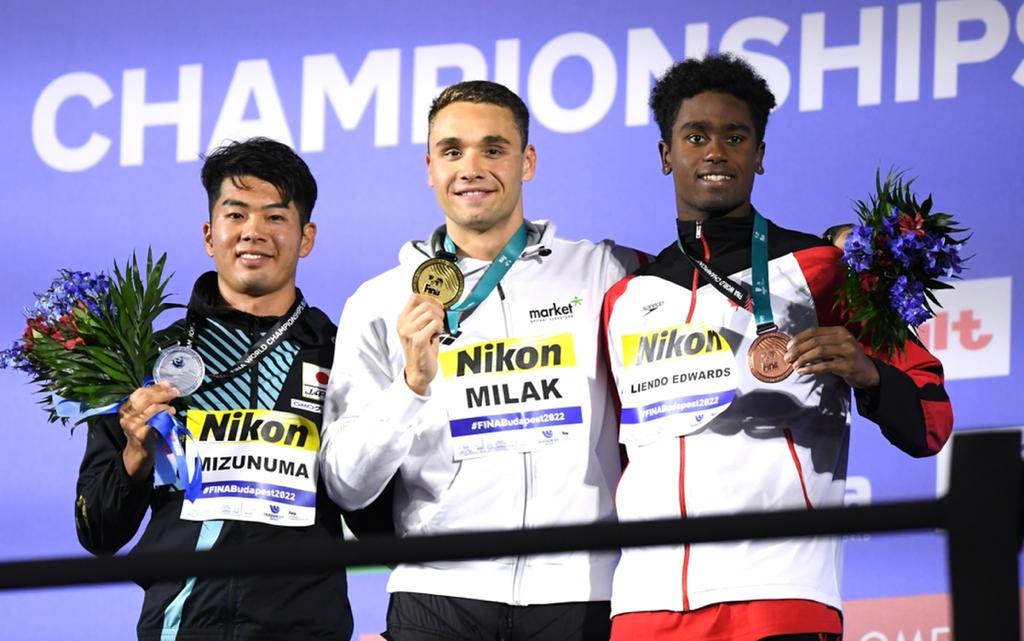 After winning his 3rd medal on day 7, Josh Liendo has won the most medals of any Canadian man at a single World Championships. Current photo via Fabio Cetti

On the 7th day of racing at the 2022 World Swimming Championships, Josh Liendo won 2 medals, bringing his total at this meet to 3. That makes Liendo the Canadian man with the most medals at a single World Championships meet.

Liendo’s first medal of the meet came in the 100 freestyle when he swam a 47.71 to take the bronze medal. On day 7 he started off with a 50.97 to take 100 butterfly bronze and then he contributed to Canada’s silver medal-winning mixed 4×100 freestyle relay.

Liendo, Javier Acevedo, Penny Oleksiak, and Kayla Sanchez delivered a 3:20.61 on the relay to break the national record and out-touch team USA for the silver medal. Australia was first overall with a 3:19.58 world record.

Ryan Cochrane managed to win 2 medals at 4-straight World Championships he won 2 medals in different combinations of the 400 free, 800 free, and 1500 free for 4 years but never landed on the podium in all 3 at a single World Championships. The closest that Cochrane came to getting 3 medals was in 2013 when he took silver in the 1500, bronze in the 800, and 4th in the 400 by just 0.17 seconds.

While Liendo now had the most medals of any Canadian man at a single World Champs and Oleksiak and Masse are tied for #1 all-time, the records don’t stop there.

Summer McIntosh, Penny Oleksiak, Taylor Ruck, and Kayla Sanchez have all won 3 medals at the 2022 World Championships, which is tied for the most by a Canadian woman at a single World Champs. Kylie Masse, Maggie MacNeil, and Rebecca Smith also pulled off that feat in 2019 (as did Oleksiak and Ruck. That means that there are 7 women tied for that record.

Several of them will have a shot at winning their 4th on the last day of the meet as Summer McIntosh will race in the 400 IM and the other 6 could race the 4×100 medley relay. It’s conceivable that Masse, Oleksiak, Ruck, Smtih, and MacNeil, could all race the 4×100 medley between prelims and finals.

Finally, the Canadian delegation as a whole in 2022 has broken the record for most medals at a single World Championships meet. So far Canada has collected 9 medals at this meet, which is 1 more than the 8 medals they won at the 2019 edition. If McIntosh medals in the 400 IM on day 8 or Canada medals in the women’s 4×100 medley, the total could reach 10 or 11 for 2022.

I hope he can follow the footsteps of Victor Davis, Alex Baumann and Mark Tewksbury at the highest stage, i.e Olympic.
What Tewksbury did at Barcelona 1992 in men’s 100m backstroke can be an inspiration for him. He can learn how Tewksbury caught the favorite Jeff Rouse (WR holder) in the very last stroke to touch the wall 1st after trailing behind the American.

Further back, but Annamay Pierce won a silver in 2009, not no medalists like the article states