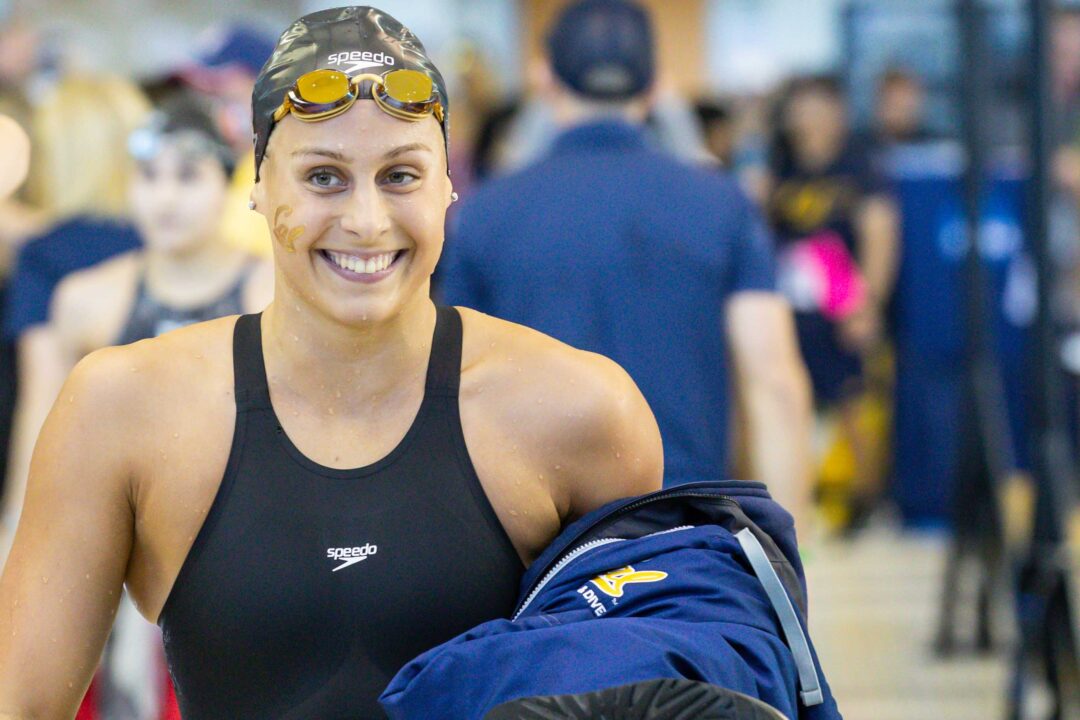 Ivey was Cal's highest individual scorer at both the 2022 Pac-12 and NCAA Championships and was highlighted by a runner-up finish in the 200 free at NCAAs. Archive photo via Jack Spitser/Spitser Photography

2022 NCAA runner-up in the women’s 200 freestyle Isabel Ivey is in the transfer portal. Ivey is the latest member of the Cal women’s roster to be in the portal in the wake of head coach Teri McKeever being put on a Leave of Absence.

Entering the transfer portal does not mean that an athlete has to transfer. Instead, it allows the athlete to communicate with other schools but ultimately an athlete may decide to return to their original school.

While the May 1 deadline to enter the transfer portal and be eligible for the 2022-2023 season has passed, the NCAA does grant waivers to those rules, including when a program changes coaches. It is likely that McKeever being placed on a leave of absence pending investigation would qualify Ivey for a waiver.

Her 200 free time ranks her as the 9th-best performer of all-time.

Ivey has not raced since the 2022 NCAA Championships. That means skipping the US International Team Trials in April. She placed 12th in the 200 free semifinals at the 2021 US Olympic Trials in long course.

Ivey is originally from Gainsville, Florida and graduated from Buchholtz High School. She graduated early from Buchholtz in December 2018 and arrived on Cal’s campus a semester ahead of schedule – in January 2019. She was the SwimSwam #1 ranked recruit for the class of 2019.

Ivey told SwimSwam that because she graduated high school early she still has a few classes left before she is done with her Cal degree. She said she plans to graduate in December 2022 and is “exploring graduate programs with the intent of using my 5th-year eligibility.”

Athletes were allowed an extra year of eligibility due to COVID-19 during the 2020-2021 season.

Ivey also told SwimSwam that she is training this summer in Berkeley and is taking some summer classes.

Ivey joins a list of four Cal women who have entered the portal since the McKeever news broke. Other members include Lea Polonsky, Isabelle Stadden, Ayla Spitz, and Emma Davidson.

Hey Izzy,
Come on home (to Gainesville). City is much nicer than when you left, and its one of the best programs you can swim for while getting a top tier masters.
I’d if your heard of these peeps but we have a few pretty good free swimmers here including American Worlds team members: Ledecky, Hinds, Auld, Dressel, Finke, Smith, Freeman and Gravley.

I hope she goes to Texas and can be with drew finally, they are so cute together. Also that training group on both sides is fire.

How does that work? This would be her fifth year but she still has classes to complete at Cal. She takes class through Dec then transfers in January and competes Jan-NCAA for new program?
My guess is she goes to Florida. She gets a lot of academic support from her mom.

I think the choice is obvious…. She needs to come to Bloomington, Indiana to swim for Indiana University and my good friend, mentor and spiritual advisor, GOAT Coach Ray Looze! Izzy will attain unprecedented glory as an IU Hoosier!

She’d only reach 80% of her potential there

Here’s my early list of candidates for where she transfers:

1. Texas (for obvious reasons)
2. Florida (She’s from Gainesville so could just go back home)
3. Virginia (Can you imagine that IM training group if she went there?)
4. Stanford (Just across the bay, but the Stanford admissions process could complicate things)
5. Alabama (Have to have an out of the box option in here somewhere)

Why is it obvious?

She’s dating Drew Kibler (or was at one point).

Don’t see her going to Florida. Sprinter men doing good but still to be seen on the women from the collegiate side and Natalia Hinds has been a question mark compared to her year at Georgia

Ledecky just dropped a 1:53 relay split, think she would do just fine there

Which she has been doing for the last 5 years

What do you need to see from the college team? Did you not see that UF was projected to score next to nothing at NCAAs and outperformed their seed by 200+ percent to place 13th for their best finish since 2015, or that they secured the #1 recruit in the country in Bella Sims? Ivey would be a fantastic addition to a team that is about to rocket up in a big way. Plus if she has designs on Paris, she can train with Ledecky, Sims, and Hinds.

Best of luck in your future swimming endeavours, Ms. Ivey. It has been fun to watch you swim and improve. Feels bad to see it end like this. Looking fwd to see where you land.

I think Stanford has some pretty good grad programs!

Depends on what she wants to study

Stanford is a junior college.