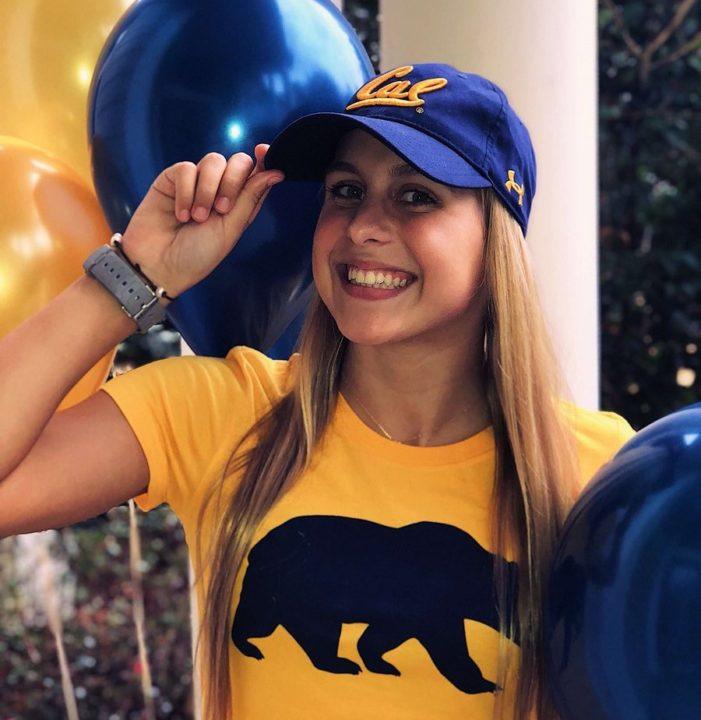 Isabel Ivey is moving to Berkeley on January 3, 2019 to join the Cal women’s swimming and diving team as a mid-season addition to the class of 2022. Archive photo via Isabel Ivey

Isabel Ivey, our #1 recruit in the high school class of 2019, signed a National Letter of Intent at Buchholz High School in Gainesville, Florida on Wednesday morning. She had declared back in January her intent to swim at the University of California, Berkeley in the class of 2023. This morning, however, we learned that Ivey plans to leave Buchholz in December and head to Berkeley on January 3, 2019 to join the women’s swimming and diving team as a mid-season addition to the class of 2022.

Did you know on top of all @BuchholzSwim’s successes, they also have the #1 swim recruit in the country on their roster? Buchholz’s Isabel Ivey just signed with the University of California at Berkeley. @CalWSwim is powerhouse program. She’ll be staring college early in January. pic.twitter.com/ojEtuSBcVM

All-American swimmer Isabel Ivey signs with Cal this morning at Buchholz, will start there in Berkeley on Jan. 3 pic.twitter.com/G4LuUgYm1D

Ivey is an incredibly well-rounded swimmer, one of the top in her class at all four strokes. Her SCY 200 free time would have landed her in the A final at 2018 NCAAs, and her 100 free and 200 IM times would have made the B finals. She should also be a strong addition to Cal’s relays, having the ability to slot in at several different legs on the medleys.

According to her mom, Cal coach Teri McKeever called up this summer asking if Ivey would be able to graduate high school early and join the team in the spring to bolster the team’s NCAA squad. Her arrival on the Bears’ roster in January will help soften the blow of Kathleen Baker’s decision to turn pro and forego her senior season at Cal. Baker made that announcement just after Phillips 66 Nationals in August.

Since recently listening to a podcast about the life of Aaron Hernandez (including his early matriculation at Florida), this headline made me gasp.

Does anyone know what this does to her eligibility?

It uses her year

Actually only a semester-athletes have 5 years to compete 4 years of eligibility.

Really? If that’s the case this is a pretty sweet deal for Ivey. Gets to finish high school early and get 5 NCAA meets. I’m assuming she’d have to red shirt a semester at some point.

Is this actually true? I feel like more swimmers would have done this if you could loophole your way into 5 NCAA meets.

You cannot. For 2-semester sports, you basically then just get 3.5 seasons. It’s different in one semester sports. Volleyball players, for example, who get to campus early can’t play the spring exhibition season after their senior year.

you only get 4 championship.

This is great for the Bears.
Playing Devils Advocate.. What if she doesn’t adapt well to Teri’s training right away and in time for NCAAs in March, and doesn’t perform well. She has then used a year of eligibility already.
I am not questioning Teri’s coaching, but even the best swimmers don’t immediately mold into the programs training right away, sometimes takes longer than 4 months to do so.
Just a thought

I don’t like the look of this at all. If this decision came from her, awesome. But the college coach calling to ask her to leave high school early? Just for some NCAA points? How is she supposed to say no in this situation?

McKeever just basically made Ivey give up her entire end of high school, and forced her into college a year early. No graduation, no senior prom, 9 months of maturation before college lost. I really hope this doesn’t affect Ivey in the long run. And if it was just scholarship money becoming available, I don’t think that’s better, or explains it. Because I assume the #1 recruit in the country already had a full ride,… Read more »

You’re making a lot of assumptions here. If McKeever did pressure her to leave school early I agree that’s wrong. But for Ivey to graduate early she’d Have to be considering doing so since at least last year as to make sure she finished all her credits, etc. the fact that Ivey switched clubs in the last year might indicate that she is bored/ unhappy with her current training and wanted some changes. I wouldn’t necessarily want to miss my first semester of college, but personally senior year of HS wasn’t all it’s cracked up to be- college was a A LOT more fun. If Cal has the money for her and she’s ready to get a head start on… Read more »

“According to her mom, Cal coach Teri McKeever called up this summer asking if Ivey would be able to graduate high school early and join the team in the spring to bolster the team’s NCAA squad.”

That sounds a lot like the Iveys had no plans until it was “suggested” this summer. Look, I’m happy for her, and if its truly the right decision, then fantastic. But I think McKeever even calling to suggest it would count as “pressuring” her. Put yourself in her shoes. You’re the #1 recruit in the country, and the coach of the #2 team in the country (your future coach) asks you to leave high school early and replace Baker. How many kids in that… Read more »

Proof of your accusation?

It was not my intention to make any assumptions, or accusations. I am just going off the article, and my recent experiences as a confused high school senior.

“According to her mom, Cal coach Teri McKeever called up this summer asking if Ivey would be able to graduate high school early and join the team in the spring to bolster the team’s NCAA squad.”

This is literally McKeever “pressuring her to leave school early”. Even if she only suggested it to Ivey, or said it was an option, if one of the most well-known female swim coaches in the country asked her to come to school early, she would have a very hard time saying no. And if she… Read more »

Again, no proof. First you say that Teri’s pressuring her then say maybe not.

I checked Webster-that’s not the definition 😎. According to her Mom is heresy-lets all make sure this is a fact. If the coach did call maybe she just offered it and let the family decide.

I think dmacncheez was just quoting the article. It states that the coach contacted the family over the summer – right in the article, based on an interview given by the athlete’s mother. Not sure why you keep saying no proof.?

You have good points. I wish her all the best but I feel terrible that she Will be missing out on the traditional transition of becoming a college freshman with her original class she was supposed to be in. So many bonding experiences happen that she will not get to experience ever. I just really hope this was her decision.

You do realize that she does her education on-line…..

This benefits Cal coach McKeever. Huge upside for McKeever, potential downside for this swimmer. Actually, how could this young swimmer say no to McKeever? Recruiting tactics, manipulation are powerful tools of control. I hope this swimmer and her parents enter this new arrangement with eyes wide open and see that Baker going pro and dumping her Cal team changed the course of Ivey’s swim and college experience. Hmmmmmm. Entering a hornet’s nest.

Her father is the former head coach at the University of Florida. I’m not sure, given his circumstances (he’s now banned for life by USA Swimming), how much involvement he had in this process, but if he is still in Isabel’s life, seems like they probably know what they’re getting into.

Chloe Clark will be joining early as well! GO BEARS!!

Very unusual. Maybe she wants extra more than a season to adjust to Cal pre-Olympic Trials?

Unusual in swimming, less unusual in other sports. My guess: when Baker decided to go pro, Cal had a lot of scholarship money open up, and needed to find some points.

I totally forgot how versatile she is. 52 in fly/back, 1:00 in breast is really fantastic for someone you might initially think of as a 200 freestyler. At any rate, she should be REALLY helpful on free relays and another individual scorer to help Cal shore up their shot at finishing no lower than 2nd at NCAAs.