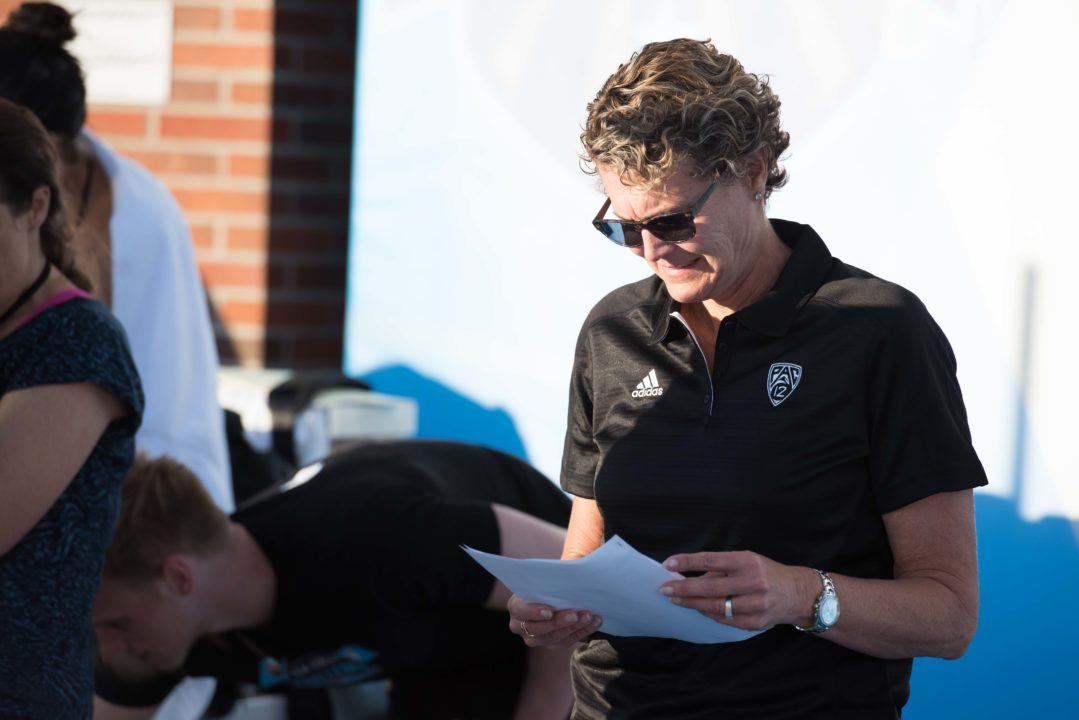 Cal has placed longtime women’s swimming & diving head coach Teri McKeever on administrative leave following explosive allegations of verbal and emotional abuse by current and former athletes on Tuesday. The Orange County Register published a report following a South California News Group investigation which found that at least six Cal athletes have contemplated suicide since 2018 due to the alleged abusive behavior by McKeever.

At around 5:00 P.M. Pacific Time on Wednesday evening, Cal issued a statement in which Athletic Director Jim Knowlton revealed McKeever has been placed on administrative leave. The move came after Knowlton held a meeting with the members of the swim and dive team in which he informed them of the decision. “As reported, these allegations run counter to our core values and the expectations we have for every member of our department. As the person entrusted with the well-being of more than 1,000 student-athletes, coaches and staff, I have no greater responsibility than ensuring we do the right things in the right way,” said Knowlton in part. He would also go on to say the Athletic Department intends to reply to “everyone” who reaches out, and they are making resources available to members of the program who are in need.

That SCNG report found nineteen current and former Golden Bears swimmers, six parents, and a member of the men’s swim & dive team who allege that McKeever has been verbally and emotionally abusing her athletes “for decades.” The allegations of abuse made by these athletes range from name-calling and swearing at the swimmers (“lazy”, “worthless”, etc.) all the way to calling a swimmer, Danielle Carter, “pathetic” after learning of an incident in which Carter contemplated committing suicide.

Following the publication of the report on Tuesday, “a majority” of Cal swimmers walked out of practice on Wednesday morning.  According to the Orange County Register, who say they spoke with four people familiar with the situation, the swimmers were told they were having a team meeting Wednesday morning. Allegedly, when the swimmers showed up, McKeever asked if they were “ready to swim,” then read a “basic” statement. After that, OCR reporter Scott Reid says “a majority” walked out of the practice.

The Orange County Register is reporting that McKeever is under investigation by the U.S. Center for SafeSport, according to emails they have obtained.

McKeever has served as the head coach of the Cal women’s team for the past 29 seasons, and has served as the U.S. Olympic Team head coach in 2012 and has been a member of Team USA coaching staffs for 2 other Olympic Games, as well as 7 World Championships. She’s regarded by many as the most accomplished female coach in swimming history.

With McKeever on leave, newly-hired assistant coach Jesse Moore will likely have to serve as the interim head coach of the women’s team. Moore was hired in mid-April, and therefore has only been on campus with the Golden Bears for a few weeks. Moore is the only other swim coach besides McKeever currently on staff for the women’s program.

The Cal AD is incompetent and an elitist looking down on the athletes, not just swimmers.. Needs to be fired just like McKeever will be. Should ax their fat retirement benefits, a pity that won’t happen.

Gotta love euphemisms. “Administrative leave” is PC for “holy crap!, we are screwed if we keep you around, stay away from us while we do major damage control to not piss our alumni and donors off and scare away money”

I think the definition of “great coach” is certainly being put into question here today. And that brings up another question. – which coaches actually fall into this category based on their own athletes’ opinions – not based on titles or numbers or their own egos!

Just curious….. How are the team “Captain’s” chosen at Cal…. When the coaches have complete control over the who is captain does the team lose their “collective voice”. It would be one more way for a college coach to exert complete control when they make the choice of captain…..

The team votes on captains BUT Teri has final say and can change or add it.

Wonder what Missy Franklin & Natalie Coughlin have to say about this?

I have heard the AD met with the swimmers today and told the swimmers that they needed to PROTECT themselves AND TERI. He told them HE was really distressed. Never once said we have your back and support you and never once asked how THEY were doing. If true it appears he insinuated that TERI was the victim and the team should rally behind her. If accurate, the whole crew seems to be looking for the broom and lip of the carpet.

If, and that is if, this is in fact true, the student-athletes should not be meeting with anyone again without a lawyer present. My child would be on the next flight out.

SafeSport investigating. Will they put her on the suspended list?

I wouldn’t be shocked. This is right up their alley — a high profile case where someone else already did most of the investigating for them.