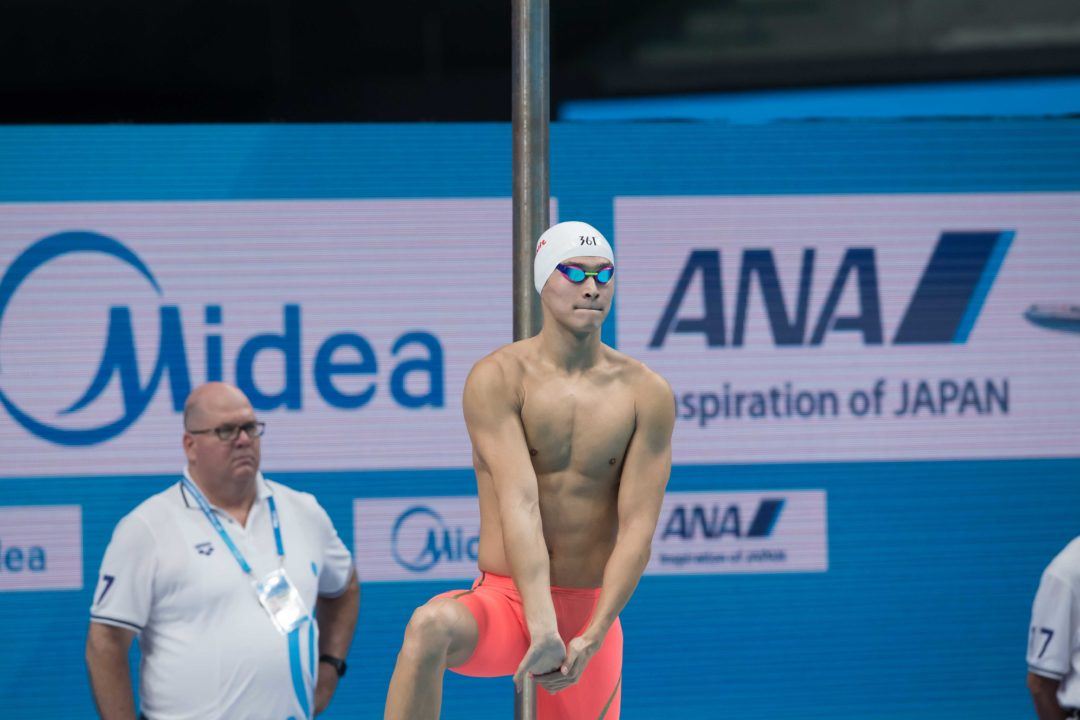 Check out a preview for finals at the World Championships. Current photo via Mike Lewis/Ola Vista Photography

After a fast and exciting opening preliminary session, the first finals session of the 2017 World Championships is upon us.

Leading us off will be the men’s 400 free, where Austrian Felix Auboeck is the surprising top seed after setting a massive national record in the prelims at 3:44.19. He’ll be alongside the defending champion Sun Yang who wasn’t far behind this morning in 3:44.55.

Italian Gabriele Detti, who is the 2nd fastest man in the world this year, will be out in lane 1, while reigning Olympic champ Mack Horton will swim in lane 2 and former Olympic and World Champion Park Tae Hwan will swim from lane 6. If this race comes down to the final sprint, Auboeck (26.80) and Sun (26.94) were the best coming home this morning.

Next up we’ll have the world record on watch in the women’s 100 fly, as Sarah Sjostrom easily stormed to the top time of the morning in 55.96, under world record pace at the 50. Her world record stands at 55.48 from Rio.

American Kelsi Worrell also had an impressive morning swim, moving to #5 on the all-time performers list with a best time of 56.44. Worrell will swim alongside Japanese star Rikako Ikee in the first semi, and Sjostrom will be joined by Australian Emma McKeon and 2016 silver medalist Penny Oleksiak in the second semi.

Andriy Govorov headlines the second semi after throwing down a time of 22.92 in prelims, while Joseph Schooling (23.05) will have lane 5 after lowering his own Asian Record this morning. World #1 Nicholas Santos (23.24) will swim in lane 3.

We’ll have another world record on watch in the women’s 400 free after Katie Ledecky lowered her meet record this morning in an easy 3:59.06. Leah Smith is the clear favorite for silver qualifying in 4:02.00, while 16-year-old Australian Ariarne Titmus searches for a medal after breaking her own age group Aussie Record in the morning for the 3rd seed (4:04.26).

In the men’s 100 breast we’ll see Adam Peaty back in action after cruising to the top seed in 58.21. Assuming he goes sub-58.46, he’ll own the ten fastest swims in history after this session. The meet record of 58.18 will likely go, and the world record of 57.13 will be on watch come the final.

Americans Cody Miller and Kevin Cordes have to now be considered the favorites for silver and bronze after Cameron van der Burgh was a no-show for his heat.

Hometown favorite Katinka Hosszu impressed in the 200 IM heats this morning in a time of 2:07.49, less than a second and a half off her world record. She’ll be joined by Americans Madisyn Cox and Melanie Margalis in the second semi, while the first one includes Canadian Sydney Pickrem (2:10.14) and British duo Siobhan O’Connor (2:10.42) and Hannah Miley (2:11.32).

There were no surprises in relay qualifying this morning, with all of the usual suspects advancing to the final. Brazil will have lane 4 in the men’s final, surrounded by Australia and the US. Based off prelim splits, Townley Haas (47.60) will join Nathan Adrian and Caeleb Dressel for the Americans in the final. The fourth member is up in the air, as Blake Pieroni (48.40) on the lead-off and Zach Apple (48.16) were both solid this morning.

Mallory Comerford sizzled to a 52.47 anchor leg, and Kelsi Worrell split 53.27. That will move those two into the final alongside Simone Manuel. The final spot is up in the air. Katie Ledecky was splitting 52s in Rio so she could go, and if not it will likely go to Lia Neal who led-off in 53.94 in prelims.

The Canadians will move in Penny Oleksiak and Chantal van Landeghem, likely for Michelle Toro and Rebecca Smith, which moves them into medal contention. Emma McKeon will join the Australians, while Bronte Campbell‘s status is up in the air.

Relay lineups will be announced soon.

I really enjoy the world Swimming Championship; especially since the Americans are doing so well.. There is the changing of the guards. Many of the older swimmers within the past several years are retiring, but fear not; because we have a crop of very good swimmers ready to take their places…It is exciting to watch because several world records have been challenged or broken.
Comment or question! These are the WORDS MEETS and why isn’t the meet televised @ prime time on one of the major stations?

Keep up the good work.

somebody thinks that Horton may hide his game ? in conference he spoke about swimming against clock tonight
and would he speak about Sun if he knew that he missed his taper ?

any updates on maddie groves’ suspension?

I think the mens 400 free should be great. Sun is the favorite, but last year Horton proved suns final sprint can be beat. Detti shouod be in contention, and who knows, maybe Auboeck will pull a huge upset. He does have a great kick, which is perfect for what this race is shaping up to be, a tatical affair.
The womens 100 fly semis should be great. WR watch should be out on Sjostrom, but I am curios to see how Worell follows up that prelim swim, and It wilp be interesting to see if Olseiak, Ikee, or McKeon make a statment heading into the final after that ridiculously fast prelim.
The Course record is under threat… Read more »

i love seing new line -ups …..great to watch what they will do tonight

There would be a record by American girls.
American record – for sure.
Championships record – most likely
World record – very close.

oh i think Ledecky is able to throw Sub-53s and the coaches have faith in her ! Putting her in the third leg is a smart decision! Ledecky just needs to go around 3:58 to win 400 free, i don’t think she will go hard on the world record for 400 free this time:D

No way. Ledecky is a racer, she doesn’t have it in her to only give 90% when she has a shot at the WR again.

Any news who will swim American women relay? For some reason Neal was slow. Worrall looks to be in great shape. Will Ledecky swim relay?

The omega timing site has the names of who will swim in the relay legs – http://www.omegatiming.com/Competition?id=000111010AFFFFFFFFFFFFFFFFFFFFFF&day=1

Bronte Campbell listed for Aus and the Danish team made it in – thought they finished lower than 8th?

she is clutch ….and a great relay swimmer