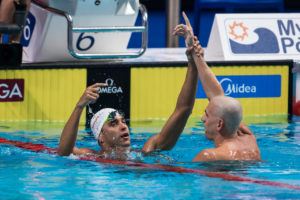 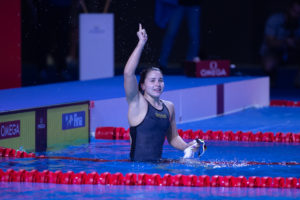 Teenage Ajna Kesely followed up her 800m free silver from Glasgow with a national record in the 1500m free at Hungarian SC Championships.

Laszlo Cseh
Laszlo Cseh is a Hungarian swimmer and Olympic medalist. Born Dec. 3, 1985 in Hungaray, Cseh began swimming at an early age. Although born in Budapest, Cseh was raised in Halásztelek, Hungary. A pretty versatile swimmer, Cseh has held European Records in the 200-meter butterfly and the individual medley events. He also held the Hungarian Records in the 200-meter backstroke, 200-meter freestyle and the 100-meter backstroke.

Athens Olympics
Cseh was selected to the 2004 Hungarian Olympic Team, which were held in Athens, Greece. There he competed in the same events that he advanced to the championship final in of the 2003 World Championships — 400 IM, 200 IM and the 100 backstroke. While in Olympic training camp, Cseh actually suffered an ankle injury, but when it came to competition, the didn’t hold him back. Cseh won his first Olympic medal when he won a bronze medal in the 400 IM. He nearly missed the medal podium with a fourth-place finish in the 200 IM, and he also finished sixth overall in the 100 back.

2005-2007
In the following years of the 2004 Olympics, Cseh faced some ups and downs in the pool. His first major competition was the 2005 World Championships, where he was set to face American frontrunner Michael Phelps, but when Phelps chose to not swim the 400 IM, Cseh picked up his first gold medal in the World Championships. At the 2007 World Championships, Cseh didn’t back up his gold-medal win from 2005, but he did still advance to the final in the 400 IM. Cseh also set a new National Record in the 200 IM, and competed in the 200 free, which was an event in early progress.

2008 Olympics
Right out around and before 2008 the world began to see major progress in Cseh’s butterfly. At the 2008 Olympics, he represented Hungary swimming the 400 IM, 200 butterfly and the 200 IM. Although Cseh did some serious damage to the European Record in all three individual events, he was up against Phelps who won a stunning eight gold medals. Cseh racked up three more silver medals in 2008, to add to his Olympic resume.

More international competition
At the 2009 World Championships in Rome, Cseh came down with a stomach virus, and had to take electrolytes due to dehydration. After scratching his first event, the 200 fly, and still very sick, Cseh came back to finish second in the 200 IM in a new European Record, and take home a bronze in the 400 IM.

In 2010 we saw Cseh dominate the European Championships, winning the 400 IM for the fourth straight year and the 200 IM for the third time. The following year Cseh travelled to Shanghai for the World Championships, where he began to switch his focus from the mid-distance IM events to the butterfly races. In Shanghai Cseh picked up a bronze in the 200 IM, and finished ninth in the 100 fly and 13th in the 200 fly.

2012 Olympics
Competing in his third Olympic Games, Cseh had a huge event lineup going into London — the 200 fly, 400 IM, 200 IM, and three relays. In the 400 IM Cseh just missed making the championship final when he finished ninth in the semi’s. And although he only finished 12th in the 200 fly, missing another championship final, he added to his list of Olympic medals in the 200 IM with a bronze medal behind Phelps and Ryan Lochte.

At the 2013 World Championships in Barcelona, it seemed that Cseh was beginning to focus on shorter events in favor of the 400 IM. Going into the 100 fly, Cseh’s best finish in Barcelona was a fifth-place in the 200 IM. Cseh finished second behind Chad le Clos, to take home a silver medal. He didn’t have many expectations in the 100 fly considering that his best time was from 2012, and he was ranked just 31st in the world going into the event.

In December of 2013 Cseh swam at the Hungarian University Nationals. He began the meet by finishing second three straight times even swimming events like the 100 breast. But in a short amount of time, the multi-time Olympic medalist won three consecutive gold medals and joined his team for a relay.

Riding the world rankings
After Cseh began taking in events with shorter distances, and he also started a movement to change Hungarian’s philosophy on swimming, the swimming world continually saw his improvement in the 200 fly. At the Budapest Open in 2014, Cseh not only won the 100 fly, but he took the title in the 200 fly. His time, which was just under 1:57, put him at no. nine in the world rankings. Going into the 2015 World Championships Cseh was gearing up at the 2015 Hungarian National Championships. Without rest, he competed in the 200 fly, and wasn’t able to finish the race as strong as he would when rested. At this point in the year Cseh was ranked no. two in the world, behind Michael Phelps.

At the 2015 World Championships in Kazan, Cseh was vying for a world title especially with Phelps out of the picture due to suspension. Cseh impressed in the 100 fly, when he finished second to le Clos — his time was his first sub-51 second swim since 2012. Not only that, but he also set a new National Record. With loads of confidence behind him, Cseh was once again up against le Clos going into the 200 fly. He took the first 100 meters out strong, but his third 50 meters was dominant, where he took over the lead from le Clos. Cseh touched the wall first, setting a new National Record and winning his first World Championship title in 10 years.

After the disappointment of missing out on the medals in the 200 meter butterfly, he finally made it on the podium in the 100. But he did have to share the silver medal position with two other swimmers. Michael Phelps and Chad le Clos. Cseh turned third fastest behind Joeseph Schooling of Singapore and Russia’s Aleksandr Sadovnikov. On the final 50, Cseh moved up the field by one, but so did Phelps and Chad le Clos. The gold was secure for Schooling, who’s lead grew down the final stretch. But the touch couldn’t separate the long-time butterfly rivals. Cseh, Phelps and le Clos all touched for silver in 51.14.

Earlier in the week, Cseh finished 7th in the 200 meter butterfly in 1:56.24. At the halfway mark he turned second behind Phelps, but tightened up on the back half to drop down the field.

Cseh was in front of a home crowd for his eighth World Championships. Again he was up against Le Clos in the 200 meter butterfly but this time he wasn’t able to beat him to the gold. Le Clos went out like a rocket and was a body length ahead of Cseh and the rest of the field by half way. But as Le Clos started to fade Cseh took advantage and started to catch up. He made up a huge distance but it wasn’t enough. Cseh took the silver in 1:53.72.