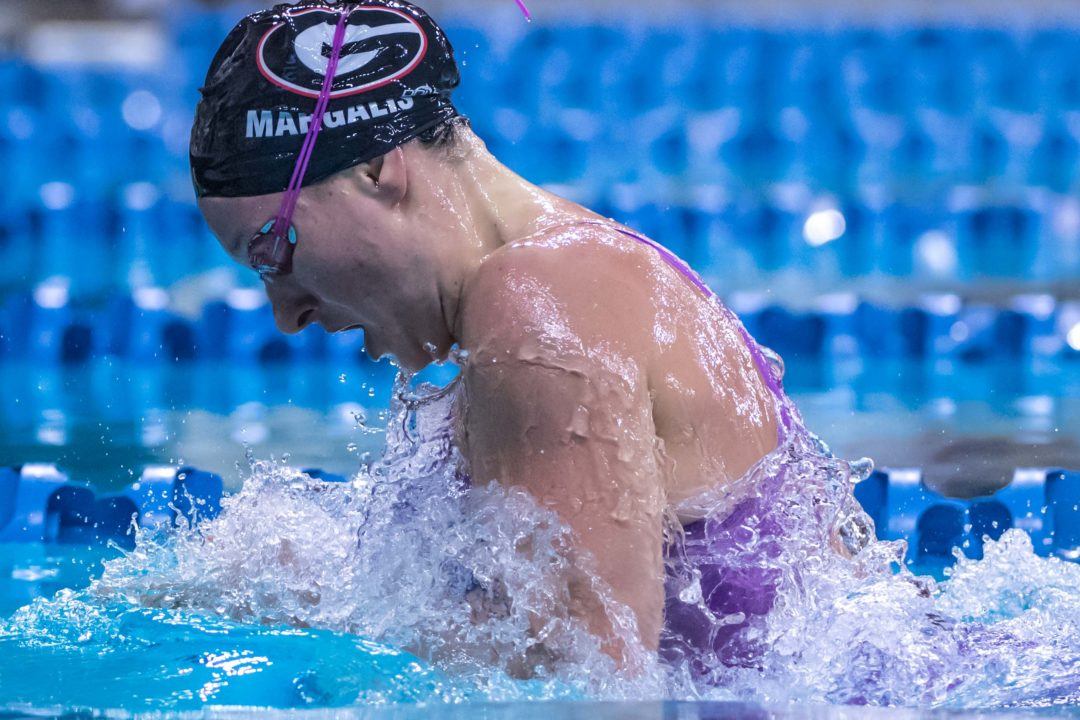 The race for 2nd in the 200 IM has been blown open in light of recent events, but Olympic medalist Melanie Margalis remains the heavy favorite. Archive photo via Mike Lewis/Ola Vista Photography

The race for 2nd in the 200 IM has been blown open in light of recent events, but Olympic medalist Melanie Margalis remains the heavy favorite. She’s over a second faster than any American so far this year in 2:10.26, and her biggest competitors are either out of the meet or facing some challenges going into this week. Margalis went her lifetime best 2:08.70 at last summer’s Worlds and continues to improve in the IMs with a lifetime best 400 IM already this season.

After a stellar NCAA season that saw her smash the American Records in the IMs, Stanford’s Ella Eastin (2:10.54) is a bit of a question mark here after falling ill with mononucleosis. For the sake of consistency, we’ve left her out of our picks for now, since she may miss the meet altogether. However, an Eastin at even 80% is certainly a top-8 threat. Coupled with Madisyn Cox‘s (2:09.69) 2-year suspension, the Americans are now without their 2nd and 3rd seeds

This may be a good chance for Kathleen Baker to step up and take on the IM internationally. Baker, the 2017 NCAA 200 IM champion, is more widely known for her backstroke talents. However, she’s also the 2nd fastest American in the nation this year with a 2:11.58 from the Mare Nostrum in Barcelona. That was her first time breaking 2:12 and her first best time in the event since 2015. With rest, it wouldn’t be surprising to see her go 2:10 or better.

Baker and Margalis are the only active American swimmers to have cleared 2:12 since Rio (not including Eastin or Cox), but we have quite a few swimmers bunched into the 2:12-range after that, making the race for Pan Pacs potentially very close. Bethany Galat (2:12.13) and Alex Walsh (2:12.36) are among the top threats having been 2:12-low. Walsh has been just over a second shy of that with a 2:13.60 this season and went a lifetime best short course 200 IM in December to set a new 15-16 NAG Record. Galat has been consistently in the 2:12 range since 2015, when she set her lifetime best, but has been a few tenths shy of that in recent summers. She’ll need to be right at her best or better if she wants to compete for a top-4 spot.

Though she hasn’t broken 2:16 since 2016, Tennessee’s Meghan Small has a lifetime best of 2:11.26 from the 2015 Pan American Games. Her fastest time since 2016 has been the 2:16.00 she swam at the TNAQ Invite last month. Small has shown improvements in her short course IM over the last couple of seasons at Tennessee, so she’ll be competing for a top 2 spot if those improvements show in long course and she gets back to her best.

Eastin said she would compete despite being down with Mono so I’m confused why she’s being left out.

Who knows what could happen in prelims

My understanding is that she’s taking it one session at a time. We have no idea how she’ll feel by that last day of the meet. If she’s already qualified in the 200 fly, for example, it may be better for her to rest instead of loading up a full schedule. That’s why I mentioned in the article that it was only for the sake of consistency. We can’t say for sure if she’ll be swimming that day, and at the time of her announcement it sounded like she might miss the meet completely, so we’ve mentioned her and given her credit as a top swimmer but left her out of the picks since we weren’t sure she’d be swimming… Read more »

I really hope Eastin can pull through