Ella Eastin Comes Down with Mononucleosis; May Miss Nationals 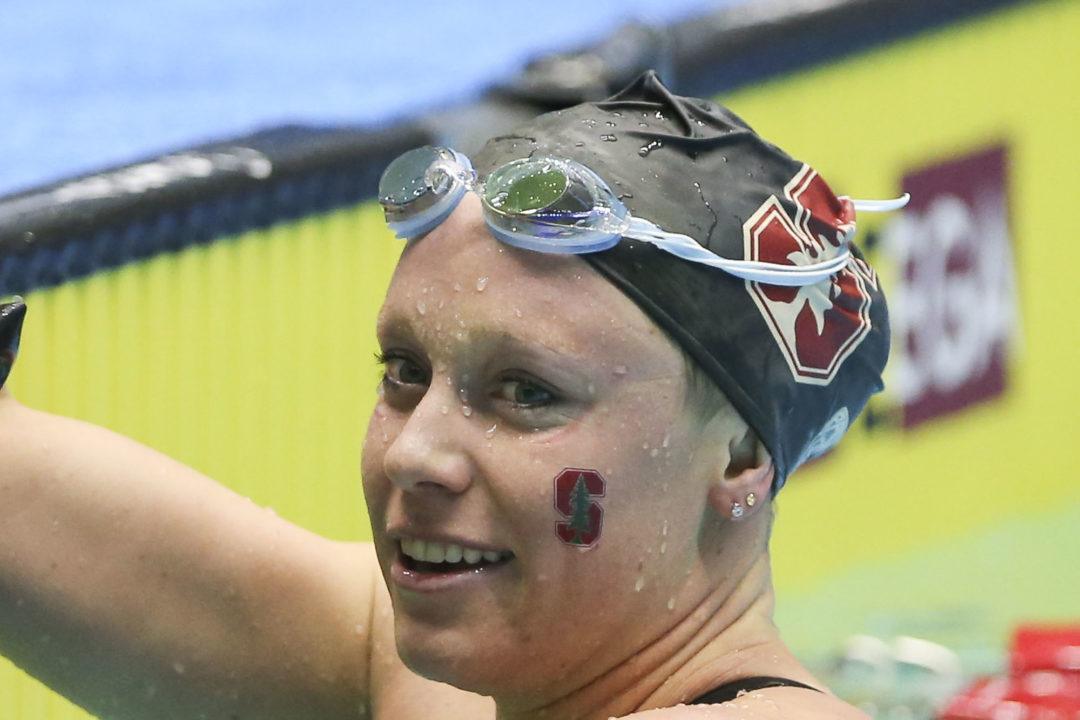 7-time NCAA Champion and American Record-holder Ella Eastin has told SwimSwam she may not swim at Nationals this summer, owing to a Mononucleosis diagnosis that has kept her out of the water for the last two weeks. Current photo via Tim Binning/TheSwimPictures.com

7-time NCAA Champion and American Record-holder Ella Eastin has told SwimSwam she may not swim at Nationals this summer, owing to a Mononucleosis diagnosis that has kept her out of the water for the last two weeks. “The weekend after SMOC I wasn’t feeling well. I was achy and felt like I had the flu. The weather was changing -it was getting hot- and I thought I was dehydrated. On Monday [July 2] I went to the see my doctor. They did a blood test and it came back positive for Mono.” Mononucleosis is an infectious disease caused by the Epstein-Barr virus (EBV). It can cause problems with the liver and the spleen.

Eastin did absolutely nothing for the first 8 days of convalescence. She tried to swim a little on each of the next two days, but she could feel that she wasn’t ready, so she stayed away from the water for 3 more days. Eastin explained she has been cautious not to do anything to risk her long-term recovery. “I had to be careful because with an enlarged spleen there is an extreme risk of rupture. So even if I did swim I had to make sure there was no chance that I would get hit or get my heart rate up really at all.”

Eastin’s entire training regimen this spring has been geared toward preparing the mid-distance events for which she is known: 200 fly, 200 free, 200 IM, and 400 IM. Events “that require both strength and endurance,” she noted wryly.

“After having an … interesting… season last summer with things not going as I’d hoped with the disqualification [after finishing second in the 400 IM at World Championship Trials], then turning things around with the help of my Stanford teammates and having a great NCAAs, I was excited to push myself forward and prove myself at Nationals this summer.

“It’s never easy to deal with an illness but it’s been especially disappointing to have to manage this with such a big meet coming up. I can’t control what I do physically because of safety precautions and doctors’ orders. I have to sit around -and I’m terrible at sitting around.

“I hope I’ll be able to swim at Nationals, but I honestly don’t know yet. There is a reason for everything. In the bigger picture, I’ll be fine. But the timing is frustrating. That this meet determines what I’ll be doing the rest of this summer, as well as next summer, it’s just frustrating.”

Eastin’s coach, Greg Meehan, the Paul A. Violich Director of Women’s Swimming at Stanford, said, “Clearly, this is a really tough break and we all feel for Ella. Not too much to do at this point other than taking it day-to-day and focusing on what she can control, with the hope she might feel well enough in 8 days to race. Either way, she has had the best year of training in her life and that will carry her forward.”

Eastin is a rising senior at Stanford. She currently holds the American Records in the 200-yard butterfly (1:49.51), the 200-yard IM (1:50.67), and the 400-yard IM (3:54.60), all achieved during her junior season with the Cardinal. She also holds the American Record in the 800-yard freestyle relay with her 2017 Stanford teammates Simone Manuel, Lia Neal, and Katie Ledecky. She won all three of her individual events (200 IM, 200 fly, and 400 IM) at the 2018 NCAA Championships and earned Swimmer of the Meet honors. Last summer, Eastin touched second in the 400 IM at the Phillips 66 National Championships & World Championship Trials only to be disqualified for the “Lochte Rule” moments later. She was third in the 200 IM and fourth in the 200 fly at Trials, thus missing out on competing at World Championships in Budapest. Eastin did represent the United States at World University Games, garnering a gold medal in the 200 fly, a silver in the 200 IM, and a silver in the 4×200 free relay.

It seems her entire International career may revolve around the quality of 3-4 races in Omaha in July, 2020.

If anyone could come back from this it’s Ella. She is a real role model, and always positive. You got this!

Just thought I’d mention for everyone that’s still upset about her “unfair” disqualification from last summer, you can clearly see at 6:55 on the race video that Ella touches the wall on her front on the backstroke to breaststroke transition, an obvious DQ. The officials never called it… https://www.youtube.com/watch?v=fc072jtCiD4

I wonder if they’ll be strategic and either have her swim 200 fly and push it hard on the first day to secure qualifying, or maybe wait until the last day to swim 200 IM to give her more recovery time. I hope she heals up soon!

Tough break for Ella….hopefully if she can compete but is not at 100%, she can just swim the 200free to qualify for that relay and then swim whatever she wants at panpacs.

FYI: The #4 in 200 free currently is Melanie Margalis with 1:57.49
And it will most likely stay this way. It is not easy this season to get on this relay.

Mono destroys you. Like you are beyond useless with mono. Also lymes really depletes you too. Had both in my days as a swimmer.

12
0
Reply
Yozhik
Reply to  Swimmer A

What a bouquet you had. I won’t wish it even to my enemy.

Get well, study hard, and get ready to knock it out of the park at Trials!!