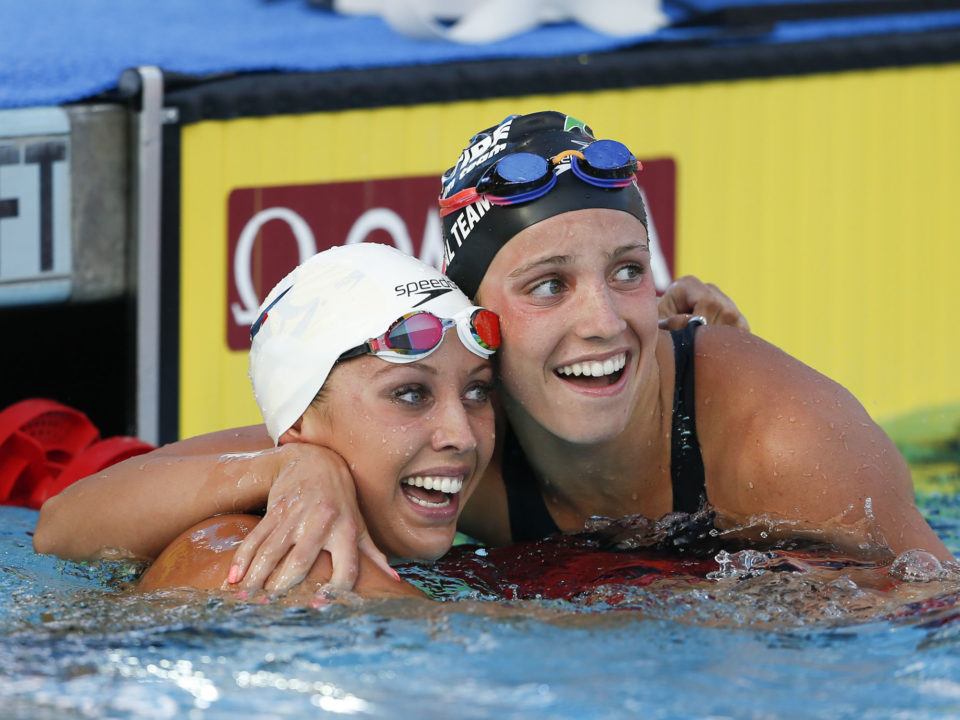 Robert Gibbs contributed to this report.

And we just plain don’t know which are which.

However, last week’s U.S. Nationals did provide some of the highest drama you’ll ever see in the sport, along with some of the finest swimming of a season that will still include the Pan Pacific Championships, European Championships and Asian Games. We’ve deliberated over our official awards ballot and settled on winners. Without further ado:

Baker tied Katie Ledecky to lead all women with three individual wins in Irvine. She also set the meet’s only world record, a smashing 58.00 in the 100 back that both won a historically-brilliant race and set up the U.S. women’s medley relay for continued world dominance.

The much-discussed Andrew finally put together the breakthrough meet critics had been looking for. He led all swimmers with 4 event titles in Irvine, even topping superstar Caeleb Dressel head-to-head in two of their three A final meetings. Andrew succeeded across all four strokes in the 50- and 100-meter distances and showed serious Pan Pacs medal potential.

Picked by some to perhaps lose her American backstroke crown to youngster Regan Smith, Baker proved herself among the greatest backstrokers on the planet, blasting a world record 58.00 to win the women’s 100 back. She won that race by a commanding seven tenths of a second over what might have been the most loaded event field of the meet – more on that below.

Grothe had looked a little off earlier in the week, but managed to save his best swim for last.  He kept up a strong tempo the whole way, negative splitting the swim and registering the 3rd-fastest time ever by an American. He also leads the current world ranks in an event where the U.S. hasn’t been a power recently.

It’s been a Baker-centric awards ballot on the women’s side, but how can you downplay the 100 back final as a race? The event produced 4 times within the top 7 in the world this season (#1, #4, #5, #7), including a world record and a world junior record.

A tightly-packed final field featuring three Olympians (Cordes, Miller, Prenot), another former World Champs team member (Fink), a short course American record-holder (Licon) and the top three were none of them. The 100 breast marked the zenith of Michael Andrew‘s national-level breakout party, earning his first official Pan Pacs roster spot and very likely his first long course World Championships roster spot. The storylines are too many to count: Andrew Wilson representing the NCAA’s Division III at unprecedented levels, Devon Nowicki‘s return from anonymity to the nation’s top tier, sprint-oriented Michael Andrew coming from 5th place to 1st in the final 50, and (if we can count it) a swim-off for a World University Games spot.

McHugh, who swims for Penn State, has been lurking at the top levels of the US distance scene for a while now, but broke out here in a big way with a win in the 400 IM that moves her up to 3rd in the world this year. We talked about how few people predicted her 400 IM title above. It’s not without reason: McHugh bettered her lifetime-best by 5.4 seconds over the course of the meet and also dropped 6 in the 800 free and nearly 14 in the 1500.

How can you forget the underdog Wright coming back from the middle of the pack over the final 50 meters to upset a star-studded field (Kalisz, Conger, Shields) and book his first Pan Pacs trip? Coming in the second event of the entire meet, Wright’s 200 fly set the tone for what would become a meet defined by breakout swimmers making their marks on USA Swimming at the expense of established stars.

In a slew of great junior performances, it’s hard to pick against Smith, who won a co-national title in the 200 back, broke a world junior record in the 100 back, made senior Pan Pacs in the 200 fly and is in line for a return trip to senior Worlds in 2019. The 16-year-old is already making a major name for herself in a long line of incredible American juniors in the women’s backstrokes.

18-year-old Jack Levant made a pair of A finals and put himself in line for a potential 2019 World Championships relay spot, at least for the time being. Levant was 8th in the 200 fly (after taking 3rd in prelims) and 5th in the 200 free. He was within a eight tenths of a second of a national title in the latter race, and should get a prelims relay swim at the 2019 World Championships unless two members of the Pan Pacs team can better his time next week.

Team of the Meet – California Aquatics

When you add in the Cal Aquatics women (Katie McLaughlin and Abbey Weitzeil to the Pan Pacs team and likely World Championships team) and the Cal Aquatics roster had by far the most high-profile meet of any club in attendance.

The men’s 400 Free should at least be an honorable mention for race of the meet.. Grant Shoults and Zane Grothe just battled from start to finish, and Shoults’ last underwater turn was just phenomenal

Time wise it was one of the dullest events though

The California swimmers were on home territory. They did not have a time change to deal with and were used to the hot weather.

Andrew Seliskar got his breakthrough swim, but it was in the freestyle, not his usual events of the fly, breast, or IM. I think his coaches sensed an opportunity there, and he made the most of it.

You’d be surprised…. Theres a pretty solid difference between SF Bay Area and So Cal. Nor Cal swimmers definitely not used to high 80s+ temps and hot pools.

If you go by being able to deal with hot weather, half of the teams there should have done well–teams from Florida, Texas, Arizona, Georgia, Louisiana, etc. Weather in those states is closer to the heat in SoCal than NorCal.

Seconded – wondering if there was a reason for this or if it was an oversight?

no because Levant does as well

The honorable mentions list for junior swimmers could have been endless. 15 y/o Phoebe Bacon. Katherine Berkoff. The Walsh sisters. Lost in the shuffle a bit has been 15 y/o Mariah Denigan. Dare Rose and Magahey.

Baker’s 200 IM was just over 2 seconds off the world and American records, not within 2 tenths. And Zane’s 800 free was the 4th-fastest time ever by an American, not the 2nd-fastest.

Baker’s 200 IM is definitely up there in textile. Not very many women have broken 2:08 without a rubber suit. Hosszu, O’Connor (her 2:06.8 is extremely underrated IMO) and Ye Shiwen are the only ones I can think of.

A little more research and I found Yui Ohashi went 2:07.9 last year. As best I can tell, however, Baker has the American record (in textile).

Lol I was typing out a comment about how I was certain that Natalie Coughlin had gone a 2:09 as well, then I realized that her married name is Natalie Hall.

The only other woman to have broken 2:08 in textile is Yui Ohashi.
Surprisingly (to me at least), only 3 women broke 2:08 in 2009 (Kukors, Stephanie Rice, and Hosszu). So only 6 women have ever done it.
Baker sits tied 8th all-time.

O´Connor time and Hosszu WR are pretty much underrated.. Hosszu time might be the closest Olympic event thing from a swimmer not named Ledecky times to a Ledecky time..

I cannot understand what you’re trying to say

Katinka Hosszu’s 200 IM record seems comparable in distance ahead of past competition to a Ledecky WR.

I think the math says no, but the general theme of “nobody appears anywhere close” is probably true