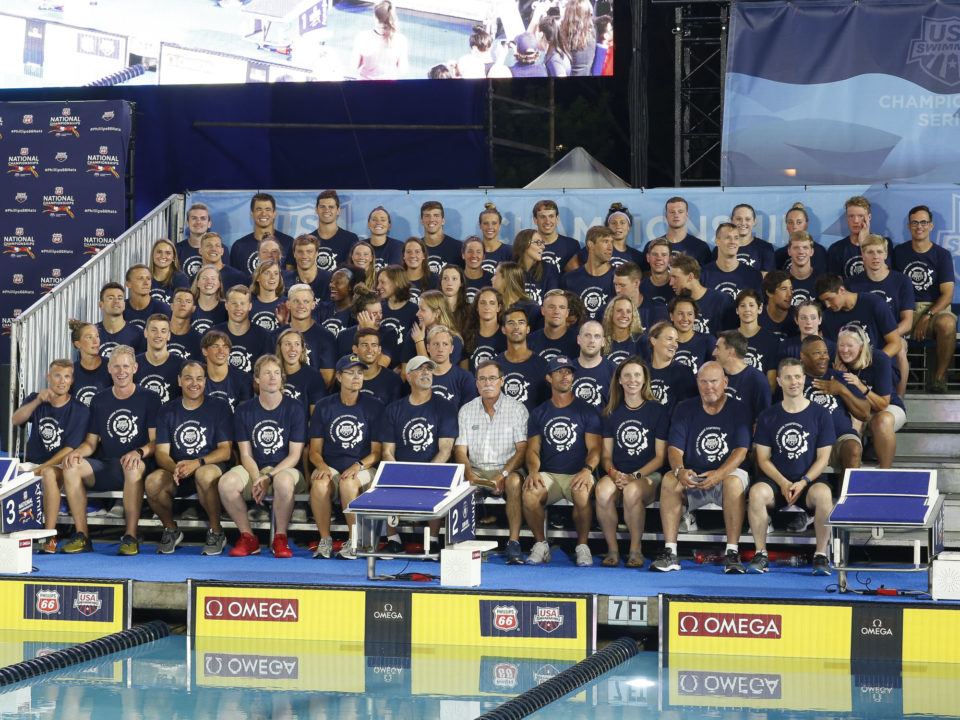 The roster is one of five that will ultimately be determined by this meet; you can see our running projections of the other four teams here. USA Swimming’s announced roster only had one major difference from ours – Gianluca Urlando was listed instead of Austin Katz, though our tallying shows Katz with a higher modified world rank. We’re asking about that discrepancy now.

Update – USA Swimming announced that Katz will be on the team instead of Urlando.  Here’s the note from USA Swimming:

Any athlete who makes Pan Pacs can swim any event they want to there, regardless of which events they qualified in. In addition, open water swimmers can swim pool events and vice versa.

Here are the rosters as announced by USA Swimming:

Curious if anyone can explain what criterion put Chase Travis on the women’s team. Looks like her best finish at US Nationals was 8th in the 1500.

I’m guessing Matt Grevers feels like an old fart in this pack, love that man

Someone from USA Swimming should be fired! They told two swimmers they made the team and then removed them. What incompetence!

In USA Swimming’s defense, calculating the modified world ranks for every athlete is pretty difficult. I spent a lot of hours this weekend putting them together just to keep our live-updating roster in the right order, and mistakes can certainly happen.

Can’t someone write a computer program to do it?

The paralympic swim team made the same mistake for Rio. The computation was even more complicated than this one. Then Russia got kicked out and USA got two extra roster spots to save the day. In USA swimmings defense they literally tried to announce the team immediately after the meet. Maybe 30 minutes afterward.

What they should have done is a double blind calculation by two separate people who do not even talk to each other until the final event is over and they compare their lists to make sure there is no discrepancy and then review their bubble calculations one more time before finalizing.

It’s an unfortunate mistake that was corrected quickly and no doubt resulted in disappointment for the swimmers impacted, but there’s no reason to think that it was done with malice. I don’t see why anyone should be fired, good grief. You are talking about actual human beings with families and bills.

Yeah, demanding that someone lose their job over an honest mistake like this is insane. Imagine having to default on your mortgage because you accidentally disappointed a kid.

or like, “Sorry bud, no birthday party this year… Mommy made a mistake once. No one got hurt and nothing was damaged, but people on the internet were mad.”

And you can’t forget the not-insignificant chance that the calculations got delegated to some unpaid intern because the bigwigs couldn’t be bothered with such tedious work.

U should follow a workshop on making mistakes in life – to learn a new less limited perspective on that aspect particularly . U would learn so much more and drop the tendency for such ridiculous comment .

Is it possible for MA to do a 50 back “time trial” at pan pacs by going all out for the first 50 of the 100, then just keeping it legal for the rest of the race? I’ve had teammates get 50 cuts that way before, and it’s the top time between the meets that goes to worlds.

Nope. USA Swimming only uses times from A finals for selection purposes to 2019 Worlds – not intermediate splits, time trials or relay leadoffs.

Why is Troy the only one not with the team shirt on?

Some third place finishers have been chosen by ranking…okay…so why not Will Licon who missed the second place by .01 to Wilson? I am sure he ranks high up in the ranking.

Urlando and then Licon would have been the next two chosen. Choices were done by modified world rank, the margin between 2nd and 3rd was irrelevant when making the choices.