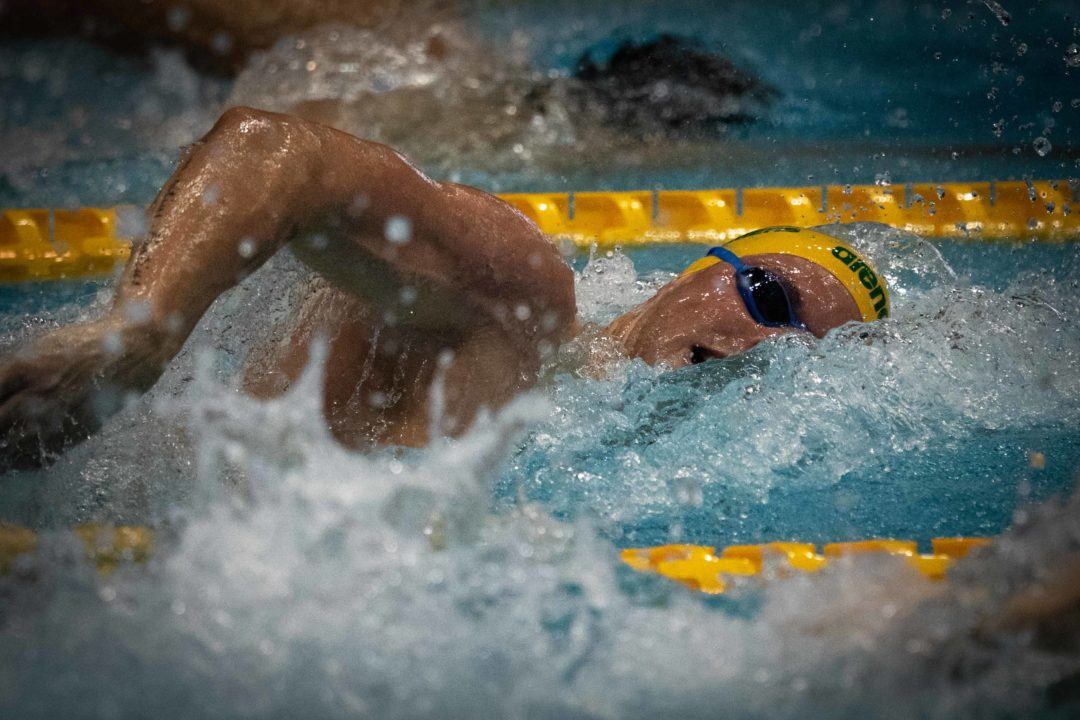 How well did the US team perform at Pan Pacs? I thought it would be interesting to look at performance differences from Nationals to Pan Pacs. Current photo via Mike Lewis/Ola Vista Photography

How well did the US team perform at Pan Pacs? There was a lot of concern and speculation over the effects of the long trip to Japan without sufficient time to acclimate to the time change as well as the short gap between Nationals and Pan Pacs. To that end, I thought it would be interesting to look at performance differences from Nationals to Pan Pacs. Pan Pacs is the major international meet of this calendar year, so the goal is surely for the US team to perform at its best there. Did they improve on their times from Irvine in Tokyo? There are certainly many confounding factors, and we have no way of knowing who was rested and to what extent at each meet (although obviously no one is ever rested). To simplify even further, I went ahead and just took the fastest time everyone recorded at each meet rather than just worrying about Prelims vs Finals. This isn’t entirely unreasonable, as for the US, the “B” Final at Pan Pacs is pretty significant too – and even Prelims for some events had the same kind of pressure attached to it!

Just looking at this one pair of meets gives us one data point, which wouldn’t say much of anything, so I also took as comparison the six previous years’ pairs: Nationals vs PanPacs in 2010 and 2014, Olympic Trials vs the Olympics in 2012 and 2016, and Nationals vs Worlds in 2013 and 2017 (the other two Worlds had their teams decided the previous year, so would not make for a meaningful comparison). Sometimes, an image can convey the message quickest. Here is a boxplot looking at the improvement in times from the national meet to the international meet, by year:

A negative number on the y-axis indicates that a swimmer in an event improved from Nationals/Trials to the appropriate International meet (whether the Olympics, Worlds, or Pan Pacs). For five of these seven years, the meat of the distribution is the same: half of the data ranges from -0.87% to +0.35% (that is, a 0.8% improvement to a 0.3% regression), and the median is negative in each year(from a 0.54% median improvement in 2013 to a 0.10% median improvement in 2017). You can see the thinly dotted lines marking out the common area. You might say the dotted area is a good guess for what the distribution should be.

One popular fan theory, expressed on the comments under this article and in others, is that we simply do not care about Pan Pacs as much as we care about Worlds or the Olympics. But in the above chart, while 2014 and 2018 are quite different from the two Worlds and two Olympics years shown, 2010 is right in line with them. What was different about 2010? In all three years, Pan Pacs started 11 days after Nationals ended. It’s not that athletes simply had more rest in that one year. But while this year they had to travel to Tokyo (an 8 hour time change), and in 2014 they had to travel to the Gold Coast (a 7 hour time change), in 2010 Pan Pacs were held in Irvine. The very same place as Nationals. No travel, no time acclimation necessary. Perhaps it is the short turnaround with the long time change that is the cause of this nearly-half-percent regression, and not the fact that those athletes representing Team USA just don’t care as much.

Here’s a different way of looking at the same chart above. It’s all the same data, but I merged the 4 World and Olympic years together in the same distribution, as well as Pan Pacs in 2014 and 2018 (but kept the 2010 Pan Pacs separate) for clarity:

Improvement into the four “major” international meets and improvement into Pan Pacs in 2010 is quite similar – 2010 was about a little bit worse, but only by a tenth of a percent. But 2014 and 2018 were dramatically worse:

While the headline story of Pan Pacs going away will probably be our performance in the relays, and the commentator’s performance in announcing them, I can’t help but wonder how this meet would’ve played out if we gave ourselves more time in between Nationals and Pan Pacs, or more time to adjust to the time difference. The athletes themselves aren’t making excuses for their personal performances, but maybe we should?

The short amount of time between meets, and the jet lag from the time change made it harder to put up top performances.

The USA swimmers did pretty well considering those factors.

You can check if you want, but I remember waaaaaay back in 1982, the USA made the same mistake for the World Championships in Guayaquil, Ecuador. Trials were held in Mission Viejo. In that time period, there was a very short training camp and barely enough time to acclimate to the time change and temperature/weather conditions (meet was held outdoors in a crappy facility with hot and humid conditions.) Most of the “superpower” teams had been there for two weeks…three weeks….even a month. The American kids barely had time to get used to the conditions let alone trying to peak so soon after an all out effort at Mission Viejo. Many complained they were unable to get their mental edge… Read more »

You forgot to mention that Rowdy Gaines helped the US win three relays and set WRs in two of them.

He lost his two individual races as world record holder. Even he has said t was devastating. The relays were a slam dunk before the meet began. You add up the solo gold medals, and the American team had a low of five – men and women combined. The team was not allowed to mentally prepare for their meet – let alone recapture their peak form and then go beyond that. Everyone involved agreed that Guayaquil was a disaster.

Add up the solo gold medals for both men and women in the 1988 Olympics and the total is also five–and that includes 3 by Janet Evans. I live in Chicago, and checking on the time difference I found that there wasn’t any, but for Rowdy Gaines it was probably one hour.

I’m not arguing with you, Jim. I don’t understand what your point is and why you are even trying to make one. The fact is the USA was not given enough time to prepare properly for the 2018 Pan Pacs as well as the 1982 World Championships. Don’t believe me? Read the October 1982 issue of Swimming World. Go to page 7 of the Viewpoint page and read what is written under “Swimming article and then move on because I certainly have.

I think the East Germans sent only a token team in 1978 because that event was held in West Berlin. Obviously the US was not going to dominate in 1982 the way they did in 1978. They won only 2 relays and 5 individual the next time in 1986.

0
0
Reply
KeithM
Reply to  He Said What?

Jim has a valid point re: the time change or the lack of it. You typed that “there was barely enough time to acclimate to the time change.” There may have been other issues in Ecuador but the “time change” wasn’t a factor. Ecuador is in the Western Hemisphere. The time there equates to Central Time in the US.

I don’t think u need a statistician or rocket scientist to conclude the small gap between the National and international meet this year was far from ideal and that preparation wasn’t either! I think even the old drunk English announcer (forgot his name) could figured it out too!

It was the only international competition for the US this year, they should have been ready!

43 medals in the pool says they were ready, or at least enough for the competition they were facing.

If Ledecky and Manuel had gone pro a year earlier and put their entire focus on this year’s Pan Pacs perhaps the number would be higher.

If we r going to a meet weshouldtake it seriously

Ledecky and Manuel skipped a year of college because they took the Rio Olympics that seriously. Perhaps they should have skipped college this year as well so they could do better at this year’s Pan Pacs?

5
-2
Reply
Newport Beach Lover
Reply to  He said What?

I think it would be best to take surveys with the athletes, coaches…and determine how they can do next.

I’m interested in doing something like this too! How did you scrape/obtain the data and what software, frameworks, and/or libraries did you use?