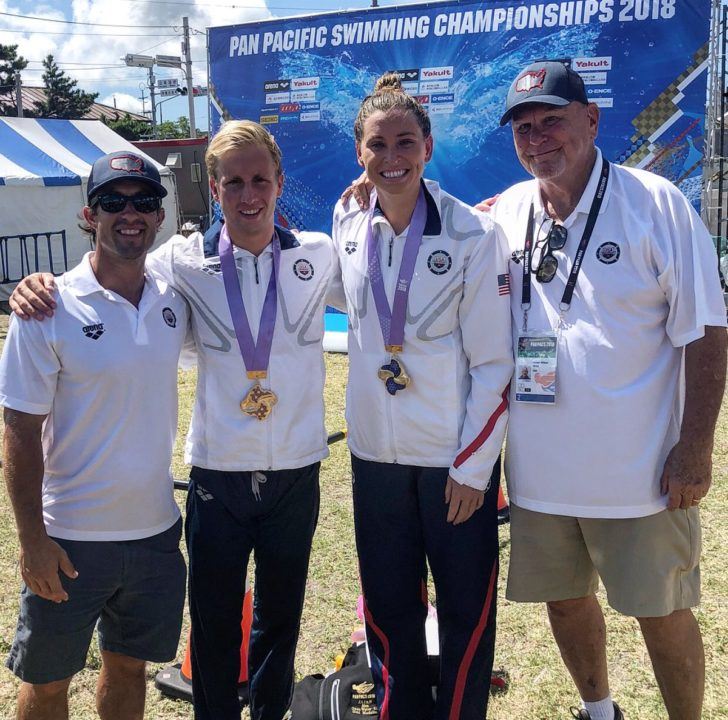 Jordan Wilimovsky won his third medal of 2018 Pan Pacs with a hard-fought 10K open water victory, while Haley Anderson battled back over the final lap to win the women's event. Current photo via Tyler Fenwick on Twitter

Jordan Wilimovsky won his third medal of 2018 Pan Pacs with a hard-fought 10K open water victory, while Haley Anderson battled back over the final lap to win the women’s event. Results have not been officially uploaded to the Seiko page, but race video on social media shows the unofficial medalists, barring any unforeseen changes.

In the men’s race, 20-year-old Taylor Abbott of the United States jumped out to an early lead, pacing the field for the first three laps of the five-lap showdown. Canada’s Eric Hedlin led a tight pack behind Abbott. Over the course of the fourth lap, Wilimovsky, the 2015 world champ and 2017 world runner-up, made his move, pushing past Abbott, with Hedlin also going by and remaining in second place by the end of the lap.

Wilimovsky and Hedlin battled side-by-side over the final lap, with Wilimovsky ultimately taking home the gold and Hedlin the silver. For Wilimovsky, that’s the second gold and third overall medal he’s won this meet, after winning the 1500 in the pool and taking silver in the 800. Australia’s Nick Sloman came home third, beating out a few other men in a very tight finish.

As for the women’s race, it was also an American who set the early pace: 2017 5K world champ Ashley Twichell. The 29-year-old Twichell led for the first two laps with a crowd on her tail, but gave up the lead to Australia’s Kareena Lee during lap 3. During that lap, both Australians made a run, with Chelsea Gubecka sitting third by the end of the lap after Lee and Twichell.

But in the fourth lap, Brazil’s Ana Marcela Cunha took over, roaring to about a two-and-a-half second lead with one lap remaining. Cunha is a highly-decorated open water swimmer, but all three of her World Championships golds have come in the 25K. She’s a three-time champion of the FINA Marathon Swim World Series (previously known as the 10K Marathon World Cup), winning the series in 2010, 2012 and 2014.

Anderson was third at that point, but rolled past Lee and Cunha over the final lap. The patient, veteran swim marks the second-straight Pan Pacs 10K gold for the 26-year-old Anderson. She won this event in 2014.

Lee would also pass Cunha for second place in a frantic final lap of movement atop the field. Cunha hung on for bronze. USA Swimming also tweeted that finish:

Congrats to Jordan and Haley! So, does this qualify Haley for a spot on the World’s roster next year? How does OW play into the selections for swimmers that do both OW and pool events? Based on swimswam’s projections, she’s slated for pool events at the Pan Am Games, but is clearly one of our best for OW at World’s. Surely we cannot wait until next spring to determine OW spots as they will affect pool event spots, too!

Yes, you will have to wait until next spring’s OW Nationals (date and location still undetermined …how can this be) to see which OW swimmers will pick or decline pool spots at Worlds, Pan AMs, WUGS. Kinda messed up system.

Official 2019 Worlds selection documents aren’t yet available from USA Swimming, from what we can find. At this point in the last cycle, they supplemented open water rosters in May of 2015, after 2015 Open Water Nationals. If they follow the same pattern, we’d get open water swimmers selected next May.

The top 10 swimmers in the 10K at Worlds next year will get an invitation to the Olympics the next year. (Technically, their country gets the invitation, not the individual). So if the US based their selection off the PanPacs, that could end up being two whole years that newer swimmers would not have a chance to set their sights on the Olympics.

Jordan Wilimovsky had quite an impressive competition at Pan Pacs. I feel like he doesn’t get the attention he deserves as an elite pool and open water swimmer. Congrats Jordan!

He gets as much attention as anyone in open water, just that nobody really cares about open water. He’s not that elite as a pool swimmer. You Americans have a skewed view of men’s distance swimming, since they’re so terrible at it. I mean, the best Americans at Worlds last year in that event were 16th and 21st. Their TOP 1500 finisher was the same place as their LOWEST finisher in any other race.

What is your definition of elite swimmer? Wilimovsky was 4th at 2016 Olympics in the 1500. At 2017 Worlds that 21st place swimmer was 17 years old and was sick the week before the race (102 temp and lost 5 pounds as I recall). 2018 Pan Pacs, all three US swimmers are under 14:50 finishing 1-2-3 regardless of that idiotic FINA rule against sweeping an event. I’d say the future of US distance swimming is in good hands.

Wilimovsky won 2 individual golds and a silver overall at these championships which is better than any other male swimmer from the U.S. individually (Murphy and Kalisz both won 2 golds but no other individual medals.), but no one is touting him as one of the top performers of the meet. There is an article every other day about Dressel and Andrew. I would love to see some coverage of how he trains for both pool and open water and more insight into his race strategies. While both open water and the 1500 are considered distance, they require very different skills.

Hi dmswim – here’s a few articles that might whet your whistle on his training:

To read more about Wilimovsky, you can check out his tags page here: https://swimswam.com/tag/jordan-wilimovsky/page/4/

Are you high? Jordan beat Mack Horton in Rio. It doesn’t get more ‘elite’ than that.

Interesting, despite being the top two swim nations- USA and AUS don’t have the strongest pedigree in world Champ and Olympic Open water Swimming….

Open Water is still a thing?

More of a thing than you’ll ever be

USA does not have much depth here. Heron, Abbott and Brinegar have all swapped positions in the 3 OW water event series (OW Nationals, France, Pan Pacs). Jordan did not compete in France, but dominated by a minute in other two races. Interesting that Jordan did not go to France, so based on finish points in all 3 events (OW USA money determined by this) I believe Heron is first, Brinegar is 2nd and Abbott is 3rd for USA award/funding money (although Jordan has pool money). Some work to do to get the 2nd US swimmer into top 12 (if that is still number) for Worlds next year, which is what gets to Olympics in first round (and likely only… Read more »

Jordan won Nationals by 14 seconds, with Heron and Brinegar basically dead even for second. In France, Brinegar finished 8th overall, and less than two seconds out of second (which was the 2016 Gold Medalist). Herron is 22. Abbott is 20 and Brinegar is just 18. They are learning and any of the three will give the USA a good second to Jordan.

You are correct on Jordan’s time, I should have looked closer at Jordan’s win times as a “minute” was clearly an exaggeration/feeling , as here with somewhat of a race with Hedlin, he was only 35 seconds over Heron. But once you have a solid lead in OW you just need to maintain it as there is no record… Also true it is hard to judge France as Heron who was way back had less on the line, but Brinegar and Abbott just behind him, by 2 or 3 seconds, were fighting for a spot at Pan Pacs.

Just a second comment on “learning”. What learning will occur between now and May as far as OW meets? Maybe one International event in the fall for the college swimmers on the National team (Casey and Gravely included… although not sure if Gravely is even in college yet next year…). Heron is done with college swimming so he has best chance for more international swims, but he is also far more experienced in international OW swimming than the others.

Brinegar has FINA Open Water Jr Worlds next month with other 18&U. There will be good OW competition as Fontaine from France participated in OW Worlds last summer and Euro OW Championship just last week.

Brinegar is clearly the one to see if he can gain enough experience. He is faster in the pool than Heron and Abbott. Abbott has done FINA Open Water Jr. Worlds in 2014(gold) and 2016. Brinegar went in 2016 also. USA just does not have many events for OW swimmers funded, so unless pro (like Gemmell, , Meyer, Peterson were) hard to get to many meets. There really are not (Fran Crippen in FL maybe (slightly) being the exception) meets in US to gain experience with top competitors. But evidently Jordan does not really do many open water meets in a year, so there is that…