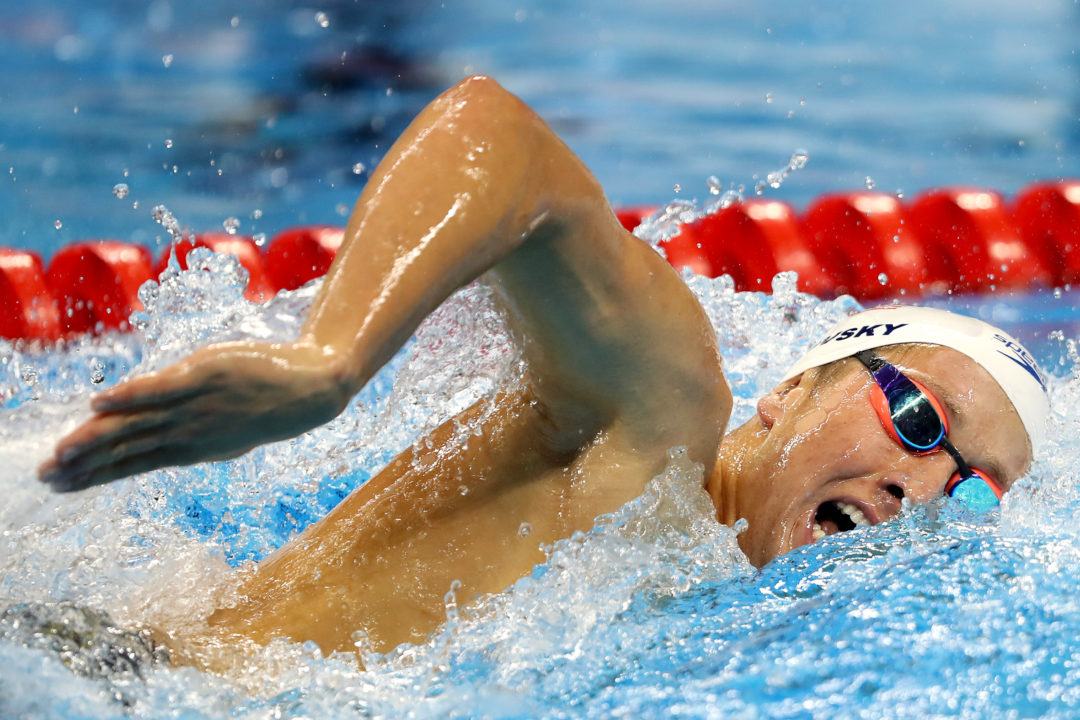 After U.S. Olympian Jordan Wilimovsky competed at Australia's short course national meet last month, we caught up with him to get the scoop on his plans for the season. Most notable: he returns from Australia next month and will swim both open water and the pool 1500 this season. Archive photo via Simone Castrovillari

After U.S. Olympian Jordan Wilimovsky competed at Australia’s short course national meet last month, we caught up with him to get the scoop on his plans for the season. Most notable: he returns from Australia next month and will swim both open water and the pool 1500 this season.

My home base is still in Santa Monica I’m just down here for a little while for fun. I am spending most of the time on the Gold Coast training with Michael Bohl and his squad.

Q: How did the decision to head to Australia come about?

I talked with my coach Dave Kelsheimer about spending some time training and traveling in the fall after I finished up university. I’ve spent some time down here before in the 2015-2016 season before Rio and it was a lot of fun

Q: Have you connected with any Australian swimmers while you’re there? Any cross-national friendships/rivalries for fans to keep an eye on?

Haha I’m not sure about any rivalries. I train with Dave Mckeon and Dan Smith most days. Some days when we do some bigger sessions I get the opportunity to race Tommy Gun Wooton and he puts down some incredible times. The rest of the squad includes Grant Irvine, Emma Mckeon, Andy Ryan, Georgia Bohl and some other really fast swimmers so it’s fun to be able to race them and be apart of that team.

Q: What was it like swimming at a different nation’s championship meet? How different is a high-level Australian meet from the U.S. meets you’re used to?

It was really fun to get down to Adelaide to race their nationals. It was short course meters which I’ve never raced so it was cool to try. And it was awesome to get to race some new people I don’t normally see. It’s still early in the season so most teams just swam through the meet but there was still some fast times.

Q: Last summer, you put a premium on open water swimming for the World Champs. What’s the plan for this year? Is pool swimming still in the mix as an end-of-season event for you?

Yeah definitely. This year I’m training for the 1500 and 10k so hopefully I’ll be able to compete in both at Pan Pacs. Last summer, being the first year of the quad, it was fun to just focus on the 10k, but this summer with the 1500 being swum before the 10k I would like to see where I am in both the pool and open water.

Q: What’s your training cycle look like for the upcoming season? Any big meets you’re putting a big focus on in your schedule? Will you be back in the States for Nationals/Pan Pac Trials?

I’m going to swim Queensland state titles in December and then return home. I’m not sure what meets I’ll do in the spring but the focus is definitely on open water nationals and the pan pac trials for the 1500.

This is a questionable move by Gordon if you ask me. If he really wants to train for open water I think it would make the most sense to go to Hawaii or California where the waves are biggest. Swimming around in the less wavy Australian waters may leave him unprepared.

um…Jordan? That just shows how unpopular open water swimming is and always will be. It’s been almost 24 hours and nobody noticed you called him Gordon. Anyway, I think that Austrailia is a good move as he didn’t medal last year with his American coach.

Ok splash and dash we’ll see who knows more about open water when Jordan is flailing around cuz the waves are too big for him to handle. Hawaii has bigger waves end of story

Couldnt help but laugh out loud when I read that. How good open water swimmers are is not at all based on how big the waves are where they live.

Thanks for the nice pick-me-up. 🙂

Really???? Your gonna tell me they don’t have to worry about being swept away while swimming out in the middle of the ocean???? I get that Jordan is from California and is used to swimming over big waves but you can’t just assume he’ll still be able to after spending all that time in Australia. He might be rusty.

You do realise that the Gold Coast has 42km of surf beaches and has great waves depending on prevailing winds etc? The Pacific Ocean isn’t flat over here

Ok I get what you’re trying to say. I guess it is possible for Jordan to learn how to use the waves to his advantage by riding their momentum but I still think he can learn to do that better in Hawaii where he can challenge himself with the biggest waves. You make a good point about Australian waves but its still no Hawaii imho.

This is classic. There are more sharks down under, so I think that will help him prepare for any obstacle that comes his way. I hear that Jordan loves a challenge, so I understand why he would swim in aussie land for some time. The swell on the gold coast is also smashin right now. You do you Jordan. Love the tenacity and swagger with which you carry yourself. #tokyo2020#sharks#chad

Great experience for him. Getting to travel and train with an elite group and fresh faces. One of the benefits of our sport!