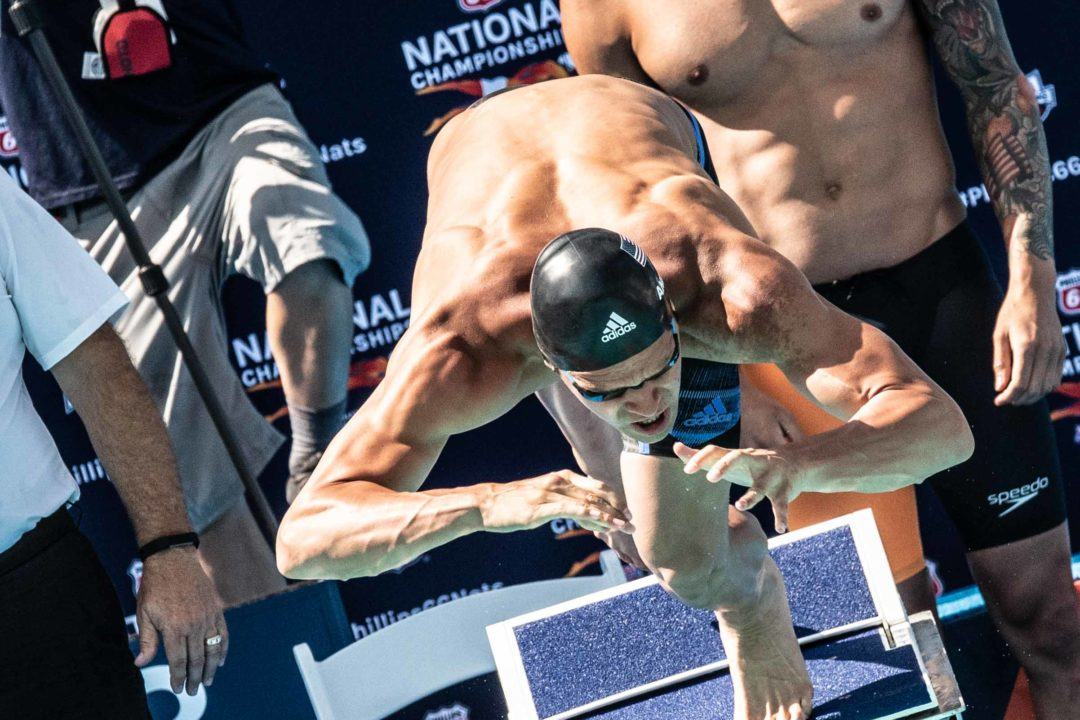 The final night of U.S. Nationals has wrapped, and we've done the math to put together what we project as the American roster for the Pan Pacific Championships. Current photo via Mike Lewis/Ola Vista Photography

The final night of U.S. Nationals has wrapped, and we’ve done the math to put together what we project as the American roster for the Pan Pacific Championships.

We were compiling these in real-time, so bear in mind that there could be some early errors that we’ll be live-updating as we double-check out math. Also note that Jr Pan Pac rosters are not yet finalized – they won’t be finalized until we get results of tonight’s C and D finals.

Update: We’ve put together very tentative Junior Pan Pacs rosters – swimmers tend to be very likely to decline those spots, so expect the roster to change significantly by the time it’s announced.

From what we’ve found, only three swimmers from priority 3 (athletes who took 3rd in an event this week) will make the team in each gender: Justin Ress, Sean Grieshop and Austin Katz for men and Haley Anderson, Ella Eastin and one more for women. (Those are based on our compiling of ‘modified world ranks’ on the fly, so bear with us there as well).

The final women’s spot appears to be a world ranks tie between Erica Sullivan and Isabelle Stadden. One possible outcome is that Anderson or Twichell cedes their pool spot, as they’ve already qualified in open water and could still enter pool events at Pan Pacs without taking an official pool roster spot. Another possibility is that Eastin declines the team to rest up from mono, taking a likely World University Games roster spot for next summer and calling it a season.

Other than KL getttung the top time in the 1500 free and Dressel probably bumping one of the top 2 in the 100 free what are the other possibilities that someone else can bump one of the top two times from next years worlds roster at the pan pacs ?

Thanks for compiling the on-going list for all teams selected! Great job…and nice to see Katz and Eastin in with their respective efforts. A bit of drama for each of them, in different ways…

Eddie R, of course, has also done very well. I’ve not looked at the rosters to see all he’s placed on teams. Nor have… Read more »

It says Carson foster 3rd priority for pan ams in 2 back. Has to be a typo. Does it mean 2IM?

They just announced the team on the livestream, and I might have misheard, but Katz was NOT called, and Urlando was…

Nvm, she wasn’t announced on the livestream

That doesn’t make sense, per their seedings.

I guess USA Swimming doesn’t follow the rules that they set up for making the team!!!

sweet drama.. i can see Eddie fighting this

That is just mean! 😀

Sidenote: It would make sense if Urlando was in along with Katz, meaning that Wilimovsky was in due to open water. But Urlando in and Katz not seems like there has to be something going on.

AMEN. USA SWIMMING THAT WAS SO WRONG

So Chadwick and Levant are on the bubble for Worlds, as they are currently relay qualifiers, but they don’t get to swim PanPacs, but guys who finished behind them can bump them from the spot(s). I think Lia Neal as well.

That is correct. It’s unlikely that someone bumps Levant-it would require Conger and someone else swimming a 200 free and both going faster than Levant’s 1:46.46. I don’t know who the candidate for that would be, Dressel or Grothe? It feels unlikely that either one swims the 200 for that purpose.

Chadwick is much more precarious-it seems very unlikely that Dressel doesn’t land faster than 48.44, and I haven’t looked at the schedule but based on how his events looked I wouldn’t be surprised to see Conger take a whack at a 100 free.

Lia Neal’s time is probably good enough to keep her on the team, but I would think that 3 girls (Dahlia, Smoliga, McLaughlin) will be adding… Read more »

Looking in summary these teams appear to be a big change from 2016/2017 on the men’s side. Not so much of young talent coming up but just some pretty big names you would expect to make teams just not. Anyone give an explanation besides just not having a good meet? For Pace Clark, Ryan Held, Cody Miller, Clark Smith, Tim Phillips. Or is the sport at the top end just far more competitive now?

Looks like there are two Teddys now. This one knows how to make that stick figure

Hopefully he’s offer a position in the PanAms next year.