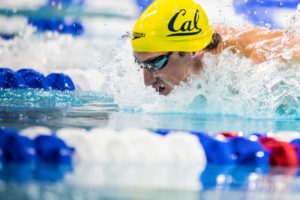 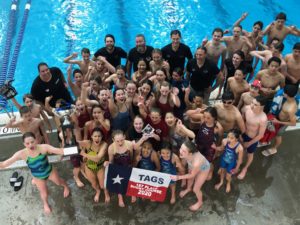 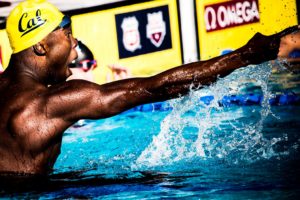 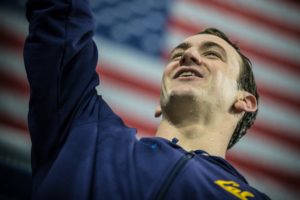 Cal’s Ryan Hoffer is chasing his 2nd title of the meet in the 100 fly against top seed Cody Bybee of ASU and teammate Zheng Quah, the defending champion.

Sean Grieshop, born November 23, 1998, is an American medley swimmer from Texas. He swims for Nitro Swimming under Mike Koleber. Grieshop broke on to the international swimming stage in 2015 aged 16.

His sophomore year, Grieshop made huge strides at the NCAA championships. He started his meet by breaking his own Cal record in the 500 free not once, but twice, clocking 4:11.11 in the prelims and then pushing it to 4:10.29 at night to place 2nd behind Texas’ Townley Haas. The next day, Greishop dropped a whopping 4 seconds in the 400 IM, first breaking 3:40 for the first time in prelims, then cutting 2 more seconds in finals to touch 2nd again at 3:37.03. On the final day, he dropped 9 seconds from his seed in the 1,650, touching at 14:35.82 to place 4th, just behind Cal teammate Nick Norman.

At just 16 years old, Grieshop took bronze at the U.S. Nationals in 400 meters medley in 4:17.02. That time placed him on the 2015-2016 U.S junior national team and booked his spot on Team USA for the World Junior Championships.

In Singapore, Grieshop pulled off a big upset in the 400 meter medley. Throughout the race, he sat behind Junior World Record holder in the event, Brandonn Almeida. At the 350 meter mark Grieshop turned within half a second of first. But he stormed home in an impressive 27.94 final split to take gold in convincing fashion. He finished in 4:15.67, almost 1.5 seconds ahead of silver.

At WUGs, Grieshop placed 2nd in the 400 IM in a time of 4:13.52, earning his first senior international medal. In the 4×200 free relay, Grieshop was called to swim in the prelims, where he split 1:48.43 to help Team USA earn a 1st seed heading into finals, which they ended up holding, earning Grieshop a gold medal. Grieshop also ended up swimming the 800 free individually, touching at 8:04.10 in the prelims to place 9th overall, just missing the final heat.