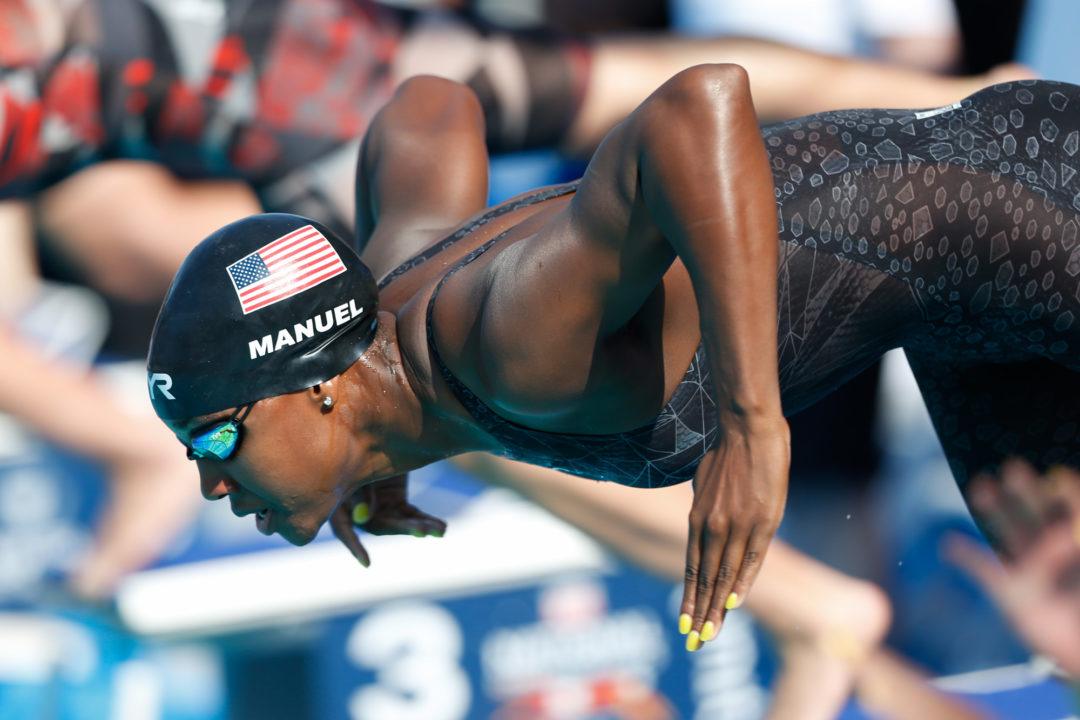 Manuel swam both the fastest 50 and 100 meter freestyles ever done on American soil at this week's US National Championship meet. Archive photo via Tim Binning/TheSwimPictures.com

Simone Manuel, already owner of the American Record in the 50 free, has now taken down the U.S. Open Record in that event as well, swimming a 24.10 on Sunday evening in Irvine. That took down Cate Campbell’s 24.13 from 2008 as the fastest time ever swum on American soil, and also broke Dara Torres’ Championship Record of 24.25 from the 2008 Olympic Trials.

Manuel has earned a reputation as a ‘big meet swimmer,’ which is a reputation largely earned in the 100 free. In both 2016 and 2017, she was 2nd in that race at the U.S. Trials, before going on to win gold at the Olympics and World Championships, respectively.

She’s shifted that narrative a little this week in both of her primary events: the 50 and 100 freestyles. While U.S. Nationals are certainly a ‘big meet,’ the reputation has focused on her ability to get to the wall first at the major international competition after sneaking through the national competition. In both the 50 and 100 free this week, however, she’s set new Championship and U.S. Open Records (read about the 100 free here).

One of the swimmers that she’s been able to pick-off internationally is Campbell, where in 2016 she beat Cate Campbell, who was shortly off a World Record in the 100 free; and in 2017 she beat Saraj Sjostrom, who set a World Record in a relay leadoff earlier in the meet. Manuel will face the Australian Campbell at this summer’s Pan Pac Championships in Tokyo.

The existence of that record by Campbell shows how interesting her career arc has been, in that it was set more than a decade ago, and she’s still only 26-years old. The swim was done at the 2008 Santa Clara Grand Prix, which came 2 days before Campbell’s 16th birthday. In spite off success at such a young age, and success well into her 20s (including the aforementioned World Record), Campbell still has no Olympic individual gold or silver medals to her record. Her best solo finish was a bronze in the 50 free in 2008, shortly after her U.S. Open Record swim, to go with 5 relay medals.

Campbell is currently ranked #1 in the world this year  in the 50 free (23.78), and #2 in the 100 free (52.37) behind only her younger sister Bronte, who is skipping Pan Pacs. Manuel will be the 2nd seed to Cate in both of those races, and so there’s still a little bit of underdog in the events, in spite of Manuel being better in the buildup.

Manuel v Campbell will be one of the most interesting match ups at Pan Pacs next week.. or will the youngsters Ruck and Rikako upset them both??

Ruck will be closer in 100. I don’t think Ikee has enough speed to match the three (yet). I think Simone will have a good meet