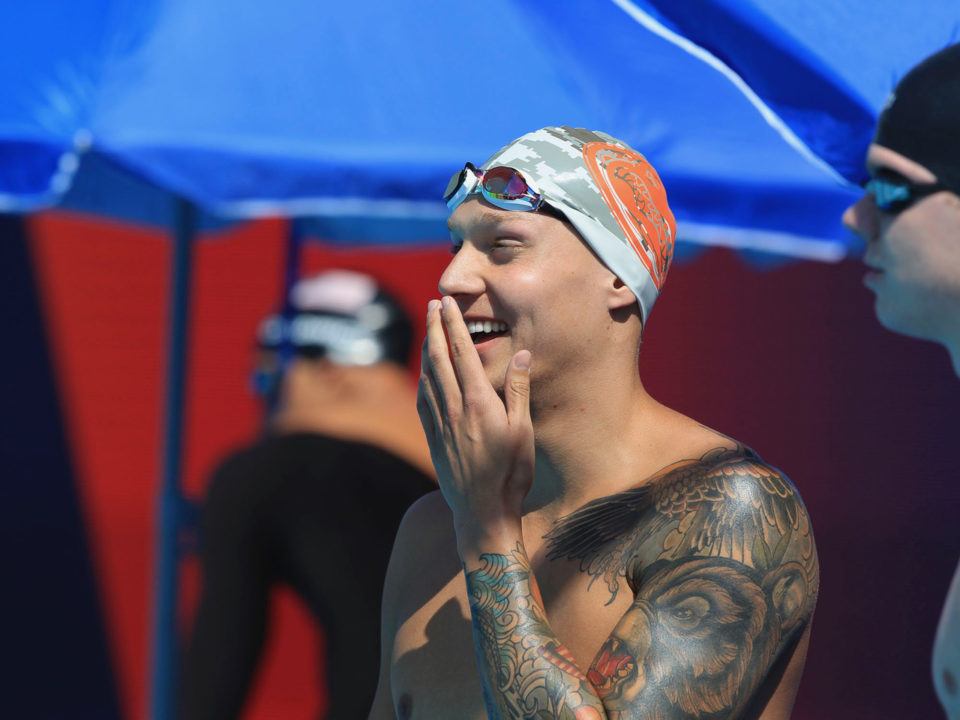 Andrew Seliskar of Cal ripped a 1:45.77 in prelims to take 2.6 seconds off his previous lifetime best; he led the qualifiers for tonight’s final by half a second. Indiana’s Blake Pieroni (1:46.26), the national champion in the 100 free, Conor Dwyer (1:46.34), and Jack LeVant of North Texas Nadadores (1:46.39) will all challenge Seliskar for a spot on the Pan Pacs roster. Townley Haas, Jay Litherland, Jack Conger, and Trey Freeman qualified with 1:47s and have a shot at making the top four, as well. LeVant swam the 2nd-fastest 200 free in history for 17-18 boys; he is .40 off Michael Phelps’ NAG record of 1:45.99.

Micah Sumrall was the top qualifier in the women’s 200 breast, slipping past Indiana’s Lilly King in the penultimate heat to touch first overall in 2:23.27. Indiana/Mission Viejo’s Annie Lazor (2:25.01) and Texas A&M’s Bethany Galat (2:25.23) qualified just ahead of King (2:25.33). Sumrall, King, and Galat have all swum 2:21s in their careers so tonight’s final could be a tight race. 16-year-old Ella Nelson (Nashville Aquatic Club) and 17-year-old Zoe Bartel (Fort Collins Area Swim Team) could both move up on the all-time top-10 lists for their respective age groups, in addition to vying for spots on international squads.

Cal’s Josh Prenot clocked the 5th-fastest American performance in the 200 breast in heats, going 2:07.69 to lead the qualifiers for tonight’s A final. Will Licon of Texas (2:08.92) will be on his right in lane 5 tonight; as the reigning American record-holder in short-course yards, he will be one to watch. Olympian Kevin Cordes and Nic Fink of Georgia, were the only other sub-2:10s this morning, qualifying in 2:09.58 and 2:09.61, respectively. Olympian Cody Miller snuck in at 8th with 2:10.59, after having scratched this event at 2017 nationals.

16-year-old Regan Smith of Riptide lowered her PB by .16 to earn her spot in the middle of the pool for tonight’s final. Her 2:07.03 is the 3rd-fastest ever swum by a 15-16 girl; she is inching her way toward Missy Franklin’s NAG of 2:05.10 and Elizabeth Beisel’s 2:06.39, the only two performances faster than hers. Aquajets’ Isabelle Stadden, also 16, went the 5th-fastest time in prelims (2:08.48); she’ll have another opportunity to move up the 15-16 ladder tonight. Defending national champion and SCY American Record holder Kathleen Baker of Cal (2:08.14) shouldn’t be counted out; she looked smooth this morning and has already been 2:07.0 this season.

The last several heats of men’s 200 back looked like synchronized swimming, with the top finishers matching stroke for stroke and coming to the wall separated by mere tenths. Olympic champion Ryan Murphy of Cal put up the top time of the morning (1:56.39); he was followed by Cal teammate and Olympic silver medalist Jacob Pebley (1:56.88). Also qualifying under 1:57 was NCAA champion Austin Katz of Texas (1:56.97). Florida’s Clark Beach (1:57.06) and Missouri’s Nick Alexander (1:57.18) both dropped well over 1.5 seconds in prelims to qualify fourth and fifth. 16-year-old Carson Foster of Mason Manta Rays, 3rd on the all-time list for 15-16 boys with 1:57.70, is just .67 shy of Aaron Peirsol’s NAG of 1:57.03.

In addition to a national title, the winner of the 50 fly will earn the first spot on the 2019 World Championships team. Kelsi Dahlia (Louisville) led the way this morning with 25.97, just .49 off her American record. Team Elite San Diego’s Kendyl Stewart qualified second in 26.16; her best time is 25.93. Her teammate Sarah Gibson qualified fourth with 26.73, just behind North Carolina’s Hellen Moffitt (26.71).

Nope. They can be bumped by someone who swims faster at Pan Pacs.

Can the winner of the 50s here be bumped in any way off the World Championships roster?

Not in any competitive fashion. It would be not fully accurate to say “no way,” but the ways they could be bumped are things like “not maintaining competitive shape” and “conduct” clauses.

Layman answer: can’t be bumped
Attorney reviewing selection crieteria answer: nobody can bump them per se, but they can be removed from the team for the same provisions that always apply.

Taking an IV drip or drinking tap water, for example.

Vote Up10Vote Down Reply
too impressed

If the top time was from the b-final, could the overall winner be bumped since the worlds qualifications are time-based?

Worlds qualifications times are only taken from A heat at this meet.

And A & B finals from Pan Pacs.

Sorry, for other races other than the 50s. (exception to 50 free)