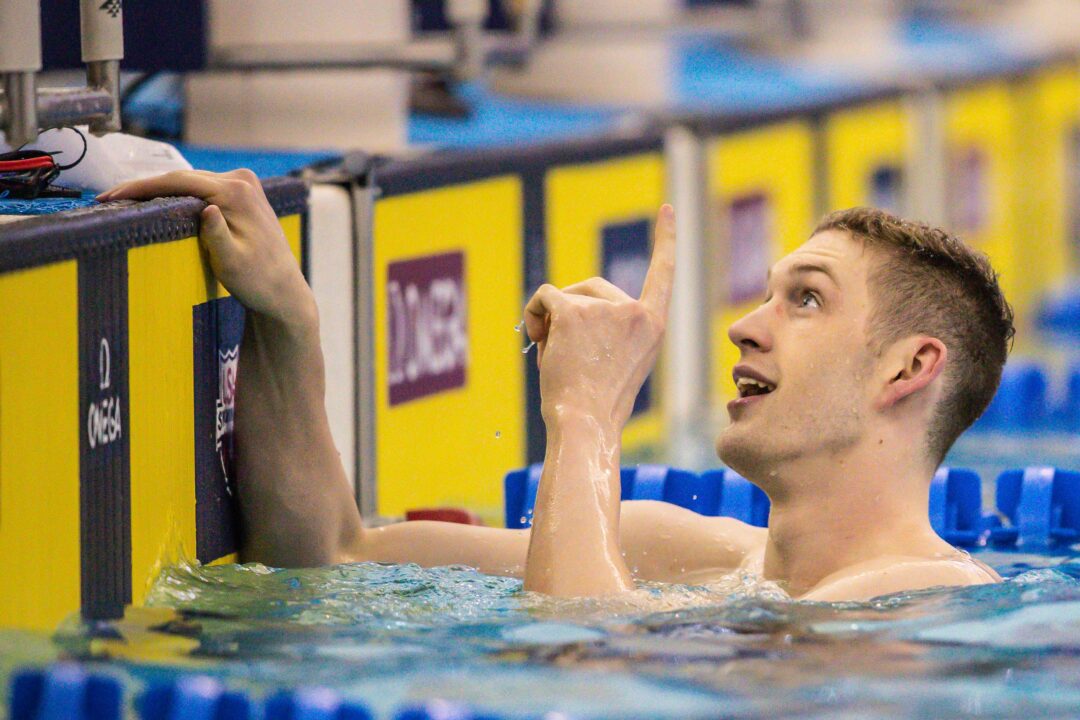 Hunter Armstrong was a star in Greensboro, breaking the world record in the men's 50 back while also winning the 100 back. Current photo via Jack Spitser/Spitser Photography

An action-packed five days of racing at the Greensboro Aquatic Center has come and gone, with 41 swimmers earning a berth on the U.S. roster at the 2022 World Championships.

The competition had a bit of everything: established names continuing their dominance, youngsters having breakout performances, a couple of veterans bouncing back after the missing Olympic Games, and we even saw a world record go down.

With the meet wrapped up, it’s time to hand out our official SwimSwam Awards for the 2022 U.S. International Team Trials:

An argument could be made that Hunter Armstrong is more suited to the ‘Breakout Swimmer of the Meet’ category, but after what he did in Greensboro, he’s undeniably the Male Swimmer of the Meet (he was actually the breakout male of the Olympic Trials last year).

On the heels of an NCAA Championship performance that left something to be desired, Armstrong had a great start to Trials on the opening day of action on Tuesday, tying for fourth in the men’s 100 freestyle in a best time of 48.25, all but solidifying himself his first World Championship berth.

That was only the beginning for the Ohio State Buckeye, as Armstrong then had a jaw-dropping performance in the 50 backstroke, shattering the American Record in the prelims (24.01) before setting a new world record in the final (23.71).

Armstrong broke the previous world record of 23.80, set by Russian Kliment Kolesnikov at the 2021 European Championships.

The 21-year-old Armstrong followed up by winning the 100 back in a personal best time of 52.20, upsetting world record holder Ryan Murphy (52.46) while becoming the fifth-fastest American of all-time.

Armstrong was an Olympian in the 100 back last summer, tying for ninth place, and he added a gold medal as part of the U.S. prelim team in the men’s 400 medley relay.

Armstrong closed things out by tying for fifth in the 50 free in a time of 22.00, more than half a second under his best time coming into the meet (22.57).

Having qualified for the World Championship in two individual events (where he’s arguably the favorite for gold in both) and one relay, Armstrong then told SwimSwam he’s opting to turn pro and will forgo his final two seasons of eligibility at OSU.

Dressel was the lone male swimmer to place first in more than two events at the meet, and he won four.

The 25-year-old’s win in the 50 fly marked a new U.S. Open Record, though his best performance of the meet was probably in the 100 fly prelims, where he clocked in at 50.01 to tie the 11th-fastest swim ever.

It’s almost become a cliché at this point to give Female Swimmer of the Meet honors to Katie Ledecky, given her dominance both in the U.S. and worldwide for what’s now nearing a decade, but she showed out with four big wins in Greensboro to get the nod from us.

While the early indicators told us the move was working for Ledecky, it really shone through when put to the test last week, as she produced some very strong swims that set her up well for the World Championships.

The highlight came on the opening night of the meet in the 800 freestyle, where Ledecky cracked the 8:10-barrier for the first time since 2018 in 8:09.27, notably more than three seconds faster than she was in the Olympic final last summer and even quicker than she went at the 2016 Olympic Trials (8:10.32) prior to setting the current world record.

The primary objective of any selection meet is getting your hand on the wall first, and Torri Huske did that three times in Greensboro.

Although the 100 free and the 50 fly were her only best times, and by slim margins, Huske excelled and came out on top over extremely competitive fields, with her combined margin of victory across three events sitting at just 32 one-hundredths of a second.

There were a handful of male swimmers who qualified for the World Championships having never previously represented the U.S. at an Olympics or Worlds before, and the only one who qualified in multiple individual events was Charlie Clark.

Clark, coming off his sophomore year at Ohio State, orchestrated a massive drop in the men’s 1500 free on the opening night of competition, placing second to Olympic champion Bobby Finke in a time of 14:51.78.

After Finke has recently filled the void in American men’s distance swimming, Clark’s rapid improvement not only solidifies a strong 1-2 punch in the events, but also indicates there’s more to come down the line.

At 19, Clark is the youngest members of the men’s team this year.

In an ultra-competitive women’s 200 freestyle final that featured six Olympians, 15-year-old Claire Weinstein surprised everyone by cutting through the field on the last 50 and snagging the second spot behind Katie Ledecky in a time of 1:57.08, earning her an individual berth on the World Championship team.

While everyone believed success in this event for Weinsten was imminent, having tied Sippy Woodhead‘s National Age Group Record for 13-14 girls in the event earlier this year (1:58.53), this performance came earlier than expected.

Weinstein had lowered her best from that 1:58.53 down to 1:57.71 in the prelims, and then backed up with the pressure on in the final. The Sandpiper of Nevada swimmer turned fifth at the 150 wall before overtaking the likes of Alex Walsh, Leah Smith and teammate Bella Sims down the stretch.

Weinstein is now the fastest 15-year-old ever in the event, and, despite having only recently aged up, ranks third all-time in the 15-16 age group behind Missy Franklin and Ledecky.

As the youngest member of the U.S. roster this year, Weinstein’s Greensboro performances, highlighted by that 200 free, were just the start of a bright career on the senior stage.

Hayes didn’t let a stress fracture in her foot impact her performance in the pool, as the 16-year-old had numerous standout swims, highlighted by a World Championship qualifying 2:09.99 in the 200 IM.

COACH OF THE MEET: ANTHONY NESTY, UNIVERSITY OF FLORIDA

Anthony Nesty, who was named the head men’s coach for the U.S. at the World Championships back in February, put six swimmers on the team last week, the most of any coach.

Nesty also had Kieran Smith (men’s 200/400 free) and Bobby Finke (men’s 800/1500 free) earn two victories apiece, and he also coached Trey Freeman to his World Championship berth as the Gator took second to Smith in the 400 free and added a spot on the 800 free relay.

2021 U.S. Olympian Natalie Hinds, a UF alum, recently made the move back to Gainesville in January and had a strong showing that included placing fourth in the women’s 100 free to qualify for the 400 free relay.

The winningest college coach in history continued his unmatched run of success in Greensboro by placing five swimmers on the U.S. roster, three of whom swam with the Longhorns in the NCAA this season. Those three—Drew Kibler, Carson Foster and Coby Carrozza—all qualified for Budapest in the 800 free relay, with Kibler adding the 200 free individually and Foster qualifying to swim the 200 and 400 IM.

TEAM OF THE MEET: SANDPIPERS OF NEVADA

Head coach Ron Aitken and his staff led three swimmers onto the World Championship team, all aged under 18.

As mentioned above, 15-year-old Claire Weinstein made the team individually in the 200 freestyle, while Bella Sims made the 800 free relay and had a trio of third-place finishes in the 400, 800 and 1500 free. 16-year-old Katie Grimes had an exceptional meet that included a win in the 400 IM and a runner-up finish to Ledecky in the 1500 to qualify for two individual events in Budapest.

On top of those three, the Sandpipers also had some high-end performances from 17-year-old Ilya Kharun, including a sixth-place finish in the men’s 50 fly (23.90), plus fellow homegrown products Brice Barrieault and Paige Kuwata.

Paige Kuwata overcame so much this past month and did amazing! Glad to see her name stated in this article

i know dressel might be the boring choice but I still think he should be male swimmer of the meet. No shade to Armstrong but dressel had impressive times and won 2 more events

It’s crazy how Armstrong is like 3 tenths away from the 100 back WR but he’s “only” the fifth fastest American in the event, overwhelming American depth or stagnating event for the whole world?

That backstroke WR is bound to see a massive breakthrough soon (though many of us have been saying this for a while), the Americans have had ridiculous depth in this event for the past 3 decades, this event was second only to the IM’s in difficulty for qualifying to a major international meet for nearly two decades.
Think of it like this, the top 5 all time is closer to each other than the top 5 all time in the 50 freestyle, so if I were a betting man, I would put a lot of money on hunter getting damn close to that record soon

Both male awards go to the Buckeyes! Amazing!