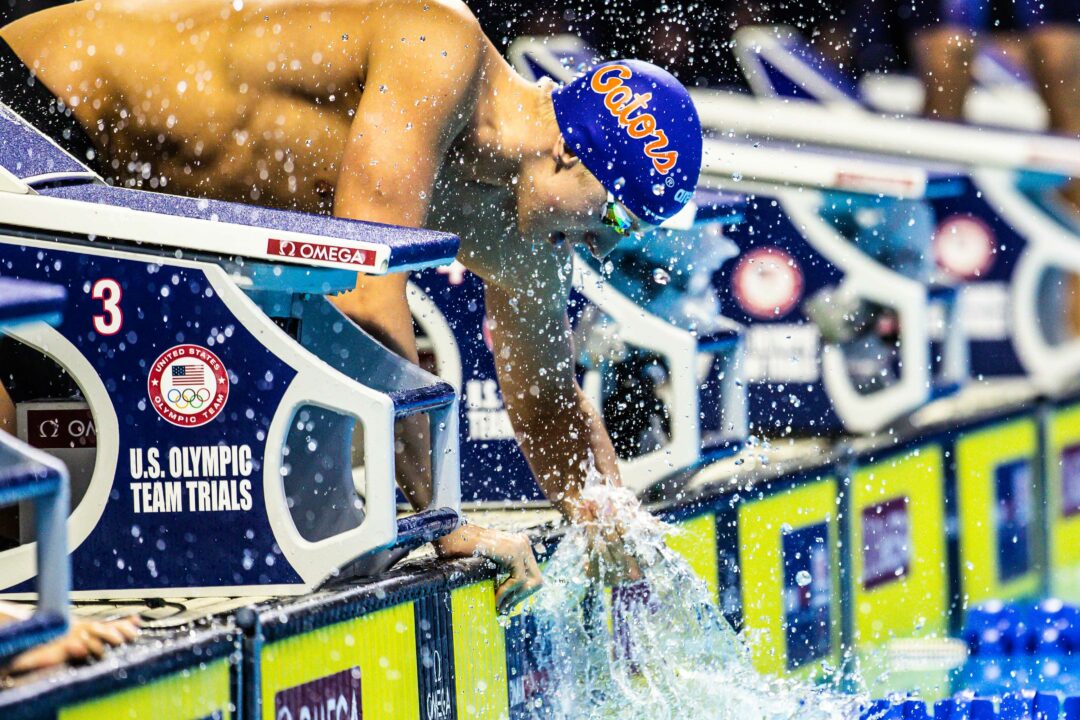 Florida leads the may in terms of qualification per NCAA program with 5 past or present Gators who will be racing in Budapest. Archive photo via Jack Spitser/Spitser Photography

As always, the roster consists almost entirely of current and past NCAA swimmers, along with a couple of future NCAA swimmers. At the Tokyo 2020 Olympics, Georgia was the NCAA program with the most past, present, or future swimmers on the team with 7: Allison Schmitt, Hali Flickinger, Olivia Smoliga, Chase Kalisz, Nic Fink, Gunnar Bentz, and Jay Litherland.

This year, only Flickinger, Kalisz, and Fink are back on the team, but Luca Urlando got on the squad as well, bringing the school’s total to 4 for Budapest. That ties Georgia with Virginia and Stanford for the 2nd-most swimmers on the World’s roster. Notably, both Stanford’s and Virginia’s 4 swimmers heading to Budapest are women.

Other notable drops for schools this year include Cal and Indiana. At the Tokyo 2020 Games, Cal had 6 swimmers on the roster and this year only Ryan Murphy and Trenton Julian will rep that school in Budapest. Additionally, Indiana sent 4 swimmers in Lilly King, Zach Apple, Blake Pieroni, and Michael Brinegar, but only Lilly King made it back onto the team this year.

The school with the most people on the team this year is freestyle-centric Florida with 6. Natalie Hinds, Caeleb Dressel, Bobby Finke, Trey Freeman, and Kieran Smith qualified for the team. Future Gator Bella Sims, who will join the school in the fall of 2023, brings the total to 6. Notably, Katie Ledecky, who swam collegiately for Stanford, is now a part of Florida’s pro group, meaning that there are actually 6 people who are currently training at Florida on the team.

After Florida, Georgia, Virginia, and Stanford, 3 schools have 3 swimmers on the team: Ohio State, Texas, and NC State. There’s a slight asterisk next to Ohio State, however, because Annie Lazor only raced 1 season there before transferring to Auburn. Two Ohio State freshmen made the team in Hunter Armstrong and Charlie Clark, which is a strong showing for the school.

Several of the 2022 NCAA Championships qualified for the Worlds team this year including LSU’s Brooks Curry who won the 50/100 free at NCAAs and will race the 100 freestyle individually in Tokyo. Other NCAA Champs who made the team are Drew Kibler, Bobby Finke, Kate Douglass, Katharine Berkoff, Regan Smith, and Alex Walsh.

The lists below are based on where swimmers attend or attended college, not where they are currently training.

Note: we know that not all of the swimmers listed above are currently training with the universities listed. While this is an important detail for coaches, for most swim fans, and especially for casual sports fans who might pick up the meet, the excitement around the tribalism of collegiate programs trumps that. The tallies below include current, future, and former collegiate programs.

Isn’t Shaine Casas with Texas now? Putting them up to 4?

As far as we know, he is not attending classes at Texas. He is definitely never going to be on the varsity team there.

How come Stanford men’s swim team didn’t enter any swimmers during the world trial at all?

Bella Sims is headed to Florida. Announced that a while ago.

What would a list like this look if it included all the swimmers at World Champs (all former and current college swimmers regardless of nationality)?

It would be very, very long as many countries’ Olympians train in the US. It would include a lot of colleges that most people haven’t heard of, too.

Why doesn’t Charlie Swanson count as swimming for Texas since that is who he trained with to prepare for Trials?

I think it is strictly where they went or go to college and not where they train!

The list is based on where they went to college, not where they are training.

Good thing Zach Apple is being credited to Indiana then! Not like he spent 3 years at auburn

If Stanford gets to count Curzan then shouldn’t Florida get Sims?