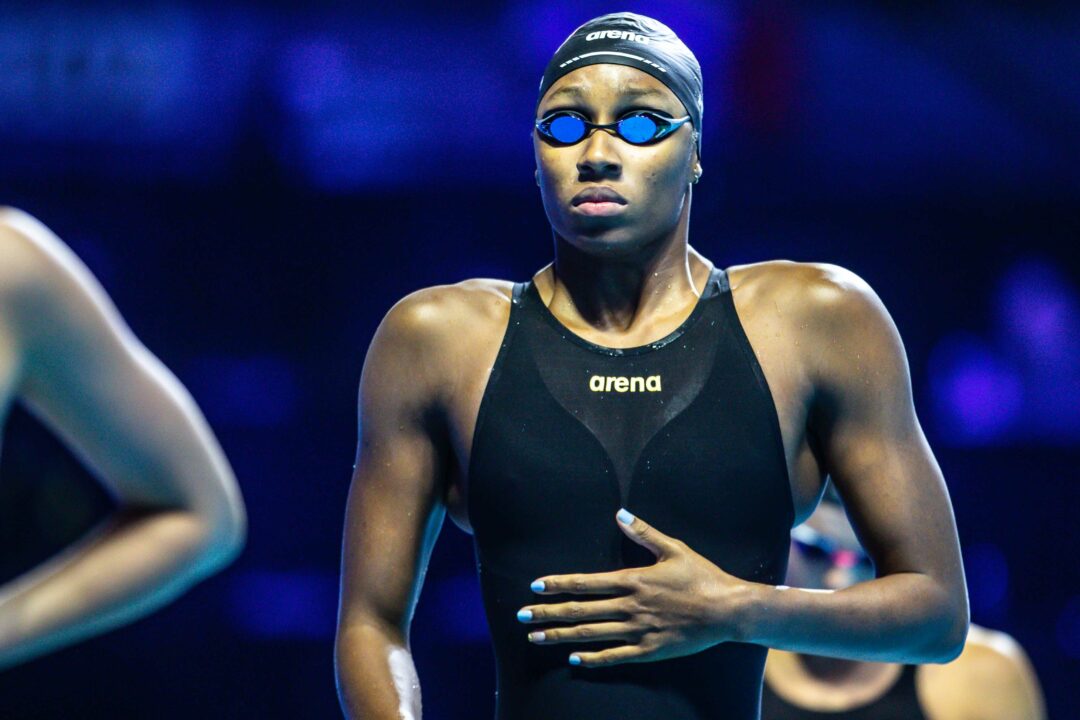 Hinds, who raced collegiately for the University of Florida but has been training in Georgia, announced that she has returned to train with the Gators. Archive photo via Jack Spitser/Spitser Photography

Just over 3 years into her return to competitive swimming, Olympic bronze medalist Natalie Hinds has made a return to the University of Florida. Hinds raced collegiately at Florida from 2012 until 2016, retired from the sport after 2016 Olympic Trials, and made a comeback to the sport in 2018.

Two years later at the 2021 US Olympic Trials, Hinds swam her way to a spot on the US Olympic team for the 4×100 freestyle relay. She swam a 53.84 for 4th place at Trials, booking herself a plane ticket to Tokyo. Hinds swam during both prelims and finals for the women’s 4×100 freestyle relay at the Games. In the former, she posted a 53.28 anchor split, which was the fastest split on the American women’s squad.

Since she made the move to Georgia, Hinds has also raced professionally for the Cali Condors in the International Swimming League, contributing to her team’s league win in 2020.

While she found great success as a pro swimmer in Georgia, Hinds has now made the move back to Florida to train at her alma mater. Hinds landed on the podium at NCAA Championships a number of times including when she earned 100 freestyle bronze in both 2013 and 2015. She also won the SEC 100 freestyle title in 2015 and 2016.

Hinds is the second US Olympian to join the Florida pro group since the Tokyo Games as long-time Stanford swimmer and distance swimming legend Katie Ledecky joined the squad in the fall. Hinds will become the 5th Olympic medalist at Florida, joining current NCAA swimmers Kieran Smith (Olympic bronze in the 400 freestyle) and Bobby Finke (Olympic gold in the 800 and 1500 freestyles), and Caeleb Dressel (Olympic gold in the 50/100 freestyle, 100 butterfly, 4×100 freestyle, and 4×100 medley).

During her time at Georgia, Hinds and fellow Olympian Olivia Smoliga became good friends and training partners and both raced for the Cali Condors. Smoliga finished 3rd in the 100 freestyle at Olympic Trials and swam with Hinds in the Olympic prelim. Since the Games, Smoliga has also switched training bases, making the move to Arizona State this past fall.

Others who have announced departures from the Georgia crew since the Olympic Games include Melanie Margalis and Nic Fink, both of whom are now training in nearby Atlanta.

How old is bauerle? Is it possible that’s he’s told the pros he’s retiring soon and it might be smart to find somewhere now to train consistently going into the next quad? (Or tri? In this case)

I had the same thought, but have no info to back that up.

He does have an absolutely enormous contract. Which I suppose could both motivate him to stay, or give him the financial freedom to retire.

I did not realize he was 70 already. He’s consistently seemed like he’s 52 for for the past decade.

I was thinking the same thing. He may have said he won’t be around come Paris, and he didn’t want to leave them in a lurch.

Maybe with all of the UGA money that’s available,the AD can get Gainesville,Ga.(40 miles to the west of Athens) Blaire Bachman to be the new Head Coach for the entire Swimming & Diving teams.

She has Williams Moreno to fight first

Natalie Hinds is from West Texas, attended Midland High School. Few weeks ago she visited University of Texas Permian Basin (D2) where our twin daughter swims. Here is a link with their photo with Natalie. They also say she is very nice and very tall.

what is going on here

She’s not required to give her time in that way. And this website and its viewers aren’t entitled to it either. Especially after the way many commenters responded to her struggles this past year… after 4 years of extremely clutch and consistent swimming, she deserves so much respect. If she’s not giving interviews, let’s not just assume it’s because she “doesn’t like the media”.

Have you ever seen Lionel Messi or Cristiano Ronaldo go for several months without giving interviews?

Swimmers need to be professional, if they want to grow the sport.

At the end, you see many swimmers complain about the lack of financial support. I wonder why?

Literally every professional athlete I’ve ever heard of has gone several months without talking to the media. Its called the off-season.

While I agree that Hswimmer seems to be triggered by any mention of Simone, in this case he is right that Simone has said she doesn’t like the media.

Which is weird because she launched a media company. It hasn’t really taken off (only 89,000 followers on IG, which is far fewer than any of its four founders, led by the 9.4 million follower Alex Morgan), and none of the four actually mention it in their bios, so my suspicion is that they were given some sweat equity to just attach their names to it passively.

Simone seems to like media when she thinks she can make money off it. Good for her, that’s her prerogative, but commenter above is… Read more »

So Manuel’s goal should be to please people who will find any reason to put her down for the sake of winning “passionate long term fans”? LOL

Yes her existence seems to trigger Hswimmer…can’t imagine why

I didn’t know asking a question on where or how an athlete js was triggering?

But you did not just ask a question. You also threw shade. And did Manuel specifically say that she doesn’t like media or did she disagree with some of the ways media approached athletes and certain situations?

Maybe she doesn’t like to do SOME media because people always assume the worst about her (no matter what) and there are different rules and standards for her than for other swimmers.

What makes some think that Manuel only likes media when she thinks she can make money? Again, assuming the worst. And anyone who thinks Manuel hasn’t had her share of trade offs in this space has either not been paying attention to her career or just flat out refuse to… Read more »

I don’t think she owes us anything. As a swim fan I wish she would swim more meets. She could already be retired right now for all we know. The other thing I would say is that she doesn’t need the media to reach out to her fans, she can go direct by using social media but she does not engage her fans that way so I conclude she chooses to stay private.

Simone has had multiple racist experiences with the media. Back off.

11
0
Reply
Did Peaty receive his payments ?

Braden, are ISL athletes still unpaid from season 2 ? and when are they going to get their money from this season?

What’s happening in Athens? Too much focus on the 4 IMers and mid D& distance swimming? Seems like sprinters and stroke specialists are leaving. I know Bauerle is an amazing coach but I am curious what is triggering all these athletes leaving after such a successful year training in Athens.

A lot of them have been there since college (not Natalie obviously). Maybe they just need a change of scenery? Not sure though, it does seem like a mass exodus.

It’s rare to get any real honesty or transparency on these decisions, but I think it might not have anything to do with Bauerle or Georgia’s training and might be a “generation” thing. The swimmers who are leaving are all in their mid to late 20s. Some are looking for dry jobs (Fink, Margalis), which is much easier to find in places like Atlanta. Smoliga has been in Athens for a LONG TIME, and I think maybe as you start to get into your mid-to-late 20s, living in a fairly-isolated college town could get old. Then there could be a cascading effect, whereas the training group dwindles, people re-evaluate.

I would suspect it’s some combination of the above. Maybe Smoliga… Read more »

Has happened before with the UGA group and to others around the country, almost always after an olympic quad.

Plus, just looking at the social accounts of this pro group over the past months, you can tell the respect and love they have for Jack and co so dont think theres any bad blood per se

I agree, this is a natural and normal thing.

I was never an elite athlete, but I can’t imagine training in the same place for 8 or 9 years and not being ready to try something different. I’ve been living in the same neighborhood for 15 months and I’m already ready to move.

I love a world where an athlete can decide that they’re better off training somewhere else without nuking the relationship with the coach who has trained them for years. And vice versa.

Yeah that makes sense. I hadn’t really thought of the hinderance of professional development out of/after swimming when you spend your entire 20s in a college town. Seems like these moves are for reasons outside of just training

Yeah I think she’s been at ASU for awhile now.

She did, but that was more than a year ago.

Andrew Wilson also trained at Georgia until he retired from international competition after the Olympics.