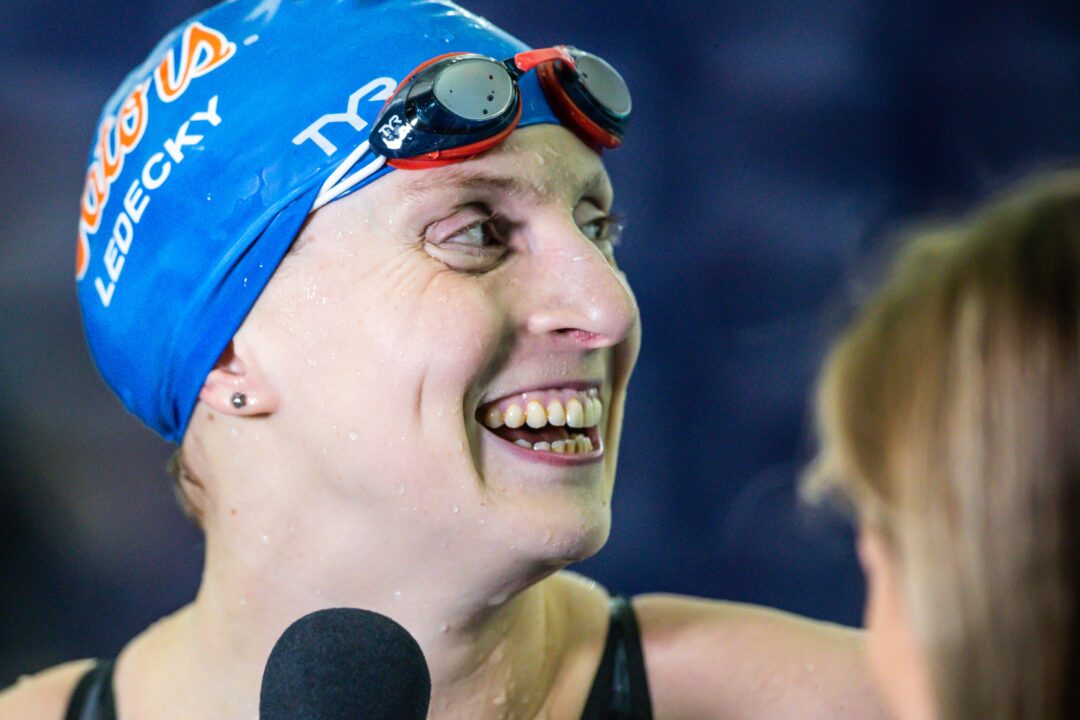 Katie Ledecky has qualified for her 5th World Aquatics Championships with four scheduled individual starts in the 200, 400, 800, and 1500 freestyles. Archive photo via Jack Spitser/Spitser Photography

USA Swimming has confirmed a roster of 41 athletes in pool swimming for the 2022 World Aquatics Championships, with 21 women and 20 men headed to Budapest to represent the Stars & Stripes.

This is the smallest U.S. team for a primary international long course meet in a while. The 2019 World Championships roster, for example, had 22 women and 24 men. The Tokyo 2020 Olympic roster had 50 pool swimmers, in spite of there being fewer events at the Olympics (37) than the World Championships (42).

The United States has led the medals tables at each of the last 9 World Aquatics Championship meets, and while this year’s roster has many new faces, we don’t expect that to change: the countries with the 2nd-most medals from 2019, Australia, will be at reduced capacity without stars like Emma McKeon, Kyle Chalmers, and Ariarne Titmus, and the country 3rd-most total medals from 2019, Russia, has been barred from competing after invading neighboring Ukraine.

The U.S. has not yet confirmed who will get the second spot in many of the stroke 50s, though SwimSwam’s Robert Gibbs has put together a list of who should be entitled to those spots. USA Swimming also kept with its confusing tradition of listing relay entries for some athletes but not others. Who actually swims on relays at the World Championships is always the coaches’ final decision, with the exception of 6 swimmers who have no individual entries and therefore are required to swim relays: Mallory Comerford, Natalie Hinds, Bella Sims, Coby Carrozza, Ryan Held, and Justin Ress.

As is so often the case after the Olympics, this year’s roster has seen a youth movement. The team will have 7 teenagers on the women’s team this year, and no swimmer on either team in their 30s: the oldest athlete on the team is Nic Fink, just shy of his 29th birthday.

The pool swimming portion of the World Aquatics Championships will run from June 18-25 at the Danube Arena in Budapest, Hungary.

Notes on the team

*Age at start of the FINA World Championships on June 18.

Is swimswam going to post day 5 athletes interviews? Looking forward to it.

it may have been discussed before, why didn’t Kate Douglass swim the 200IM? (instead of the 50 free)

She must have thought she had a better shot in the 50. She was wrong.

She gambled, and she lost. Simple.

Correct me if I’m wrong, 16 of the female contingent return from the Tokyo 2021 Olympics squad:

Are the US having trials for world champs next year? Just that the 2018 trials picked the 2019 team 4 years ago.

Selecting a national team a year in advance is the dumbest strategy USA Swimming has ever undertaken.

2019 nationals should’ve stopped this practice. Held 47:39, Rooney 47.61, Jackson 47.88, Casas 52.7, Urlando 1.54 all from the top of my head. None of them were at worlds despite throwing down some absolutely stunning times. Both Rooney and Held could’ve medaled at Worlds with the times they had!

Baker is getting married this summer. I think she’ll be back to racing next year. Hopefully she can stay healthy going into Tokyo.

Any word on the training camp schedule?

How many swimmers from the national team do you expect will attend the TYR Pro Swim Series Mission Viejo scheduled June 1 – 4?

From the World Championship team? I wouldn’t expect many. Maybe we’ll see a few swim the first day or two and then bounce.

Mission Viejo to Croatia is a much worse trip than (anywhere on the east coast to Croatia).

I guess if you are East Coast based, it would not make any sense to attend the TYR Pro Swim Series Mission Viejo event.

Right. And there’s only two swimmers based in Southern California on the team – Michael Andrew and Justin Ress (and, I guess, the three Sandpipers aren’t too far).

The time change would be 3 additional hours and if you just came from the east coast your body would be all messed up.

Anyone knows who is coaching Nic Fink & Justin Ress atm?

What is the story with Katie McLaughlin? Is retirement from competitive swimming on the horizon?

9
-1
Reply
A b
Reply to  Smith-King-Huske-Curzan