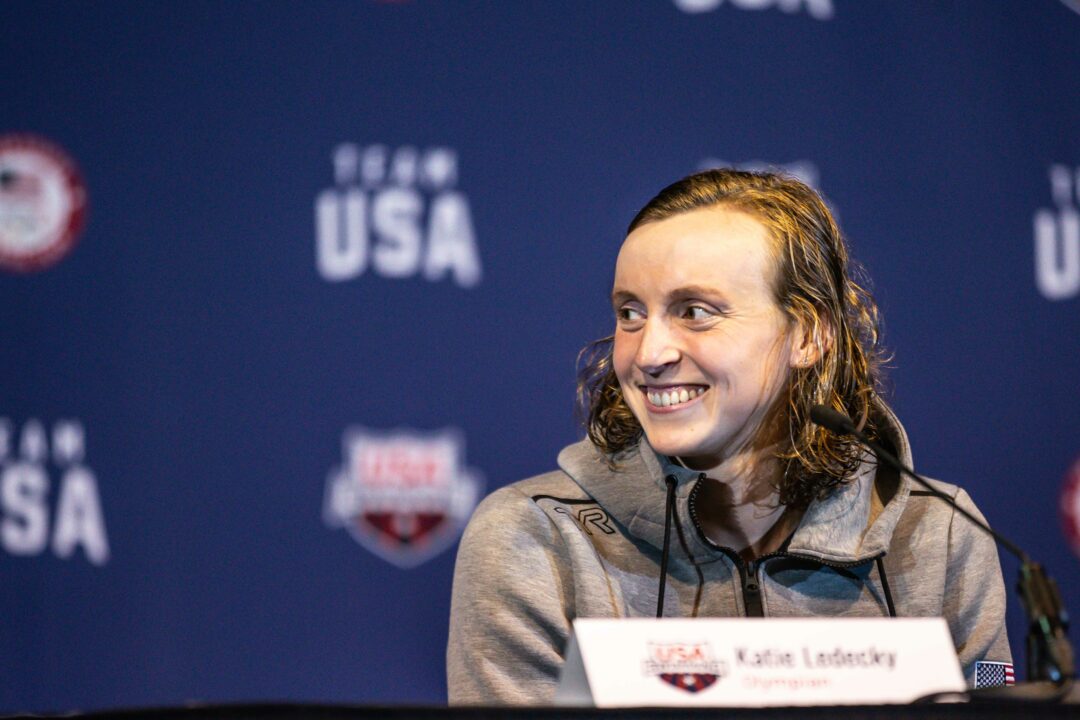 Ledecky says she will train at the University Florida under Nesty to gear up for the 2024 Olympic Games. Archive photo via Jack Spitser/Spitser Photography

Seven-time Olympic gold medalist Katie Ledecky is headed east to train at the University of Florida, she announced on Instagram Wednesday morning.

Ledecky says she will train under Florida head coach Anthony Nesty and the “outstanding mid-distance and distance training group there” in preparation for the 2024 Olympic Games in Paris.

Ledecky has been training at Stanford University under coach Greg Meehan since beginning her freshman season of college there in 2016.

Ledecky wrote the following on Instagram, adding that being closer to family was a factor in her decision:

“Stanford has been my second home for the last five years. It will always have a special place in my heart. Having completed my college degree this year, I am moving east to be closer to home and family.

I’ve decided to train at the University of Florida with Coach Anthony Nesty and the outstanding mid-distance and distance training group there. I’m looking forward to the opportunities and challenges that lie ahead in the next phase of my swimming career.

My years at Stanford have been nothing short of incredible. I’m so grateful for my coach Greg Meehan, as well as my teammates, professors, friends and everyone in the larger Palo Alto/Menlo Park area who have supported me through these years.”

Ledecky will also serve as a volunteer assistant coach with the program. It’s not uncommon for active Olympians to join coaching staffs as volunteer assistants, as this allows them greater latitude to travel and train with teams that would not necessarily be afforded to them as just a post-graduate trainee.

Being able to tout arguably the greatest female swimmer of all-time as a member of your coaching staff also helps substantially with recruiting. It also allows the athletics department to pay for their travel.

The 24-year-old Bethesda, Md., native completed her bachelor of arts degree in psychology at Stanford this year. She was an eight-time NCAA champion, competing for the Cardinal for two seasons before turning professional in March of 2018.

“I’m excited to be a part of the University of Florida’s world-class swimming and diving program and train for the 2024 Olympics with Coach Anthony Nesty, and the top-tier mid-distance and distance training group,” Ledecky said in a University of Florida press release.

“My years at Stanford, both academically and athletically, were nothing short of incredible and I’m looking forward to the opportunity and challenges that lie ahead in Gainesville.”

Nesty led the revival of American men’s distance swimming over the summer as the primary coach of both Bobby Finke, who won the 800 and 1500 freestyles at the Olympics, and Kieran Smith, who took bronze in the 400 free.

“The knowledge and experience that Katie brings to the pool are unparalleled,” Nesty said. “In addition to her obvious excellence as a swimmer, Katie is an exceptional person who will make a great impact on the student-athletes here. Katie’s values are in total alignment with the Florida program, and we’re so excited to have her join the Gators as she continues to train for the 2024 Olympics.”

Nesty was previously the head coach of just the men’s varsity team at Florida, but starting this season will also take over the women’s program.

Last year, under then-head-coach Jeff Poppell, the middle-to-distance freestyles were a strength of the Florida women. They scored 112 points in the mile, which is more than they scored in any other event. Their second-best scoring event was the 500 free, with 90 points, as they finished 2nd as a team at the SEC Championships. Among the swimmers in that group is rising junior Tylor Mathieu, a former Futures Champion in the 800 free.

The University of Florida will now be the training base of America’s two most prominent active swimmers: Caeleb Dressel trains there as a post-graduate under former Florida head coach Gregg Troy.

Ledecky’s coach since 2016, Meehan, offered some thoughts on her departure from Stanford.

“It’s been an honor and a privilege to coach Katie these past five years,” Meehan told SwimSwam. “Beyond the records, medals and championships, she is an amazing woman. Stanford is simply a better place and I’m a better coach because of Katie’s time here. She’s become family.

“While we are sad to say goodbye, we are thrilled for Katie’s next journey. Coach Nesty and I have talked quite a bit these past few weeks and I believe Gainesville is going to be a great fit for this next phase of Katie’s career.”

Prior to joining Meehan at Stanford, Ledecky trained at Nation’s Capital Swim Club under coach Yuri Suguiyama and eventually Bruce Gemmell, who she trained under through the 2016 Olympics.

Ledecky is a three-time U.S. Olympian, winning gold in the women’s 800 freestyle in her debut at the 2012 Games in London. She followed up with a dominant four gold, one silver medal performance at the 2016 Olympics in Rio, and added two gold and two silvers this past summer in Tokyo.

While she remains the best female 800 and 1500 freestyler in the world, Ledecky was beaten head-to-head in the 400 freestyle in Tokyo by Australian Ariarne Titmus, who also won the World title in the event over an ill Ledecky in 2019. Having also failed to medal in the 200 freestyle at the Olympics (having won in 2016), Ledecky hasn’t hit a personal best time in one of her four primary events since 2018 (1500 free), and her current PBs in the 200, 400 and 800 all remain from 2016, which could be a factor in her decision to change training bases.

Ledecky also owns 15 Long Course World Championship titles, including having won four in a row in the 800 free, along with eight Pan Pacific Championship gold medals.

On women swimmers allegedly improving less at Stanford than elsewhere: Everyone knows that female swimmers tend to peak earlier than male ones. In general that seems to have more to do with body development than how well they’re training. And other things being equal, the faster someone is, the closer they are to their peak (whether past it or not). So we should expect the fastest female high school swimmers to improve less than their peers during their college years. And we should expect college teams that attract the best female swimmers to show less improvement overall.

It would be interesting to see actual numbers comparing time drops among top HS recruits at different colleges. I wouldn’t be surprised if… Read more »

Did you not watch her swim in the Olympics?. That fire is still burning hot inside her. I for one am hoping she can do the nearly impossible in the next 3 years. However, a lot will depend on the Worlds next year. All those wanting to defeat her will be there. She may have to re-evaluate. You do know that she was an academic All American at Stanford before she turned pro. 3.99 GPA. As a retired college prof, I can tell you that it is very tough to graduate in 4 years from any university much less a top ranking academic school. This increased my respect for her work ethic even more.

6
0
Reply
Sweet on the Sweets?

As mentioned: seemed to have a great training relationship with True Sweetser. He’s a Gainsville product; one in a family line of Troyists disciples.

Finke and Smith are great, and Nesty is now the pope of Troyism.

Who knows, maybe True and she had a talk. Maybe there is more there.

I know True’s doing a masters at Stanford, congrats on the scholarship. But who knows, maybe UF Law School is in the cards next?

Maybe, just maybe, she’s sweet on the Sweets and making moves for the future.

Speculation from left field at best, but its fun to invent narratives, and hey, the two of them were always coy when interviewed together. It could be a great… Read more »

Relationships are weird? Good to know. Read the whole post. It’s punny punch line…and if there were even a chance of it…their kid might be a distance beast.

Relax. Lighten up. Have fun. Watch their interviews. There is chemistry.

Go write about it on wattpad or something then

So what? Seven people are against a person suggesting two intelligent, seemingly kind individuals expand their years long friendship and continue to maintain, honor, and respect their communication.

Still failing to see how their position says anything about me.

Again relax. I qualified the post. Last I checked your not the host or judge and jury.

Wait. Is it April?

This is so exciting, felt like an April Fools post but in a good way. I think she definitely needed this. I can’t wait to see what happens!

Katie and Bobbie could produce some amazing offspring! The ole East German model!

THANK YOU!! there’s some comments from an SI video in 2016 where people wanted phelps and her to have kids like… KL WAS A WHOLE TEENAGER?!?? i swear people scare me

What about Simone Manuel?

Think she is still suffering OTS or something like that!!!!

which is kinda on meehan

Do you all really buy the OTS story, which sounds like doing too much in the pool? From her public comments, it sounds like she let perceived life changes in the country cause her serious depression, which can certainly make peak athletic performance unlikely.

Find joy, Simone. And if you still like it, success will return. Maybe, try some ISL and have fun with it! I hope you do; watching you between 2014 and 2019 was some of the coolest, toughest performance in our sport, bringing great joy to observant fans.

Regardless of whether she continues in the sport at Stanford or elsewhere, I simply cheer for her to be in a place, both physically and mentally, where… Read more »

So you’re her doctor? OTS is real and based on what we have seen of Simone over her career, she is not one who makes excuses. I suggest you research OTS before you accuse her of using it as an excuse. We do not know everything that Simone has gone through but I do not buy for one second that she is making this up.