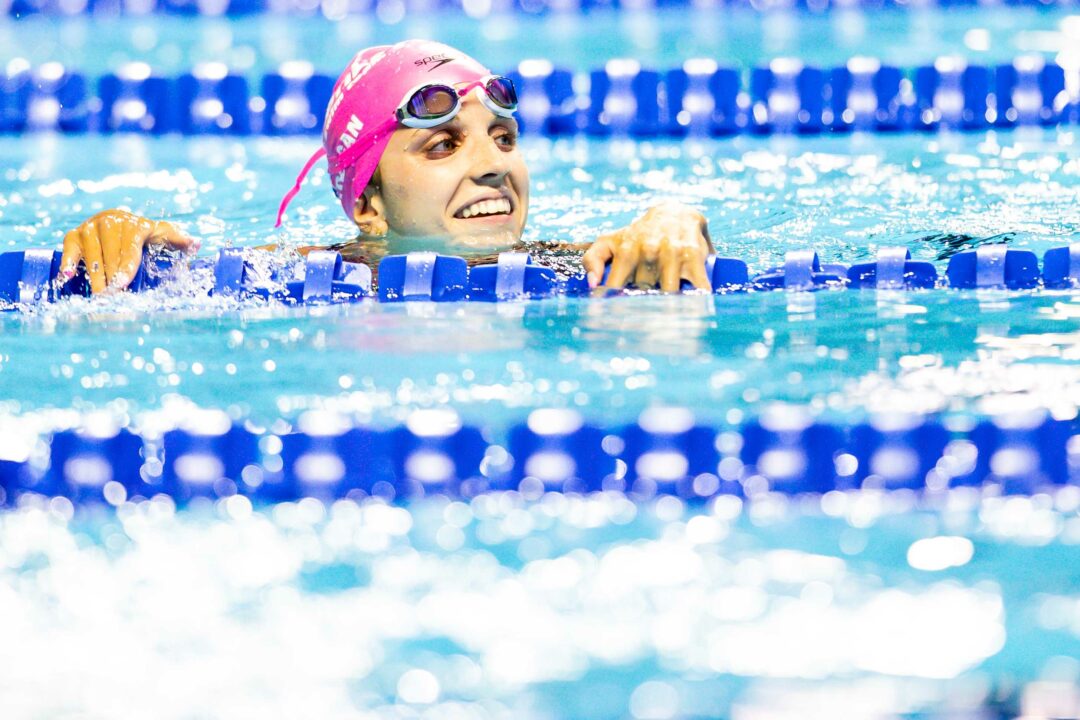 In the 100 fly, Caeleb Dressel looks to build on his 100 free win (and U.S. Open record) from last night. The world record-holder leads the final heat along with NCAA backstroke star Shaine Casas and 4×200 free relay Olympic qualifier Andrew Seliskar. In the other heats, it’s veterans looking to bounce back: Maxime Rooney leads heat 8 after missing the 100 free final; Jack Conger and Tom Shields lead heat 7 as they try to make repeat Olympic appearances for Team USA.

Keep refreshing this page for live, event-by-event recaps of all the action from Omaha.

Katie Ledecky dominated this morning’s heats, going 8:16.61 for the top spot. That’s just outside of the top 25 performances of all-time – of which, Ledecky owns 24. The only non-Ledecky swim still in that mix is the former world record of 8:14.10 from Becky Adlington in 2008. Adlington sits #24 all-time, so Ledecky could theoretically take over the entire top 25 in history if she can crack 8:14 tomorrow night, and then again at the Olympics.

16-year-old Bella Sims of the Sandpipers of Nevada continued her outstanding meet, qualifying second in 8:27.45. Sims is likely on the Olympic team as a relay swimmer for the 4×200 free relay, but she’ll now have a shot to add an individual event. Sims was four-tenths off her career-best time, which ranks #5 all-time in the 15-16 age group. Keep an eye on her in the final – she could move to #3 all-time behind Ledecky and Janet Evans if she can go 8:22.45 or faster in the final.

1500 free runner-up Erica Sullivan should also be in a great spot for another Olympic berth. Sullivan should make the team in that 1500, and she won her heat this morning in 8:28.67.

Wisonsin Aquatics (and Penn State alum) Ally McHugh has been in the hunt several times already this week, and she gets to chase an Olympic berth as the four-seed heading into tomorrow’s final. It’s a Big Ten-heavy field with Purdue alum Kaersten Meitz and Michigan alum Sierra Schmidt all in the top 8.

15-year-old Katie Grimes of the Sandpipers of Nevada crushed an early heat in 8:31.73 – that was a 5.7-second drop and moved her up to #18 all-time in USA Swimming’s 15-16 age group. Grimes snuck into the final in 8th place and will get another swim tomorrow night. Out of that same heat, 16-year-old Cavan Gormsen went 8:39.03 to drop a second and move to #58 all-time in the age group.

Caeleb Dressel‘s butterfly always seems to be a little ahead of his freestyle in-season, and with Dressel likely saving his full taper for the Olympics, we saw a similar story play out this morning. Dressel cracked the U.S. Open record set by Michael Phelps back in 2019, going 50.17 this morning. That’s the #1 time in the world this season, just shaving .01 under Kristof Milak‘s time from the European Championships last month.

Beyond Dressel, though, the field looks completely wide open for the second Olympic spot. There was more than a second and a half this morning between Dressel and the rest of the field. That also suggests that if Dressel wins the 100 fly and 100 free, he’ll probably wind up the butterflyer on the U.S. medley relay, as the dropoff here is steep compared to the dropoff from Dressel to Zach Apple in the 100 free.

Trenton Julian and Tom Shields – two Cal Golden Bears – tied for second in 51.71. Shields was the second Olympic entrant behind Phelps in this race in 2016 and just might be in a spot to do the same thing this time around behind Dressel.

At one point, Maxime Rooney looked like the clear-cut #2 U.S. swimmer behind Dressel in this event. Rooney went 50.68 back in 2019. He’s easily into the semifinals, but sits 11th and will need a big swim to move on to the final.

A few big names were clipped for the semifinal spots. #1 overall recruit in the high school senior class Aiden Hayes had a lifetime-best 52.67, but ended up 17th – though he could scratch in. Jack Saunderson, the #6 seed coming into the meet, finished 24th.

World record-holder Regan Smith made it 3-for-3 with the favorites holding onto their #1 seeds this morning. Smith was 2:07.81, one of just four women under 2:10 in heats.

The 19-year-old Smith trains with her Riptide club in Minnesota. Just across the border in Wisconsin is the training base of 18-year-old Phoebe Bacon, who qualified second in 2:08.71. EArlier this year, Bacon hit the #3 spot in USA Swimming’s all-time 17-18 ranks behind Smith and Franklin. Both Smith’s and Franklin’s 17-18 times were the world record when swum.

Lisa Bratton of Texas A&M was the other swimmer under 2:10 this morning, though NC State’s Katharine Berkoff was close.

2016 Olympian Kathleen Baker made the semifinals like she did in the 100 back and 200 IM, but she’ll again be sitting in the 9th-16th range and needing a big swim to move on through tonight’s semifinals. Baker was 11th in semifinals of both the 200 IM and 100 back, and qualified 11th this morning.

in the 1500 m men free.the fastest qualifyer for the final,is some 5 seconds slower(!!) than brian goodells’ winning time at the 1976 olympics, 45 years ago.it were only heats,but it give muche to think on the low level of male distance swimming

I know this isn’t related but why is breakdancing in the Olympics???? And squash etc isn’t? JOKE

Where are the time trials results?

https://www.usaswimming.org/docs/default-source/eventsdocuments/trials/complete-time-trial-results-through-friday.pdf Looks like they’ve been updating these each day.

Rafael did you just delete all of your David posts lmao

Does Rhyan White not get the time of day to even get mentioned in the 200 back discussion. She was vastly over looked in the 100 back and now 200 back.

3 girls of Sandpipers qualify in the women’s 800 free final!
Bella Sims qualifying for the 4X200 free relay
Erica Sullivan making the team in the 1500 free. In the same race Katie Grimes finishes 3rd with a monster new PB in 15.52.
Probably a battle between Sullivan and Sims in the 800 free to take the second spot.
I think SwimSwam needs to do an article about the coaches and the training there.
They do an amazing job.

I’d watch out for Anderson & McHugh too .

Bobo — consensus of some club coaches and others watching is that Sandpipers may be the best performing non-college-centered club at the meet. Their swimmers have been terrific.

Titmus neg split her 800m. Clearly she wasn’t pushing it early in that race.
I’d be a little shocked it Titmus goes any faster than 8.12